To see more information other than history, please visit Abbreviationfinder to learn more about climate, population, government, and economy for the country of Albania. 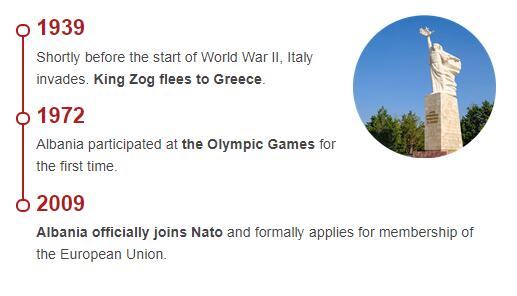 In 1960, the open breach occurred with the USSR. In early summer, Khrushchev told a Greek newspaper that he would discuss the opportunities for cultural self-determination and autonomy for the small Greek minority in southern Albania with Hoxha. This applied to the areas around the cities of Gjirokastër and Korcë, which Greece has traditionally claimed. The Albanians perceived this as if the USSR would support a division of the country. Later in the summer, the Albanians in Bucharest refused to participate in Soviet criticism of China. The USSR used hard funds to maintain its influence in Albania. The Soviet Embassy in Tirana openly supported the opposition in the APA against Hoxha and participated in the preparations for an armed coup against the party leadership. Agreed grain deliveries were withheld and the food situation became critical due to severe drought. China responded by buying too hard currency in France and renting ships for transport to Albania. At the 81st Communist World Conference in Moscow in November, Albanians were condemned for their anti-Soviet politics. During the following months, Soviet technicians and other personnel who had participated in the economic build-up of Albania were recalled. China took over in 1961 after the USSR the role of Albania’s primary financial aid country, in the same way that the USSR had taken over after Yugoslavia in 1948. Chinese aid in the period 1961-72 is estimated at over 500 million. dollars. But China did not have enough resources to provide the same assistance as the USSR, and the Albanian economy during this period could not show the same annual growth as in the 1948-60 period. The financial, political and later military cooperation was greatly expanded in the 1960’s. Albania shared the Chinese views in all the cases that have divided the world communist movement. Albania and China considered themselves the banners of the true Marxism-Leninism that had been betrayed in the USSR and the other Eastern European countries.

Following the pattern of the Cultural Revolution in China, similar campaigns were launched in Albania in 1966-67. The main objective of these campaigns was to change the bureaucracy, religion and the oppressed position of women. People in the administration were forced to work manually a certain time of year. Thousands of churches and mosques were closed. Albania was declared the first atheist state in world history. Although the position of women was given much attention in this backward, patriarchal society, the position of women in Albanian society was not fundamentally altered after World War II, although they were drawn into the labor market.

Up to the liberation of the fascist occupation in 1944, 85% of the population lived in the countryside and 53% of them did not even have their own kitchen garden. In 1967, the government began the collectivization of the land, and in 1977 it was officially proclaimed that Albania was self-sufficient in wheat. According to official information, industrial production increased between 1939 and 92 125 times, the production of building materials by 262 times and the electricity consumption by 322 times.

Albania, along with China, sharply distanced itself from the Soviet occupation of Czechoslovakia in 1968. The Breshine doctrine and the feeling of facing a common enemy also led to some improvement in relations between Yugoslavia and Albania. The “unbreakable internationalist friendship” between Albania and China was based on a shared view of the main contradictions in the world. Both considered the USSR and the United States to be the world’s main enemies, and the battle therefore had to be directed equally to both the two superpowers. This analysis was prevalent in China until the fall of Lin Piao in 1971. After that, China reassessed its analysis and came to regard the USSR as the most aggressive superpower, while the United States was in decline. Against this background, China normalized and expanded relations with the United States.

In 1975, Albania refused to be the only country in Europe to attend the Conference on Security and Cooperation in Europe, precisely because this conference was considered an attempt by the superpowers to consolidate their positions in this part of the world. Following Mao’s death and the purging of the left in the leadership of the CCP, Albania openly distanced itself from China’s new analysis of the main contradictions in the world. Tito’s visit to Beijing (Sept. 1977) and the establishment of friendly relations between Yugoslavia and China contributed to a further deterioration of relations between the two states.

History of Albania
Tagged on: Albania