The area shows traces of human settlement since 200,000 years. In connection with climate change after the recent ice age, the emphasis was shifted south to the southern slopes of the Atlasberg and the Ahaggar and Tibestim massifs (the Capsien culture, c. 9000-5000 BC). Rock carvings show images of rhino, elephant and hippopotamus in areas that are now desert. On the coast there are signs of beginning farming already in the sixth millennium BC. Stone tools and weapons continued to be manufactured well into the Iron Age.

The Phoenician colonization of the 7th century BC affected the coastal land, especially since Carthage had begun to develop into the center of an empire in the 500s and 400s BC. However, this affected the few nomadic tribes in the inland: ants in the west, numids in the east, gaetuls and Libyans on the border with the desert. During the 300s and 200s BC larger state formations were created, mainly by princes such as Massinissa and Syfax, who were in contact with Carthaginians and Romans. To see more information other than history, please visit Abbreviationfinder to learn more about climate, population, government, and economy for the country of Algeria.

Massinissa was rewarded by the Romans for their services in the Second Punic War with land deprived of Carthage; hence the Kingdom of Numidia was created. During his reign (201–148 BC), a significant increase in grain production was carried out. Year 46 BC Numidia was incorporated with the Roman Empire as the province of Africa, of great importance to Rome’s grain supply. The Kingdom of Mauritania, which was economically and culturally underdeveloped, had to live until 40 AD, when its last king was executed and his country transformed into the provinces of Mauritania Caesariensis (western Algeria) and Mauritania Tingitana (Morocco). The Romans’ problems with the nomadic people at the desert border continued. Emperor Trajan created a southern border on the Aurès Mountains, and a little later the Romans built a rampart and a tomb for protection. The vandals conquered the country 429-435. 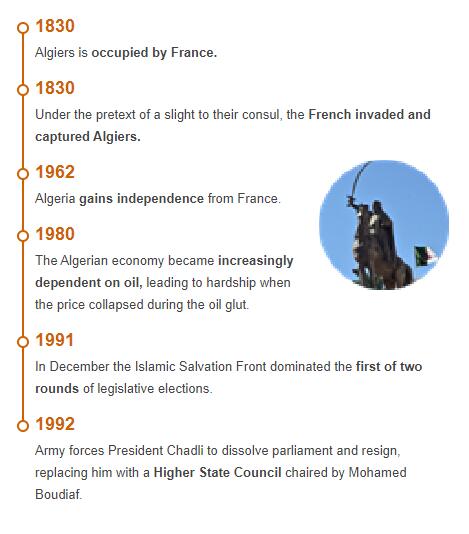 Algeria gained its present borders in the north during the Turkish rule (1587–1830) and in the south during the French era (1830–1962). Until the end of the 19th century, the area consisted of fairly independent village and city republics, sometimes united in federations, which for shorter or longer periods united in the larger kingdoms. The empires and conflicts of the Mediterranean region and the long-distance trade across the Mediterranean and through the Sahara have shaped Algeria’s history. Historical writing has often taken place from the perspective of the conquerors, and only with the independence of Algeria has a more systematic domestic and national perspective been established.

In the 670s, the real Arab conquest of Algeria began. Despite opposition from the Berber , Maghreb (Algeria, present-day Libya, Tunisia and Morocco) in 711 became a province of the Arab Empire. However, final Islamization and Arabization took a few centuries. From the 8th century, a flourishing period prevailed in Algeria. A larger empire united around Tahart (761–909) with an ascetic and egalitarian form of Islam, Kharijism, spread in Algeria as a unifying ideology. It was followed by the Kingdom of the Hammas (with its center near Bejaïa, 1007–88), which developed trade with Europe, Africa and the Orient. These kingdoms were incorporated into the empires, ruled by Muslim dynasties, which united the Maghreb and Muslim Spain from the west; Algeria was dominated by the almoravids in 1073–1147 and 1152–1213 of the Almohads.

Already during this period of glory, the beginning of a decline can be seen: the economy deteriorated as the crusades closed the Mediterranean to North African traders and when the Algerian trade rights of the Almohads were sold to Italian trading cities. The political divide worsened when the Cairo Caliph in 1079 sent two large nomad tribes from Egypt to Maghreb. In addition, from the 15th century, Europeans began to trade directly with sub-Saharan Africa, at the same time as Algeria was drawn into the great conflict between the Muslim Ottoman Empire and Europe. Algeria was divided, the kingdom of the Zayanids (centered in Tlemcen) was weakened, and the citizens of Alger demanded an acute Spanish threat of Ottoman protection (1527).

Algeria became an autonomous province of the Ottoman Empire and was ruled by a Turkish military oligarchy, led by a dey in Algiers and three subordinate Beyards in Constantine, Oran and Médéa. The Turkish military was few, and their power was based on alliances with local religious and profane leaders with the right to collect taxes. However, pressure from Spain, and later Britain and France, did not decrease, and coastal cities were attacked and occupied on repeated occasions during the 17th and 18th centuries.

With a view to appearing mainly in Britain, France attacked Alger in 1830. Dey left the country, while the Bey in Constantine in the east and Emir Abd el-Kader in the west led the resistance. Abd el-Kader built a state apparatus and a modern army. The French won, but extensive resistance continued until the turn of the century.

French colonization had a strong impact on Algeria. The country became a population colony, and at the turn of the century there were 600,000 French in the country, half of whom were naturalized Spaniards, Maltese, Italians and Jews. The colonial economy was focused on agricultural exports (mainly wheat and wine), and about 2.7 million hectares of arable land were expropriated using all means and taken over by the colonizers. The Algerian farmers were depleted and degraded socially to farm workers. From the 1910s, many also became soldiers and industrial workers in France.

During the interwar period, the quest for independence became clear. In France, Messali Hadj (1898–1974) founded a radical anti-colonialist organization among emigrant workers (L’Étoile North Africa), while in Algeria a Muslim reformism led by Sheikh Ben Badis (1889-1940) saw independence as a longer-term goal.. The bourgeoisie previously focused on assimilation with France was radicalized under the leadership of Ferhat Abbas. Algeria was under the Franco-German ceasefire in 1940 under the control of the Vichy regime until US and British troops landed in Algeria in November 1942. In May 1945, large demonstrations of freedom and independence broke out. They were hit by repression, and several thousand people died, including hundreds of Europeans.

The actual liberation war began on November 1, 1954, when several armed actions were carried out at the same time as the formation of a liberation front, FLN, was announced (see the Algerian revolt). With the neighboring countries as the base, the war continued until 1962, when the French government under Charles de Gaulle in the Evian agreements agreed to complete independence. After a referendum in both countries, Algeria became independent on July 5, 1962. About half a million Algerians had been killed during the war and two million were displaced. Almost the entire European population (nearly one million) left Algeria.

Ahmed Ben Bella became the country’s first head of government and president. In 1963, a brief war with Morocco broke out on the border crossing. Colonel Houari Boumedienne seized power in 1965 through a coup. Despite attempts at a coup d’état and rebellion in 1967, Boumedienne retained power until his death in 1978, when he was replaced by Colonel Chadli Ben Djedid.

Algeria has, during its independence period, pursued an active foreign policy and played an important role in international organizations and negotiations. The country has been a leader in the efforts to establish a new economic world order. However, following an extensive youth uprising in the autumn of 1988 and the adoption of a new democratic constitution in the referendum in February 1989, an increasingly deep political crisis broke out. The political institutions collapsed, President Chadli was forced to resign in January 1992 and was replaced by Mohammed Boudiaf (1919–92), who was assassinated in June of that year.

The confrontation between police and military, on the one hand, and armed Islamists from several different organizations, on the other, became increasingly violent. It is estimated that more than 100,000 people were killed in the 1990s, while about as many fled abroad to escape either the authorities or threats from the armed groups targeting individuals, journalists, intellectuals or others who were considered to go to the regime’s affairs. The largest opposition party, the Islamic Rescue Front (FIS), was banned in 1992, and parts of the other opposition found it difficult to operate freely.

Only in November 1995 did some normalization occur; Presidential elections took place, and former President Liamine Zeroual was named among four candidates. The reconstruction of the institutions was completed in 1997, parliamentary elections were held in June and local elections in October of the same year. The election results and the early presidential election of 1999, when Abdelaziz Bouteflika became Algeria’s first civilian president since the 1960s, were disputed. The security situation worsened in 1997 due to several massacres with hundreds of civilian villagers killed at every opportunity.

Algeria during the 2000s

Slow stabilization took place in the early 2000s, among other things by amnesty attracting Islamists to lay down arms and the GIA (Groupe Islamique Army) terrorist group being crushed by the government army at the end of 2004. However, throughout the first decade of the 2000s sporadic violence up, but without equally devastating consequences for the civilian population. The second dominant Islamist armed movement, the GSPC (Groupe Salafiste pour la Prédication et le Combat), changed its name to the L’Organization Al-Qaïda au Maghreb Islamique in 2007 (most commonly known as the English abbreviation AQIM) and has mainly engaged in attacks against security forces., as well as kidnappings of Westerners in the countries of the Sahel region south of Algeria.

Alongside the Islamist violence, Algeria was also shaken by strong protests among the Berber minority in the early 2000s. As a result of the unrest, the Parliament, through a constitutional amendment in 2002, recognized the Berber language tamazight as a national language alongside Arabic.

Despite tearing down in the FLN government, President Bouteflika was re-elected by a large majority in 2004 and FLN has been able to maintain his dominance in parliament. A constitutional amendment in 2008 abolished the rule for a maximum of two terms of office for the country’s president, after which Bouteflika could be re-elected in 2009 and 2014. The restriction was re-introduced in 2016. Since Bouteflika’s plans to run for a fifth term in the 2019 elections, the president chose to resign at the beginning. of April the same year.

The Arab Spring, the wave of protests that spread across North Africa and the Middle East in 2011, also reached Algeria. However, unlike several other presidents in the region, President Bouteflika managed to retain power. Some concessions to the protesters’ demands were made, for example, the state of emergency was introduced in 1992 and freedom of the press and opinion was strengthened by a new media law. The regime also responded with violence, and demonstrations in Algiers and other cities were brutally beaten.

Following the resignation of the aging President Bouteflika in 2019, popular protests erupted with demands for democratization and reduced military rule. The country’s new president Abdelmadjid Tebboune (born 1945) was elected to a very low turnout (40 percent), partly because the election was boycotted by the protest movement.

History of Algeria
Tagged on: Algeria