The older Stone Age, the paleolithic, is well known from cave surveys and open settlements. The oldest finds are from the early Paleolithic (about 1 million – 300,000 years ago). Among the finds from the Late Paleolithic (about 40,000-11,000 BC), very small edging tools, microliters, are common. Neolithic is not so well known; as in neighboring Asia Minor, metallurgy occurred as early as 4000 BC.

During the latter part of the copper age and the older Bronze Age (c. 3500-2000 BC), Armenia was included in the Caucasian Kura-Arax culture. Now the economy was differentiated into a shepherd culture in the highlands and agriculture in the valleys. From about 1500 BC increased the number of fortified settlements; extensive human sacrifice has been investigated at Lake Sevan. Younger Bronze Age (c. 2000-1200 BC) brought cultural influence from Assyria and the Hittite Empire. During the 8th century BC emerged the Urartic empire, which in the following century came to incorporate the area around Lake Sevan (see Urartu). 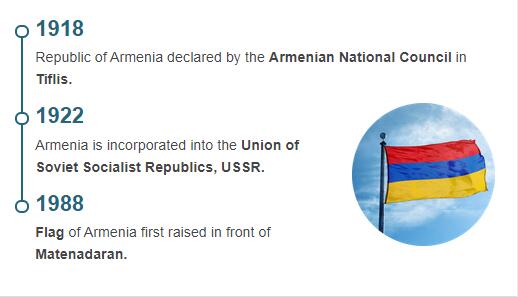 For Armenian history from the 8th century BC to 1921, see the historical region of Armenia (History). To see more information other than history, please visit Abbreviationfinder to learn more about climate, population, government, and economy for the country of Armenia. In 1922, Armenia was united with Georgia and Azerbaijan in the Transcaucasus Federal Soviet Republic. The restoration of law and order made the Soviet empire popular during the 1920s. Also contributing to the popularity was the nationally rooted policy, which was mainly led by Armenian Bolsheviks and which showed respect for the Armenian social structure and culture.

The accelerated modernization and cultural unification of the Stalin era meant major changes in Armenia, which became its own Soviet republic in 1936. Both the collectivization of agriculture and the policy of refreshment met resistance. In the 1930s new integrative Soviet culture, the Soviet friends’ eternal friendship and the superiority of Russian culture were emphasized. The aim was to wipe out the cultural character of the Armenians. Soviet culture was mainly supported by Stalineran’s new bureaucratic middle class without roots in pre-Soviet Armenia.

However, greater Soviet openness during the thawing weather of the early 1960s and late 1980s showed that Armenian culture survived. Individuals and groups within the intelligentsia explained the increasing economic and ecological problems of Soviet society and Armenia with the lack of national influence over their own living conditions, and nationalist groups, in the years around 1990, increasingly demanded their own Armenian state. Successful nationalist mobilization, together with the Communist Party’s lack of legitimacy, finally undermined the Soviet state in December 1991, calling for the Free Republic of Armenia.

However, the formation of an independent state and the transition to a new social system in Armenia were slowed by a conflict with the neighboring Republic of Azerbaijan. Indeed, the national dissatisfaction in Armenia came from the second half of the 1980s, especially channeled in the struggle for the autonomous region of Nagorno-Karabakh, located entirely within the borders of Azerbaijan but with an Armenian majority. In February 1988, contradictions over the administrative affiliation of this enclave, on the one hand, Armenia and the Armenian people of Nagorno-Karabakh, on the other, Azerbaijan with its Islamic, Turkish-speaking majority population, led to a bloody civil war. In connection with the dissolution of the Soviet Union, this turned into an escalated and uncompromising war between the two free states. Hundreds of thousands of Armenians were forced to leave Azerbaijan and move to Armenia or the Russian Federation.

In the vacuum that ensued after the fall of the Soviet state, both international organizations and regional powers have interfered with the war, asserting their economic and security interests and seeking to establish a peace settlement.

Following major Armenian successes in 1993, a Russian-mediated ceasefire was reached in 1994. This led to Nagorno-Karabakh and large areas outside the area itself, which comprised approximately 20 percent of Azerbaijan’s territory, coming under Armenian/Karabakh-Armenian control. The ceasefire has largely been maintained since then, but disputes occasionally erupt, most recently in December 2016.

Since April 1992, the so-called Minsk group under the Organization for Security and Cooperation in Europe (OSCE) has tried to achieve a peace solution but without much success. The Minsk Group has been headed by the Russian Federation, the United States and France since 1997. The most difficult issue in the negotiations concerns Nagorno-Karabakh’s political status.

Armenia’s first post-independence president, Levon Ter-Petrosian, was prepared in the late 1990s to agree a compromise with Azerbaijan on a peace settlement, which contributed to his resignation in February 1998. He was replaced by Robert Kotjarjan, who before he was named prime minister of Armenia in 1997 had been president of Nagorno-Karabakh. In the negotiations, Kotjarjan took a tougher line than its predecessor and, as the President of Armenia, was able to give increased force to the demands of the Karabakh Armenians, as they were not formally represented at the negotiating tables due to the intergovernmental format.

Armenia’s third president, Serzh Sargsyan (former prime minister and leader of the Nagorno-Karabakh Defense Committee in the early 1990s), maintained the tougher line of negotiations with Azerbaijan. At the same time, he put a normalization of relations with Turkey high on the foreign policy agenda. In 2010, the two countries’ foreign ministers signed a protocol on the establishment of diplomatic relations between Yerevan and Ankara and the opening of the closed border between Turkey and Armenia since 1993. However, the protocol has not been ratified by the Armenian parliament as it is considered that Turkey contravenes the document imposing requirements related to Armenia’s relationship with Azerbaijan.

Just as in the early 1920s, the Russian Federation is becoming more and more clear as the great power that the relative confidence of the Armenians and through military presence in the war zone guarantees fragile peace. In 2013, Armenia decided to suspend the negotiation of an association agreement with the EU in order to join a customs union controlled by the Russian Federation.

Like the South Caucasian neighboring states, Armenia has faced great difficulties in the post-Soviet transition to democracy and market economy. The most important parties are linked to financial groups and the corruption is extensive. However, the country has one of the more developed civil societies among the former Soviet republics. This was reflected in the extensive protest demonstrations conducted in April 2018 against the President Serzh Sargsyan.

Sargsyan, who had then completed his second term as president, could, according to constitutional changes initiated by himself, achieve the post of prime minister. Sargsyan, who was criticized by the opposition for carrying out a coup to maintain his dominance over the country’s politics, accepted the protesters’ demands and resigned from the post of prime minister after a week. Nikol Pasjinian was elected new Prime Minister in May 2018.

History of Armenia
Tagged on: Armenia