Important findings from the Middle Paleolithic (about 300,000-40,000 years ago) have been made in Azerbaijan. The transition from the Mesolithic to the Neolithic (around 9000 BC) is poorly known, but local influence was likely to be strong, as in other parts of southern Caucasus. The use of metal was introduced relatively late in Azerbaijan, probably only during the 2000s BC. Then many so-called tell settlements also appeared, and irrigation began to become commonplace. Parts of Azerbaijan were covered by the Caucasian Kura-Arax culture during the older Bronze Age.

During the second millennium BC the already well-developed contacts with Mesopotamia and Asia Minor increased in scope. Iron began to be used around 1,000 BC, and the iron smith quickly reached a high level. From the earlier half of the millennium BC cultural influence from the steppe region can be plagued in the north, probably a result of real pressure from northern nomadic people. During the 600s BC southern Azerbaijan was incorporated into the kingdom of the Medes and during the following century in the Persian Empire. 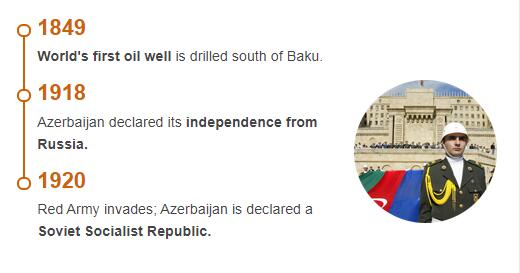 For the early history of Azerbaijan until 1828, see Azerbaijan (Area of Ancient Asia). To see more information other than history, please visit Abbreviationfinder to learn more about climate, population, government, and economy for the country of Azerbaijan.

The Russian conquest of Azerbaijan in 1828 meant few interventions in the feudal social structure. The abolition of living property in the central parts of Russia in 1861 hardly affected Azerbaijan. The change process was concentrated in Baku, where a rapid, foreign-financed expansion of the oil industry created entirely new social conditions.

The Russian revolutions in 1917, the end of the First World War and the Turkish-Ottoman aggression created contradictions throughout Transcaucasia. In Azerbaijan, the Nationalist Muslim Democratic Party (Musavat) opposed Baku’s working groups, in which the Bolshevik influence rapidly increased through the support of large groups of returning soldiers. Co-operation with Armenia and Georgia against the Ottoman Turks was made impossible by Musavat’s Proturkian, pro-Islamic stance.

Following the defeat and downfall of the Ottoman Empire, the Independent Republic of Azerbaijan was established in 1918 under British supervision. After the international support ceased, it succumbed to the Bolsheviks in April 1920. Azerbaijan, together with Georgia and Armenia, became part of the Transcaucasus Federal Soviet Republic (Transcaucasia) in 1922 and in 1936 became its own Soviet republic. The national resistance in Azerbaijan, which often took on religious expression, was always combated by Soviet power. Domestic culture was counteracted by the introduction of the Cyrillic alphabet and favored by the Russian language.

In the more open societal climate that occurred at the end of the 1980s, increasing dissatisfaction with the Soviet Empire and what was termed Moscow’s predatory operation in Azerbaijan could be freely articulated. At the same time, old ethnic contradictions arose between Muslim Azeris and Christian Armenians around the autonomous area of Nagorno-Karabakh, which is a predominantly Armenian enclave in Azerbaijan. The conflict erupted in February 1988 and continuously escalated to culminate in bloody clashes between Azeri and Armenians in Baku in January 1990. The weakened Soviet power could not put an end to the war, which soon escalated after the independence of Azerbaijan in August 1991; the state became formally independent in October of that year, just over two months before the Soviet Union disbanded.

The country’s first president after the collapse of the Soviet Union was communist Ayaz Mutalibov (born 1938). He was forced to leave his post in March 1992 after major demonstrations. After general elections, the Democratic-oriented leader of the People’s Front, the democratically oriented Abulfaz Eltjibej (1938-2000) was instead elected. However, his position was weakened by internal contradictions about how the war on Karabach would be conducted. During a military coup, Armenia occupied a large territory outside Karabakh, while the Talishan-populated area of southern Azerbaijan proclaimed a short-term independence. Since Eltjibej was forced to flee in 1993, Gejdar Alijev was elected leader of the Soviet Azerbaijan in 1969-82.

After his death in 2003, Gejdar Alijev was succeeded in the presidential post by his son Ilham Alijev (born 1961), who, through various changes in the constitution, propelled the country towards autocracy. After the constitution’s statute that a president may sit for a maximum of two terms of office was voted off in 2009, Ilham Alijev was re-elected in 2013 for a third and 2018 for a fourth presidential term. Western observers have been judged democratically deficient in several respects. The domestic opposition has been gradually silenced, while the clan Alijev strengthened its grip on the state apparatus and the economy.

The conflict with Armenia over Nagorno-Karabakhhas continued to characterize the area. Following Russian mediation, in 1994 a ceasefire agreement was concluded between Azerbaijan, Armenia and the Armenian-dominated regime in Nagorno-Karabakh, but this could not be turned into any peace agreement. In the same year, the Organization for Cooperation and Security in Europe (OSCE) established the so-called Minsk Group, which, under the chairmanship of the United States, the Russian Federation and France, tries to negotiate terms that would allow a peace conference. Sweden is part of the group’s permanent members, which in addition to Azerbaijan and Armenia also include Belarus, Germany, Italy, Finland and Turkey. Neither has the Minsk group succeeded in making any decisive breakthroughs in the locked positions. The clashes have continued and an escalation in April 2016 resulted in the deaths of dozens of soldiers on both sides.

When Armenia received a new Prime Minister in Nikol Pashinian (born 1975) in the spring of 2018, a series of high-level meetings between the parties began and the situation seemed to be brightening. However, by 2020, no concrete progress had been noted and Nagorno-Karabach was still considered a frozen conflict. About one-seventh of Azerbaijan’s territory was controlled by forces other than the Baku government, and about 15 percent of the Azerbaijani population was made up of internally displaced people forced to leave their homes in Nagorno-Karabakh and the surrounding area.

For decades, even the legal status of the Caspian Sea had been the subject of diplomatic negotiations when it succeeded in reaching an agreement in 2018 aimed at regulating the distribution of fishing water and the seabed between the coastal states of Azerbaijan, the Russian Federation, Iran, Kazakhstan and Turkmenistan. It was established that no one but the beach states may have a military presence in the sea, but by 2020 had not yet reached agreement on the distribution of certain gas and oil fields between Azerbaijan, Iran and Turkmenistan. In the Caspian Sea there are large deposits of oil and gas; the ocean also constitutes habitat for starfish that produce sought after rum.