In July, 500 North American citizens residing in Bahrain had to be evacuated for fear of terrorist attacks. The Pentagon had to conduct a “temporary withdrawal” of military personnel that was not strictly necessary. There were hundreds of North American warships in the Bahrain Bay south of the island. To see more information other than history, please visit Abbreviationfinder to learn more about climate, population, government, and economy for the country of Bahrain.

In June 2005, 50 protesters were beaten and arrested in Manama as police unleashed a demonstration against the lack of jobs. Among the injured were Abdulhadi al-Khawaja, the director of the Bahrain Human Rights Center, which had been closed by the government the year before. Acc. the Minister of Interior responded to the police only after being attacked by the protesters. Those arrested were quickly released. 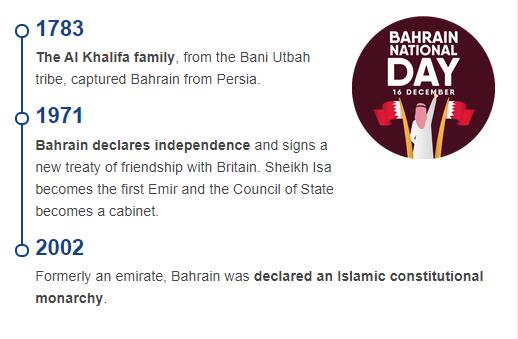 For the first time in the country’s history, a Shiite, Jawad bin Salem al-Oraied, was elected Deputy Prime Minister after the November 2006 parliamentary elections.

A Bahraini citizen of Saudi origin who had been jailed for 5 years in the US concentration camp in Guantanamo, along with 15 Saudis, was released in July 2007. The US authorities said the prisoner had attempted suicide 10 times.

In 2008, the country was the world’s fastest growing financial center – thanks to the regional economic boom. However, the future does not draw light as oil resources are on their way to escaping without the country having been able to create new employment opportunities.

Thirteen people were arrested in December 2008 and charged with planning to overthrow the government and royal house. They were subsequently shown on TV where they “confessed” to their crimes. Together with 22 other accused, they were tried but before being sentenced, they were pardoned in April by a royal decree. They subsequently reported extensive torture: electric shocks, suspended in their arms and beaten, placed in their cells for long periods with their hands and feet bound, and isolation. A total of 178 prisoners – including many political ones – were released by royal decree.

In March 2009, security forces shot and wounded protesters in Sitra and al-Duraz who protested against land expropriation and the release of prisoners imprisoned during demonstrations in 2007 and 08. Amnesty International accused the regime of excessive violence. It apologized that it had only resorted to weapons when the protesters became violent.

The regime continues to be very sensitive to criticism of the royal house and, in 2008, introduced legislation on further tightening of freedom of expression. Many hundreds of Web sites and discussion forums on the Internet were closed in 2009, citing “encouraging violence and sectarian violence”. Several human rights activists and journalists were arrested, accused of criticizing the royal house – including for corruption.

In November 2009, the government established a national human rights institution to “promote awareness of human rights in Bahrain” and draft legislation. However, the regime continues to routinely use torture and does not investigate past torture cases.

In October 2010, parliamentary elections were held in 2 rounds. It was won by the Shia-oriented Wefaq party, which got 18 out of the Lower House’s 40 seats. The election was marked by a host of irregularities, with the regime seeking to impede Wefaq and the country’s Shia majority.

History of Bahrain
Tagged on: Bahrain