The history of Belarus is characterized by changing political alliances due to its central location in Eastern Europe. In the Middle Ages river transport played a major role and made the north-south axis important, from the fifteenth century the areas have been influenced by changing political centers of gravity in the west and east.

Belarus dates from the early Middle Ages in the Kiev Empire, and from the Late Middle Ages in the Union between Poland and Lithuania. By the three divisions of Poland (1772-1795) the Belarusian territories fell to Russia. After the establishment of the Soviet Union in 1922, Belarus was proclaimed the Union Republic. Belarus declared independence on August 25, 1991. To see more information other than history, please visit Abbreviationfinder to learn more about climate, population, government, and economy for the country of Belarus. 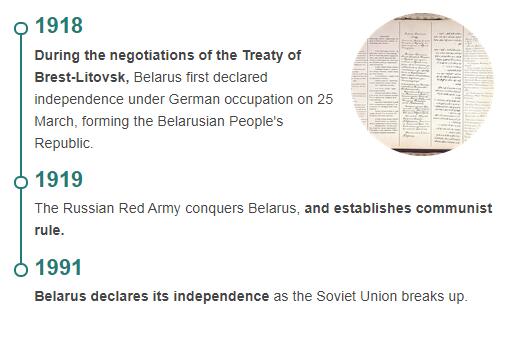 The core area of ​​the earliest Slavic settlements was in all likelihood in the areas around the Pripjat River in what is today the borderland between Belarus and Ukraine. During the Kiev Empire (c. 850–1240), Polatsk (Russian Polotsk) and Turaw (Russian Turov) grew to become the two most important Belarusian principals. The two recognized the Kiev prince’s supremacy, but maintained a high degree of self-government.

In the 13th century, the political center of gravity in the Belarusian territories was moved from Polatsk to Navahradak further west and then to Vilnius. This was due to the fact that, unlike the rest of the Kiev empire, the Belarusian principals at the fall of Kiev did not become taxable to the Mongols, but were incorporated into the Grand Principality of Lithuania. The language of administration was Old Belarusian, a kind of Proto- Belarusian. And while the majority and the majority of the population in the north were Lithuanians (and from Christianity in 1385, Catholics), the people in the south were Slavic-speaking and Orthodox.

In 1385, Lithuania entered into a staff union with Poland. In 1569 it was expanded into a real union, the Polish-Lithuanian Commonwealth. In the double kingdom, Polish culture and language became increasingly dominant. Most landlords in Belarus were Poles, and Jews dominated in the cities. Large parts of the Lithuanian and East Slavic upper classes were polarized, but there was still an East Slavic Orthodox culture in the southeast. In 1517, the Bible was translated into Old Belarusian.

In 1596, the majority of the Orthodox congregations in the Polish-Lithuanian Commonwealth recognized the pope’s supremacy against maintaining his Orthodox liturgy and church practice (Union Council of Brest). This was the prelude to the Unitarian Church, or “The Catholic Church of Eastern Ritual”. Religiously, the population of Belarus was thus divided into three groups: Catholics, the Unitarian and the Orthodox. All Catholics were often considered “Poles” no matter what language they spoke, while the Orthodox were perceived as “Russians”. Only the unreached stood out from the two dominant neighboring cultures.

However, it is not possible to talk about some Belarusian national identity until the end of the 19th century. Even then, much of Belarus’s peasant population referred to itself only as “tutejsjie”, that is, “we who are from here”.

By the three divisions of Poland (1772-1795) the Belarusian territories fell to Russia. Following the Polish uprising in 1830–1831, the eastern parts of Belarus around the cities of Vitsebsk (Russian Vitebsk) and Mahiljow (Russian Mogilev) were converted into regular Russian governors. The rest was part of the North West Province. In 1839, the United Church was placed under the Russian Orthodox Church.

In Tsar Russia, Belarusian was considered a Russian dialect, not a native language. Nevertheless, it gradually developed a Belarusian national culture. The University of Vilnius has developed into a center for both Polish and Lithuanian and Belarusian nationalism. Some of the Belarusians participated in the Polish uprising in 1863, including the rebel hero Kastus Kalinowski (Russian Konstantin Kalinovsky).

Since the Middle Ages, the Belarussian region had had a significant influx of Jewish population. Around 1900, Jews made up almost 15 percent of the population in the Northwest Province. In the next few years, however, several serious cases of Jewish persecution (pogroms) occurred, and many Jews therefore chose to emigrate.

After the Russian Revolution in 1917 and the Brest-Litovsk Agreement after World War I in 1918, Belarus was occupied by German forces. In parallel, in March 1918, an all-Belarusian congress proclaimed a very short-lived Belarusian people’s republic. Already in the fall of 1918, Moscow prisoners took over Bolsheviks. These were created in 1919 the Belarusian Soviet Republic (BSSR).

During the Polish-Soviet war in 1920–1921, Belarus was again a scene of war. At the Riga peace in March 1921, the Belarusian territories were divided between Poland and the Soviet Union. For a few hectic months, the Belarusian territories became part of various state formation. The eastern part became associated with Socialist Russia and upon the establishment of the Soviet Union in 1922, Belarus was proclaimed a Union Republic with Minsk as its capital. In 1924 and 1926, the territory of the Republic was greatly expanded with areas around the cities of Vitsebsk, Mahiljow and Homel.

For the first time, the cultural policy of the Belarusian Union Republic was characterized by “Belarusification”. The Bolsheviks stood weak and allied with the nationally oriented Belarusian elite. At the beginning of the 1930s, however, Moscow switched to a Russification policy that would last for the rest of the Soviet period. During the Stalin era terror, the Belarusian elite was severely affected, and hundreds of thousands of Belarusian peasants were also killed. In the Belarusian areas of Poland conditions were better, but also there all the signs of Belarusian political assertion were suppressed.

Three weeks after the signing of the Molotov – Ribbentrop Pact in August 1939, the Soviet Union occupied eastern Poland. Part of the occupied areas was added to the Belarusian Union Republic. Following the German attack on the Soviet Union, the Belarusian area was again occupied by German forces. However, Soviet partisan divisions continued to be very active throughout the occupation. As a result of the front passing back and forth through Belarus, it was one of the areas of the Soviet Union that suffered the greatest destruction. Hundreds of cities were destroyed, economic life ruined and about a third of the population killed (estimates range from 2.2 to 3 million by a pre-war population of 9.2 million).

Although Belarus continued to have the status of a Union Republic after World War II, Belarus (together with Ukraine) became a member of the United Nations as part of the Great Power Game. In the post-war years, the Soviet authorities began a major reconstruction work. Cities grew, and the rate of urbanization rose very rapidly. In the 1960s and 1970s, the Belarusian Republic had higher economic growth rates than the Soviet Union average. While the Belarussian economy had traditionally been agricultural-based, a considerable industry was also emerging.

While there were active dissident movements in several of Belarus’s neighboring states during the 1970s and 1980s, there was little or no evidence of opposition to the Soviet regime in Belarus. This has been seen in the context of the steadily rising standard of living in the republic providing little ground for social dissatisfaction. At the same time, the Russification also came into play. The Belarussian intelligentsia mainly had technical education, was Russian-speaking and not much concerned with cultural and national issues. Ethnic Belarusians made up about 80 percent of the republic’s total population, but were disproportionately poorly represented in the party apparatus in Minsk, where the Russian influence was strong.

During the perestroika, the democracy movement in Belarus started later than in neighboring republics. The popular opposition to the Soviet power in Belarus was essentially based on three pillars: resistance to linguistic Russification, the discovery of mass graves in Kuropaty outside Minsk with victims of the Stalin era’s riots and the consequences of the Chernobyl accident in April 1986 (about 70 percent of the radioactive emission from Chernobyl fell into Belarusian territory).

In 1989, the Belarusian People’s Front (BNF) was founded under the leadership of Zianon Paznjak (Russian Zenon Poznjak). In the partially free elections to the Belarusian Supreme Soviet in the spring of 1990, BNF got enough sympathizers to have their candidate, the reform-friendly moderate nationalist Stanislaw Shushchevich (Russian Stanislav Shushchevich) elected as Vice-President. That summer, a Belarusian “declaration of sovereignty” was adopted, which made Belarusian “state language” and stated that Belarus should be alliance-free and nuclear-free.

Following the unsuccessful coup in Moscow 19-21. August 1991 Belarus declared itself independent on 25 August. Shushchevich was elected new President of Parliament and thus also head of state. In December, together with Boris Yeltsin and Leonid Kravchuk, he signed an agreement on the establishment of the Commonwealth of Independent States (SUS). This meant the formal death knell for the Soviet Union.

History of Belarus
Tagged on: Belarus