Finds of stone implements are already known from older Paleolithic, and from the Middle Paleolithic there are several Neanderthal finds along with animal bones. During the younger Paleolithic, Belgium was located in a border area with influences from both the south, north and east.

The hunter cultures were replaced in the 4000s BC. of the agricultural band ceramic culture and later of the likewise Central European Michelsberg culture. The latter group belongs to the Flint mines at Spiennes in the Mons area.

During the older Bronze Age, some immigration is believed to have taken place from England, while other immigrants must have brought with them the Central European urn field culture during the younger Bronze Age. It may not be necessary to explain all cultural changes with the migration of people, but in the very long time perspective, the boundary situation is certainly typical of Belgium; there, during the early days of the historical era, Celts and Germans met, and the area became a Roman border province.

One of the strangest archaeological finds from the time of the migration was made in Belgium: the tomb of King Childerik I in Tournai from the year 481 (see Childeric tomb). 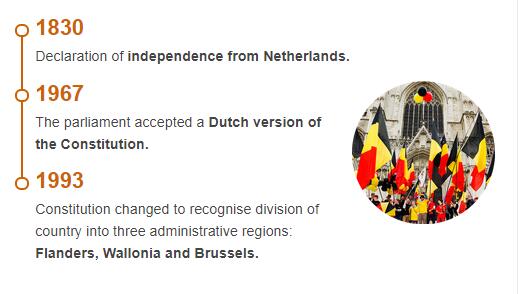 Belgium’s history has been marked by its location in the middle of Europe, surrounded by powerful neighbors of power with aspirations in the economically and strategically important Belgium. At the same time, the country’s position at the dividing line between two language areas has paved the way for strong internal contradictions. These have led to a far-reaching federalization of the Belgian state, while external pressure has decreased in connection with European integration, in which Belgium has played a prominent role.

From Rome to Burgundy

Year 57 BC the area of present-day Belgium was conquered by the Romans. Their land became part of Roman Gaul, gradually becoming a special province, (Gallia) Belgica, which gave its name to the late state. During the upheaval of the population, the original population (Germans and Belgians, ie Celtic tribes) became more and more mixed with immigrant Germans. Politically, Belgium first came into being in the Merovingian Frankish empire and then in the Frankish empire created by Charlemagne.

In 870, the Belgian territories were divided between the East and West Frankish kingdoms, ie. the predecessors to Germany and France respectively. Important for the future was the development of a border between Germanic and Romanian languages. This development was completed around the year 1000, and essentially the border has been fixed ever since and divided Belgium into a French- and Dutch-speaking area.

The language limit did not coincide with the political divide that occurred 870, as the Germanic Flanders was brought to France. In any case, feudalism in Belgium, as in many other parts of Western Europe, came to mean a division into more or less independent entities such as the County of Flanders and the Duchy of Brabant, whose connection to the neighboring major empires was unclear and disputed.

In the Flanders, a very extensive textile industry was developed during the Middle Ages, beginning in the 1000s. Comprehensive exports arose, especially of woolen fabrics, and a well-developed network of trade relations with, among other things. the northern Italian cities.

Textile production and trade laid the foundation for early urbanization. A number of different cities such as Ieper, Bruges, Ghent and eventually Antwerp became major centers of modern Europe. Ieper was the early capital of textile manufacturing and reportedly had up to 200,000 residents in the mid-13th century, but was later overrun by Bruges and Ghent. However, the importance of wool production declined, and from the 15th century Antwerp became the dominant city and a commercial center of European importance.

The citizenship of cities became an influential group, financially as well as politically, and vigorously guarded their interests, partly in connection with battles against rival cities, and partly in relation to feudal rulers. A central problem was the French supremacy claims, which the cities fought with or without the support of the Flanders counties. The problem was complicated by the fact that the textile-producing Belgian cities were heavily linked to England, which supplied the raw materials for wool production. At the same time, there has been a strategically grounded interest in monitoring the political development of the Flanders coastal region from the English side, as this was a natural starting point for an invasion of England.

The contradictions between the Belgian cities and France were expressed in open conflict during periods. The battle of fortune changed, but the Flanders’ victory over a French knight’s army at Kortrijk in 1302 (“the battle of the golden spurs”) has gained a late significance by being part of the mythology of the Flemish national movement.

In 1384 the county of Flanders was united by inheritance with the Duchy of Burgundy in eastern France. The Burgundian dukes gradually incorporated not only the other Belgian areas but also the areas in the north that are part of the present Netherlands. In this way, for the first time in history, a united Netherlands was created, though not without conflict with the citizenship of cities.

History of Belgium
Tagged on: Belgium