Archaeological finds in Belize attest to the presence of man there at least from 9000 BC Excavations have shown village communities along the coast with a maritime adaptation of about 4200. Between about 3300 and 2500 there was a population along the rivers, possibly already by agriculture. During the classical period (250–900 AD), the area was part of the flourishing Mayan culture. 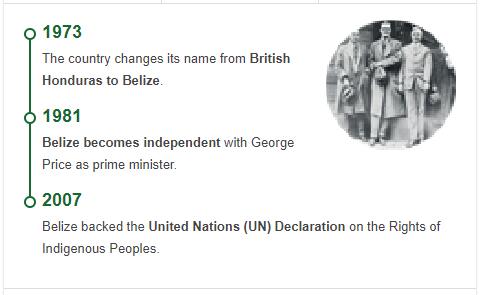 The Spaniards arrived in Belize in the early 16th century. In the 17th century, English pirates and adventurers came to the area, thus initiating a first real colonization. With the help of slaves from Jamaica, the English colonizers began an extensive logging. They first brought out blue wood for dyeing textiles, later most mahogany. The 18th century was marked by conflicts between British and Spaniards over the supremacy of Belize. At the end of the 18th century, the borders were set in favor of the British, and in 1862 Belize became a British crown colony under the name of British Honduras. To see more information other than history, please visit Abbreviationfinder to learn more about climate, population, government, and economy for the country of Belize. Guatemala, which became independent from Spain in 1821, took over the Spanish claims in the area.

The country gained internal autonomy in 1964 and changed its name to Belize in 1973. Guatemala has continued to claim this area and has also threatened invasion. Belize became an independent state in the British Commonwealth in 1981, but it was not until 1991 that the Guatemalan government recognized Belize’s independence. In recent years, Britain’s economic influence in Belize has diminished in favor of the United States.

The country’s economic situation is, in some respects, relatively prosperous. Starting from the second half of the Eighties, the Belize has registered a notable increase of the gross domestic product. The economy is essentially based on the exploitation of the forest, which, spread over a large part of the territory, supplies precious woods, on some export crops and on a rapidly developing tourism (visitors almost doubled during the first half of the nineties), which contributes about one fifth to the formation of GDP (1996). Among the major agricultural products should be mentioned as sugar cane (sugar and molasses accounted in 1996 the 33.6 % of exports), citrus fruits (19.6 %) and bananas (19, 4 %), but there are also other products for domestic consumption and, overall, the agricultural balance (including also fishing) remains consistently positive. The country does not have energy resources and throughout the 1990s exploration for hydrocarbons in the continental shelf of the Gulf of Honduras continued, even if this activity raised many environmental concerns. Industrial activities revolve around the agri-food sector, with plants for the processing of citrus fruits in Dangriga, for the production of sugar in Pembroke Hall, Tower Hill and Libertad, of tannic acid in Corozal and of resin in Mango Creek. For greater diversification of the economy the government established in 1989 an international merchant registry and introduced legislation favorable to offshore financial services in 1990. The opposition has always met her in to recognize its independence from neighboring Guatemala has led this small English-speaking country to allocate 2, 5 % of its GDP on defense (with a heavy burden on the state budget) and to seek economic integration in CARICOM (the Caribbean Community) rather than in the Central American Common Market (the organization that brings together the countries of the isthmus).

History of Belize
Tagged on: Belize