In April 2001, a ship with dozens of children disappeared for a few days, thereby focusing on the slave-like trafficking of children taking place in the country and in the region. The children are sold for work – in many cases on cocoa and coffee plantations in neighboring countries. In order to curb this development, the Ministry of Family Affairs in September introduced an exit certificate for all young people under 15. 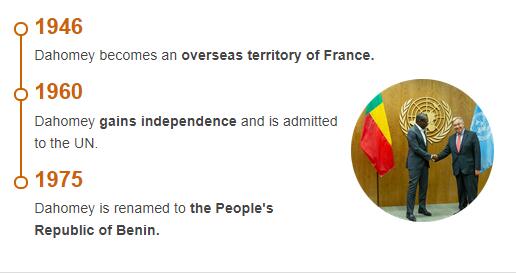 In March 2003, parliamentary elections were held to strengthen President Kérékous in parliament. His supporters got 55.8% of the vote. Parliament started drafting a new family law to strengthen the woman’s position in accordance with traditional customary law. The human rights situation , in comparison with the surrounding countries, is quite good. Political opponents are not subjected to systematic persecution, and there is extensive freedom of press and expression. To see more information other than history, please visit Abbreviationfinder to learn more about climate, population, government, and economy for the country of Benin.

As a result of the spread of the disease AIDS, the average age in Benin has decreased by 10 years.

In October 2003, the Presidents of Nigeria and Benín decided to set up a joint commission in collaboration with UNICEF and Terre des Hommes to work on the repatriation of child slaves. Acc. estimates from the Brigade for the Protection of Minors in Benin, 6,000 Benin children are employed as slave laborers in Nigeria.

During an OAU ministerial meeting in Porto Novo in April 2004, UNICEF published an alarming report demonstrating that trafficking takes place in 53 African countries. The report showed that most victims are children used as soldiers, as slaves or for prostitution. Women were the second largest group. Acc. UNICEF is the most important factor promoting human trafficking, poverty and civil war. It was UNICEF’s hope that the report could help develop funds to combat the phenomenon and to defend children’s rights.

A May 2005 report indicated that the number of children in the country traded annually has reached 50,000. The traffickers often assure parents that their children earn enough money and will send large sums home, and that they will get a good education. The majority are sent to Nigeria, but some are also sent all the way to Europe, where acts as slaves in the home. If the parents get to see their children again, it is only after many years. One way to keep the children in the slave situation is to conduct voodoo ceremonies where they are told that they will die if they break the appointments.

Banker Boni Yayi, who had only recently entered politics, won in the second round of the March 2006 presidential election with 75% of the vote. Thus, the “Kérékou era” was finally over, after Kérékou had been in office for 7 periods and 30 years. Because of his age, the constitution prevented him from running again.

Following the April 2007 parliamentary elections and an unsuccessful attack on the presidential caravan, Yayi gained control of the majority of parliamentary seats.

In 2008, Benin came in 13th among the 48 sub-Saharan countries on the Ibrahim Index of African Governance. Benin performed particularly well in the areas of security, participation and human rights. In 2009, the country entered 15th place. Journalists Without Borders placed it in 53rd place in 2007 (out of 169) on the organization’s Worldwide Press Freedom Index.

While large parts of the world were affected by the economic crisis in 2008, Benin’s economy grew by 5.1% and 5.7% in 2008 and 2009. This was mainly due to growth in the agricultural sector, where cotton continued to play a key role. Cotton accounted for 40% of GDP and 80% of export revenue. However, the country also sought foreign capital in order to build a tourism sector as well as processing agricultural products.

Yayi Boni was re-elected president in March 2011, having already won 53.2% of the vote in the first round. He thus became the first president in the country to get re-elected. His strongest opponent, Adrien Houngbédji, had to settle for 35.7% of the vote. A month later, his party won the FCBE in the parliamentary elections 41 out of 83 seats.

Yayi Boni was elected President of the African Union (AU) in January 2012.

History of Benin
Tagged on: Benin