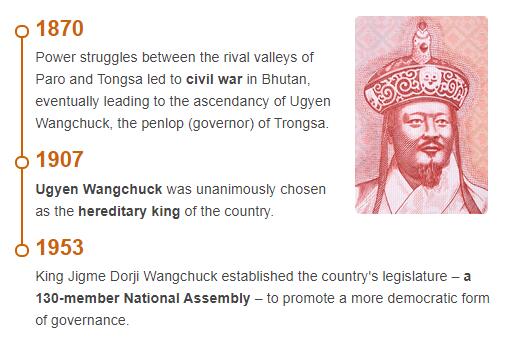 Bhutan’s prehistory is little known, but archaeological finds suggest settlement from about 2000 BC.

In the 7th century AD Buddhism was brought to Bhutan from Tibet. Various Buddhist sects competed for centuries for power. In the 17th century, Bhutan was united by Ngawang Namgyal, and attacks by both Tibetan and Mongol troops were fought back. The country has always been politically independent.

In the 1770s and 1860s, Bhutan was defeated by British troops after subjugating parts of Bengal and Assam respectively. Several treaties were signed with British India, whose control of Bhutan’s foreign policy in 1947 was taken over by India.

By 1907, Bhutan had become a hereditary monarchy under King Ugyen Wangchuk, who centralized power. To see more information other than history, please visit Abbreviationfinder to learn more about climate, population, government, and economy for the country of Bhutan. In the 1950s, Bhutan began to be modernized, and in the 1970s, the country’s isolation was gradually broken. Uncontrolled immigration of labor from Nepal and India caused unrest in the border areas in the early 1990s and a widespread escape of Bhutanese of Nepalese descent. Many years of negotiations for the future of about 100,000 people with unclear citizenship, living in UN-organized refugee camps in Nepal, have achieved limited results.

Since the early 1990s, Bhutan has reluctantly tolerated the use of the country’s armed separatist groups from India. In December 2003, however, the Bhutanese army went on offensive against three Indian guerrilla organizations and expelled them since they refused to obey an ultimatum to voluntarily leave Bhutan within two days.

King Jigme Singye Wangchuk played an important role both in the reform activities and in the preservation of traditional culture. Under his leadership, Bhutan invested significantly more on environmental management efforts than other countries in the region and more than is generally the case among poor countries in need of rapid economic development. Among other things, is environmental knowledge basic subject in schools. The king is attributed to the slogan that great “gross domestic happiness” is more important than a high gross domestic product. However, the preservation of traditional culture has underlined the contradictions between the indigenous population and the residents of predominantly Nepalese birth.

In 1998, the king handed over the executive power to a council of ministers, but retained the role of head of state and commander-in-chief. After presenting a draft constitution in 2005, the first in the country’s history, Jigme Singye Wangchuk abdicated in December 2007 in favor of his son, Crown Prince Jigme Khesar Namgyal, as part of Bhutan’s democratic transformation. General elections for the newly created two-chamber parliament’s upper house were held in December 2007 and for the lower house in March 2008. The royalist Bhutan’s consensus party received 45 of the 47 parliament’s 47 seats and its leader Jigme Yoser Thinley could form government. The new constitution was approved by Parliament’s two chambers in June 2008.

History of Bhutan
Tagged on: Bhutan