To see more information other than history, please visit Abbreviationfinder to learn more about climate, population, government, and economy for the country of Bosnia and Herzegovina. After the fall of the Berlin Wall, the Yugoslav Communist League – in Yugoslavia – decided in 1990 to dissolve the ruling monopoly of power. The local and ethnic demands were put forward by political demagogues. At the November elections in Bosnia – the first with the participation of several parties after World War II – the electoral body voted extensively on «ethnic» candidates. From the nationalist parties, 86 Muslims (SDA), 72 Serbs (SDS) and 44 Croats (HDZ) were elected, while the former Communists of the Democratic Reform Party and the Liberal Technocrats lost ground. 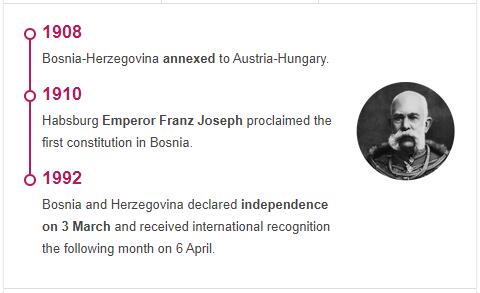 The Muslim population group was represented by the Democratic Action Party and its leader, theologian Alija Izetbegovic, was elected the new president of the republic. The Croatian leaders and the Bosnian Muslims wanted, under the encouragement of Western Europe and for fear of the nationalism underway in Serbia, to copy the example from Slovenia and Croatia and detach from Yugoslavia. The Bosnian Serbs, on the other hand, preferred to remain in a Yugoslav federation.

In October 1991, the Bosnian Sabor adopted a Declaration of Independence, and in January 1992 it was decided to print a referendum on the withdrawal of the federation.

In an effort to preserve the republic and its integrity, President Izetbegovic assured that Bosnia and Herzegovina would not become an Islamic state and guaranteed the rights of all population groups. At the beginning of March, the conflict erupted into light, as independence was supported by 99.4% of Muslims and Croats in a referendum.

The EU and the US recognized respectively. the independence of Bosnia and Herzegovina on April 6 and 7. The Bosnian Republic was admitted as a member of the OSCE, the Conference on Security and Cooperation in Europe, and in May the country was admitted to the UN.

At the same time, the Serbian population proclaimed the establishment of an independent Serbian-Bosnian republic, in the areas under Serbian control: Krajina in Bosnia, with Banja Luka as its center. The fighting spread rapidly throughout the region.

Local Croatian forces also controlled certain areas of the republic and had occasional clashes with government troops. At the end of July, Croatia and Bosnia signed an agreement recognizing each other as republics.

Serbian forces killed in January 1993 Bosnian Deputy Prime Minister Hakija Turaljic in Sarajevo. In March, the UN decreed a ceasefire in the Sarajevo area. At this time of the war, several reports testified about the presence of Serbian concentration camps and an ongoing “ethnic cleansing”. The latter consisted of the displacement of residents of the rival ethnic groups, especially of the numerically weak.

According to Amnesty International, thousands of civilian, wounded and captured soldiers were executed. The prisoners were subjected to torture and ill-treatment. According to UN estimates, around 40,000 women were subjected to rape. Although all the parties involved were abusive, the Serbs remained with the greatest responsibility, while the Muslims were the group exposed to the most serious crimes.

The UN peacekeeping force, UNPROFOR, posted around 20,000 “blue berets” while the United States refused to send troops to Bosnia, despite repeated demands from the UN and European states. Several security zones were established around the cities of Tuzla, Zepa, Gorazde, Bihac and Sarajevo, but neither they, nor the many ceasefire, were to a significant degree respected.

UN interposition forces (United Nations Protection Force, UNPROFOR) were deployed in Sarajevo (under Serbian siege since April 1992) and in other areas of the country since June 1992, while in September of the same year a resolution of the Security Council of the UN banned military flights on the airspace of B. and E .; on May 6, 1993Furthermore, six Muslim cities (Sarajevo, Bihać, Goražde, Srebrenica, Tuzla, Žepa) besieged by the Bosnian Serbs were placed under the protection of UNPROFOR, but overall the action of the UN continued to prove inadequate with respect to the violence of the conflict. Parallel to an ever greater involvement on the part of the United States on the diplomatic level, the international community favored a progressive increase in the role of NATO forces: they were entrusted, in March 1993, the task of enforcing compliance with military flights and from the autumn to intervene against the Bosnian Serb forces to reduce the pressure on the ‘protected cities’. The increased US diplomatic pressure also led to the signing, by the Croatian and Bosnian presidents, Tudjman and Izetbegović, of the Washington agreements, on March 18, 1994, which defined the creation of the Federation of Bosnia and Herzegovina, possibly confederate in Zagreb and comprising about 30 % of the Bosnian territory. With the creation of the new entity, the term musliman “Muslim” (the denomination Muslimani meant, under Titus, the members of the community of the Islamized Slavs) was replaced by bošnjak, in turn different from bosanac, a term that generically designates the citizen of Bosnia. The agreement put an end to the war between the army of Bosnia and Herzegovina and the Croatian troops, which, once again allied, launched a series of victorious offensives against the Bosnian Serbs in the following months. Thus there was a first change in the balance of forces between the warring factions. Furthermore, in July, after the Bosnian Serbs’ rejection of a new peace plan, the Belgrade government (subjected to strong international pressure) imposed an economic embargo on them. The plan, centered on the division of Bosnia between Bosnian Serbs (to whom 49 % of the territory went) and the Federation of Bosnia and Herzegovina (to which 51 was assigned%), had been elaborated, after the failure of the previous peace plans (‘Vance-Owen’ and ‘Stoltenberg-Owen’) by the so-called contact group, promoted by the United States and comprising France, Great Britain, Germany and Russia, and subsequently also Italy (fig. 1).

During the first months of 1995, the fighting intensified throughout the Bosnian territory, particularly in central Bosnia, where offensives by the Croats and Bosnians took place against the Serbs. Subsequently, the Bosnian Serbs also intensified military operations and, taking advantage of a Muslim attempt to free Sarajevo from the siege, in July they attacked the ‘protected areas’. The most tragic attack was launched in Srebrenica, besieged for almost three years, where the massacre planned by General R. Mladić, military leader of the Bosnian Serbs, started at 4. 000 to 11. 000victims. The massacres and ethnic cleansing did not find an end and episodes of extreme gravity, carried out by all the aforementioned parties, took place in Tuzla, Žepa, Bihać, while the market square of Sarajevo became the scene of repeated massacres. In the first days of September, a crushing attack by NATO air forces against the Bosnian Serbs was finally launched. The downsizing of their positions was accompanied by a gradual advancement of the difficult negotiation process and at the end of October the peace negotiations began in Dayton (Ohio, USA). On November 20, Milošević for the Serbs, Tudjman for the Croats and the Bosnian president Izetbegović signed a peace agreement that allowed the cessation of hostilities (fig. 2).