To see more information other than history, please visit Abbreviationfinder to learn more about climate, population, government, and economy for the country of Brunei. 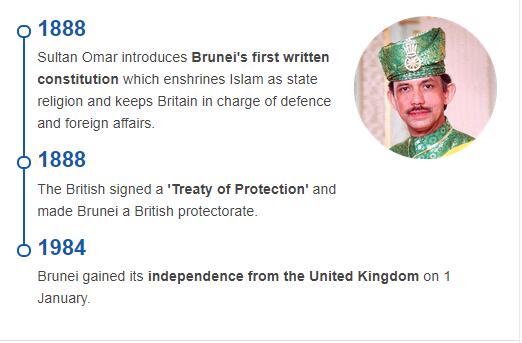 Brunei is an absolute monarchy headed by Sultan Haji Hassanal Bolkiah, in power since 1967. The institution of the monarchy enjoys a religious-cultural legitimacy, supported by the national ideology, Melaju Islam Beraja, which combines language and Malaysian culture, Islamic religion and monarchical institution. The sultan holds all powers: he is at the same time head of state, prime minister, minister of defense and finance, as well as supreme commander of the armed forces.

The stability of the country and the full support given by the population to the sovereign derive from the high economic level and the high standard of living that the sultan manages to guarantee through food subsidies, free medical care, free and free access to education, low pressure tax and low interest rates for civil servants. In 2004, a first democratic opening took place with the establishment of a Legislative Council with minimum powers and of an advisory nature, which was followed, in 2010, by the introduction of the obligation to alternate members of the government every five years.. However, the lack of internal pressure for a true democratic reform of the government system meant that the process of political opening was limited to these decisions. In 2014 the sultan imposed the shari’a, making Brunei the only Southeast Asian country to have adopted Islamic law. The measure sparked protests from human rights associations and boycotts of foreign assets owned by the sultan.

The population of Brunei is mainly of Malaysian ethnicity (66%), but differs from that resident in Malaysia and Indonesia in linguistic and cultural terms. The largest ethnic minority is the Chinese one, which represents 11% of the total population. The modest demographic size makes it necessary to accept the entry of foreign workers, mainly from the United Kingdom, Australia and Southeast Asia. The number of immigrant workers is estimated at 100,000, out of a workforce of 188,000.

The economy suffered only slightly from the global crisis, thanks to high liquidity and low exposure to riskier financial products. Furthermore, according to the International Monetary Fund, Brunei is the fourth richest state in the world by GDP per capita at purchasing power parity, behind Qatar, Luxembourg and Singapore. For this reason, the slight decline in GDP that occurred in 2009 did not produce significant effects. Gas and oil make up about 70% of GDP and make the country the ninth producer of ‘black gold’ in Asia (126,000 barrels per day), as well as one of the world’s largest exporters of liquefied gas, 90% of which is sold to Japan under a long-term agreement. Since hydrocarbon reserves are estimated to last another 25 years for oil and 40 years for gas, Brunei, which depends on exports, aims to attract foreign investment in different industrial sectors. The country is also seeking to transform itself into a financial center for Islamic banks and is focusing on high-tech, thanks to the close relationship with Singapore, the country’s greatest strategic ally, followed by the United Kingdom.

Since joining the Association of Southeast Asian Nations (ASEAN), relations with Indonesia and Malaysia have improved, but the dispute with Kuala Lumpur over the Limbang region remains unresolved, which splits Brunei in two and creates considerable difficulties. also for the traffic generated by the borders, not resolved with the exchange of letters in 2009. Relations with Beijing are instead disturbed by a territorial claim relating to the Spratly Islands, also disputed by Vietnam, Malaysia and the Philippines. But the significant Chinese minority, the importance of tourism, the appointment of a Sino-Bruneian as minister of trade and the signing, in September 2013, of a Memorandum of Understanding between a Brunei firm and a Chinese firm for the construction of an industrial park in the sultanate, contribute to maintaining the link between the two states.

History of Brunei
Tagged on: Brunei