Due to the fall in commodity prices, a sharp increase in marijuana cultivation has been observed in Burkina Faso, as in several countries in the area. The devaluation of the CFA franc led to a reduction in the import of medicines, which has further deteriorated the conditions to combat the two major diseases that are ravaging among the population: malaria and AIDS. In 1988, Burkina Faso had only one doctor per year. 25,000 inhabitants.

The 1998 elections were boycotted by the opposition and therefore gave re-election to the incumbent president. A series of demonstrations led the Ouedraogo government to resign, but the president reinstated most of the ministers in the new government in January 1999. To see more information other than history, please visit Abbreviationfinder to learn more about climate, population, government, and economy for the country of Burkina Faso. 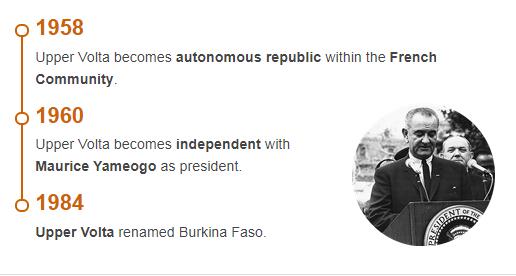 The murder of journalist Norbert Zongo created serious problems for the government, which by an independent investigation was the prime suspect. Zongo had uncovered important information in another murder case in which the chief suspect was the president’s brother. To overcome the crisis, President Compaoré called on the leader and former presidential candidate of the Green Party to join the government, but in December the demonstrations demanding justice for Zongo became more violent. But the government rejected the charges, and in addition refused to investigate the 6 members of the presidential guard who were accused of the murder.

In February 2000, the National Reconciliation Commission requested the rehabilitation of Thomas Sankara, who had been killed in the 1987 coup that brought Compaoré to power. The commission had been formed by the president himself as an attempt to lessen the tensions that had arisen as a result of the lack of results in the Zongo case.

A UN report from March 2000 confirmed that Compaoré was an intermediary for the transport of weapons from Eastern Europe to rebel groups such as UNITA in Angola and the RUF in Sierra Leone, in violation of the international embargo on the transfer of weapons to these rebel groups. This “work” was paid for in diamonds. In December, the government agreed to allow the presence of a UN group to monitor the country’s arms imports. However, Burkina was again mentioned in UN reports in 2003 as a transit country for weapons to Sierra Leone.

A meningitis epidemic in 2001 cost 1500 lives. At the same time, it was estimated that around 10% of the population is HIV positive, making the country one of the most affected.

In 2002, parliamentary elections were held. It was originally scheduled for April 28, but was postponed to May 5 due to the low number of voters who had registered. For the election, 3,540 candidates were running for the 111 seats in Parliament. These were the largest number of political groups that had taken part in elections in Burkina Faso in the country’s history. The opposition had boycotted the parliamentary elections in 1998 and the municipal elections in 2000, but this time chose to participate. The ruling party CDF therefore declined from 101 to 60 seats, while the ADF got 15 and PDP 10. However, the turnout was low and although the opposition is now represented in parliament, it is divided.

For the third time in a row, the country held parliamentary elections in 2002. The election action was originally scheduled for April 28, 2002, but was postponed to May 5 due to the slow voter registration. This time the opposition took part in the election after boycotting the presidential elections in 1998 and the municipal elections in 2000.

In October 2003, police arrested 12 members of the Presidential Guard and the military. They were charged with planning a coup d’état against Compaore. One of the accused, Naon Babou, revealed in his defense details about the murder of Zongo, who compromised the president’s brother. Burkina accused its wealthier neighbor Côte d’Ivoire of funding the coup attempt. The relationship between the two states had been tighter as a result of the civil war Côte d’Ivoire since September 2002 had been thrown in. The country’s president Laurent Gbagbo had accused Compaore of supporting the rebels who had occupied the northern part of the country. As a result of the civil war, 350,000 Burkese emigrants had fled back to their homeland as a result of the persecution of Africans in the northern part of the country.