Burundi’s prehistory is primarily known from stratified settlements such as Nyamunazi and Masango Hill, which link scattered surface finds of stone tools. A large number of hand wedges and splitting tools, as well as small tools that indicate woodworking, from the late acheulé have been found in Nymunazi. These are followed chronologically by double-sided implements from the Magosian and Lupemba cultures, which in turn are followed by the Tshitolian culture and the microlitic Wilton culture from the Late Stone Age.

Signs of early agriculture seem to be linked to iron-using farmer communities within the Ure culture and are dated, through finds such as Mubunga and Rwiyange, to about 600 BC. State founding based on the power of livestock-owning elites who had control of iron technology and ritual activities developed from about 1000 AD. Farmer societies from the 18th and 19th centuries have been studied at an excavation of a mound on the Ruzizi plateau, which has exhibited remnants of animal husbandry, hunting and fishing. 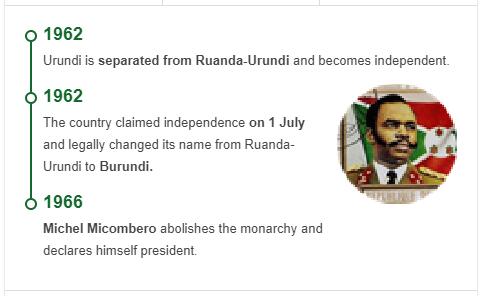 During the 16th century, organized kingship emerged in present-day Burundi. Militarily superior Tutsinomads gained a dominant position vis-à-vis the resident Hutu peasants. Until the 18th century, Tutsi consolidated its position through the Banyiginy dynasty under the leadership of King (mwami) Ntare Rushatsi (c. 1675-1705). Burundi’s ethnic structure, with about 85 percent Hutu, about 14 percent Tutsi and 1 percent Twee, formed the social basis for a well-developed feudal hierarchy. To see more information other than history, please visit Abbreviationfinder to learn more about climate, population, government, and economy for the country of Burundi. A Tutsielite dominated the arable farming hutu, which paid tribute and performed forced labor.

The flowering period of the Banyiginy kingdom fell under King Ntare II Rugaamba (c. 1795–1852). Later, King Mwezi II Kisabo (1852-1908) had to fight against internal divisions. The political independence of the kingdom was broken by the German colonial power, when Burundi in 1899, together with the neighboring state of Rwanda (now Rwanda), was incorporated into German East Africa under the name Rwanda-Urundi. In 1916, the German colony was occupied by Belgium, which after the First World War administered the area as a mandate under the NF. By both Germans and Belgians applying an indirect form of government and supporting King Mwambutsa II(regent 1916–66) the Tutsi elite could maintain their position. The Belgians’ democratization attempt did mean that both the tributary system and the forced labor were abolished, but this also laid the foundation for a protracted and bloody ethnic conflict.

After World War II, Rwanda-Urundi was a UN protectorate. Until Burundi’s independence on July 1, 1962, the country was divided into two political parties: the populist Union pour le progrès national (UPRONA), led by Prince Louis Rwagasore, and the conservative, Belgian-backed Party of Democrats (PDC). Even before independence, Rwagasore was assassinated by PDC agents. Nevertheless, UPRONA gained government power. In 1965, the conflict between Tutsi and Hutu grew, and almost the entire political leadership layer of Hutu was massacred, as were thousands of Hutu peasants. Thereafter, hutu was prevented from taking part in political life.

In July 1966 Prince Charles Ndinzeye (1947-72) resigned his father from the throne, took power as King Ntare and appointed Colonel Michel Micombero as Prime Minister. A few months later, this monarchy abolished and introduced a republic with himself as president. As a result, the country’s most important stabilizing institution disappeared. The following years brought a series of abuses on the Hutu people. The climax occurred in 1972, when an unsuccessful hut coup gave rise to an eerie carnage. Between 100,000 and 200,000 hutu were murdered, and another 200,000 fled the country. Colonel Jean-Baptiste Bagaza seized power in a bloodless coup in November 1976. As Burundi’s strong, Bagaza carried out a series of political and economic reforms, but in the mid-1980s the relationship between the Christian religious institutions and the government deteriorated. The crisis culminated in 1987, when religious schooling was abolished and foreign missionaries expelled. A new coup in September 1987 brought Major Pierre Buyoya to power. Like its predecessor, Buyoya was dependent on the support of the Tutsi elite and was therefore criticized by the Hutu, who demanded political influence. Ethnic conflicts erupted again, and the military, dominated by Tutsi, intervened with violence. In the following massacre in 1988, between 20,000 and 45,000 hutu were killed, while about 60,000 fled to Rwanda.

The bloodbaths in 1972 and 1988 became important water dividers in the Hutu-Tutsi conflict; the first because it led to the crystallization of a collective self-consciousness among the hutu as a martyr society, the latter by it occurred at a time when international society could no longer accept massive violations of human rights.

On the basis of a more democratic constitution, which was adopted in 1992 and, among other things, allowed multi-party systems, presidential elections took place in June 1993, with hutun Melchior Ndadaye defeating Tutsin Pierre Buyoya. Ndadaye led the Front for Democracy in Burundi(FRODEBU), which had quickly become the most important means for Hutu to realize its aspirations. In the parliamentary elections, which were held later in June of the same year, FRODEBU received just over 71 percent of the vote against the former UPRONA’s 21 percent. In October, the Tutsid-dominated military conducted a coup d’état and murdered Ndadaye, after which the coup attempt broke, but when news of the president’s assassination reached the country, militant FRODEBU supporters in collective rage started an ethnic cleansing targeting Tutsis and Huts UPRONA. Over 50,000 people are estimated to have lost their lives in the aftermath of the October Cup. Only after Cyprien Ntaryamira – a moderate FRODEBU politician – resigned in January 1994 was a relative calm restored. Already in April of that year, he perished with the president of Rwanda when their plan was shot down near the airport in Kigali (Rwanda) in an attack that has never been satisfactorily investigated. Immediately after Ntaryamira’s death, Sylvestre Ntibantunganya (FRODEBU) was named interim president.

In the mid-1990s, the contradictions between different factions and extremist groups intensified, and the Tutsid-dominated army conducted ethnic cleansing in the capital Bujumbura. When a takeover of extreme Tutsis seemed imminent, the relatively moderate former President Pierre Buyoya instead carried out a new, bloody military coup in July 1996. The president was ousted and the parliament dissolved. Although the coup was likely to avert a carnage, Burundi was isolated by neighboring countries. By virtue of a revised constitution, FRODEBU was incorporated into the government in 1998, and the opposition approved Buyoya as president. Parliament was reinstated with an increased number of seats to accommodate parties not represented in the 1993 elections.

The UN, the EU and individual countries, including Sweden and neighboring countries Rwanda, Uganda, Tanzania and Congo (Kinshasa), seek to establish a reconciliation process and build up respect for human rights. However, fighting continued, despite the steps taken toward peace, and the army moved more than a quarter of a million civilian Hutus to detention camps to isolate the Hutum militaries. Former President of Tanzania Julius Nyerere was taken on as a mediator but was replaced for health reasons in the fall of 1999 by South Africa’s former President Nelson Mandela. He negotiated quickly and caused the parties, somewhat hastily, to sign a peace agreement in Arusha in Tanzania in August 2000.

The most extreme hate movements, the Force for the Defense of Democracy (FDD) and the National Forces of Liberation(FNL), had been outside the negotiations and did not sign the agreement. Even among radical Tutsis, the commitment to the peace agreement was cool. This meant that new negotiations continued almost immediately, and only in July 2001 was a new peace agreement more firmly anchored. 19 parties, covering almost the entire political scale, now supported an agreement on a three-year transition regime. An element of the agreement was that an international African peacekeeping force be sent to Burundi. However, it was not complete until the autumn of 2003, when 2,700 people from South Africa, Ethiopia and Mozambique had arrived. Hutus received a scarcely majority of the seats in the government, including important posts such as the Interior and Justice Ministers. Pierre Buyoya remained president for a year and a half, after which he was succeeded by his vice president,

In December 2002, the FDD made peace with the government against the promise of government and parliamentary posts and integration of the armed branch into the army. However, the FNL continued the fighting, but weakened significantly. Since the world in January 2004 pledged US $ 1.32 billion for the reconstruction of the country, the African troops were transformed into a UN force and expanded to just over 5,400 men. Despite significant progress, the authorities failed to keep the timetable for the transitional regime agreed. A new constitution on permanent power sharing had to be ratified by Parliament in 2004 without the referendum that would have been held. Promised general elections at all levels were postponed on several occasions following the approval of the neighboring heads of state, who were in charge of the peace process.

A new army was formally formed in early 2005, when former militia soldiers were also trained to police. However, it took until 2009 for FNL to surrender its weapons after several years of continued struggle. A Truth and Reconciliation Commission was appointed to investigate human rights abuses for two years since Burundi’s independence in 1962. On February 28, over 90 percent of participants voted in favor of the new constitution in a referendum. The local and parliamentary elections were conducted in the spring and summer and resulted in major victories for the National Democracy Council for Democracy – Forces for the Democracy Council.(CNDD-FDD), whose leader Pierre Nkurunziza succeeded Ndayizeye as president. The 2010 elections were circumvented by violence, and the opposition boycotted the elections for both Parliament and the presidential post, resulting in superior victories for CNDD-FDD and Nkurunziza, respectively.

According to the constitution, the president can only sit for two terms, which would prevent Nkurunziza from running for the 2015 presidential election. But the president and his supporters claimed that his first five years in office could not be counted in this context because in 2005 he was not elected in the general election. After loud protests from the opposition and the international community, an attempted coup that was defeated and a turbulent and violent time, Nkurunziza was re-elected in July 2015 in an election boycotted by the opposition. The month before, parliamentary elections were held, where the CNDD-FDD obtained a clear majority. The violence, which continued even after the elections, gave rise to a wave of refugees from Burundi who mainly went to neighboring Tanzania.

History of Burundi
Tagged on: Burundi