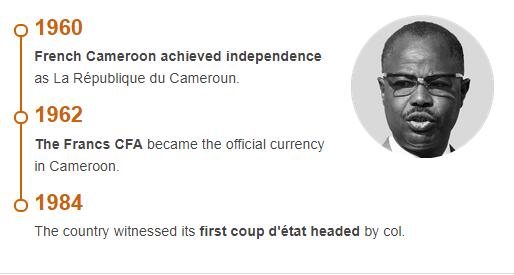 The first residents of Cameroon were probably pygmies, and immigrant Bantu-speaking peoples settled first in the south and later in the west. In the 11th century and again in the 18th century came Muslim fulani, which settled mainly in the north. The Portuguese, who arrived in Cameroon in 1472, established a significant slave trade and plantation operation in the 16th century, and for the next 300 years the Europeans slave trade in the area. Britain tried to take control of Cameroon in battle with Germany, which in 1884 declared Cameroon as a German protectorate. During the First World War, the Germans were driven out of the area by British and French, and in 1919 Cameroon was divided into an eastern, French part and a western, British part; from 1922 both parts were given the position of French and British NF mandate respectively.

In 1948, a group of nationalists in the French Cameroon formed the Union of Cameroonaises (UPC), which demanded reunification and national independence. After trying in vain to gain political influence legally, UPC started a revolt in French Cameroon. To see more information other than history, please visit Abbreviationfinder to learn more about climate, population, government, and economy for the country of Cameroon. Between 10,000 and 20,000 people are believed to have been killed in 1957–62. The UPC was declared legal in 1960, and the movement attracted most other political groups, including leaders such as André-Marie Mbida (1917–80), who had been prime minister in 1957, and his successor, Ahmadou Ahidjo. French Cameroon gained independence on January 1, 1960 with Ahidjo as the country’s first president.

In British Cameroon, the 1955 Cameroon National Democratic Party (KNDP) was formed under the leadership of John Ngu Foncha (1916–99). Its goal was an association with French Cameroon, and the KNDP temporarily allied itself with the far more radical UPC. British Cameroon was politically divided, and the northern part, after a referendum in February 1961, decided to join Nigeria. The southern part was in a Cameroonian federation, which was formed on October 1, 1961 with Ahidjo and Foncha as president and vice-president respectively. In 1966, the Union National Cameroonaise (UNC) was established, and in 1972 the Federation gained a common constitution.

Ahidjo resigned in 1982. New president was Paul Biya, who made it clear that opposition parties would not be allowed. UNC changed its name to the Rassemblement démocratique du peuple camerounais in 1985(RDPC). However, in December 1990, multi-party systems were introduced, and parliamentary elections were announced until March 1992. Parts of the opposition feared an undemocratic election campaign and boycotted the election, and the RDPC achieved close to half of the seats in Parliament. Presidential elections were held in the fall of the same year despite the political turmoil, and Biya was declared the winner. In May 1997, elections to the National Assembly were held. The RDPC received 109 out of 180 seats and the Social Democratic Front 43. Another five parties were elected. In October of that year, Biya was re-elected with close to 93 percent of the vote in a presidential election boycotted by several of the largest parties in protest of the lack of an independent election commission. The opposition’s inability to put forward a joint counter-candidate resulted in Biya being re-elected again in 2004. The RDPC further strengthened its majority in parliament in the 2002 elections.

In the 2007 parliamentary elections, RDPC won big and won 153 seats against SDF’s 16 seats. The opposition accused the government of massive electoral fraud and the Supreme Court ordered re-election in five electoral districts. The election result led to the regime being able to push through a constitutional change so that the president can sit for an unlimited number of terms again, and Biya was very right in the 2011 presidential election. Even before the election results were announced, almost all counter-candidates demanded in vain that the Supreme Court should annul the election. The official result showed that Biya received 78 percent of the vote; second most, SDF candidate John Fru Ndi (born 1941) received 11 percent. Biya was re-elected in 2018 for another seven years as president with 71 percent of the vote.

In 2013, RDPC again won a major election in the National Assembly and received 148 seats against 18 for the SDF. In the same year, elections were held for the first time for the Senate, which was enacted in a constitutional amendment as early as 1996. Out of 70 eligible seats, 56 RDPCs and 14 SDFs came. See also State Condition and Politics.

The merger of French-speaking and English-speaking areas has not been problematic. Separatist forces in the English-speaking parts, where many feel discriminated against, have been periodically active. At the end of 2016, unrest erupted in the western part of the country and in October 2017, symbolic independence was proclaimed for the Northwest Region and the Southwest Region under the name Ambazonia. The government met the separatist movement by force; abuses against the civilian population have been committed on both sides.

In the early 1990s, an old border dispute with Nigeria led to armed clashes on the Bakassi Peninsula on the Gulf of Guinea. Cameroon brought the matter to the International Court of Justice in The Hague, which in October 2002 granted Cameroon the right to the peninsula. The court referred to a settlement in 1913, when the British colonial administration resigned Bakassi to the then German Cameroon. The sea outside Bakassi is rich in fish and is believed to contain large deposits of oil and gas. Since Nigeria refused to accept the verdict, the countries formed a joint commission under the UN leadership to look over the entire common border. In December 2003, Nigeria exited a land area on Lake Chad in the north to Cameroon. In 2006, Nigeria initiated the surrender of the Bakassi Peninsula to Cameroon.

According to Transparency International, Cameroon is one of the world’s most corrupt countries.

History of Cameroon
Tagged on: Cameroon