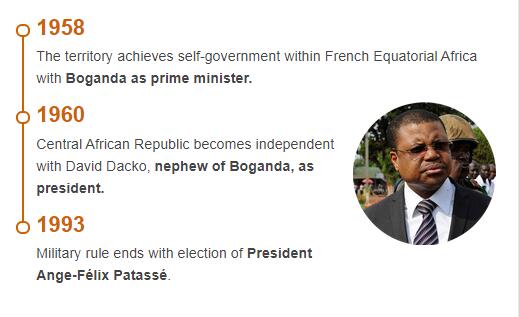 The early prehistory of the Central African Republic is known through scattered finds of postacheulean stone tools from the Lupemba and Sanguan cultures. To see more information other than history, please visit Abbreviationfinder to learn more about climate, population, government, and economy for the country of Central African Republic. The latter are characterized by double-sided logs and are believed to indicate activities related to the forest environment. From the end of the Pleistocene, there are accumulations of quartzite rejections or knife blades similar to those found in the West African Sahel area.

Deposits from Late Stone Age that include microliters of quartz are known from scattered surface finds. Rock carvings have been found in i.e. Bouar area in northwestern Central African Republic. Residual stones are also found and have been investigated in, among other things, Yangofogo in the southwest, at settlements in Betume and Balimbe where they date to about 800-400 BC.

Remains of early farming are few, but some finds have been made, among other things. in Batalimo from about 400 AD Metallurgy can be demonstrated in the first centuries AD At Nana Mode, a larger settlement dates to about 700 AD. and in Ouham Taburo, high altitude settlements have been investigated. From the chronologically later agricultural communities, the finds originate from graves rather than settlements.

From the 16th century until the late 1800s, slave hunting and slave trade from West Africa continued, which greatly decimated the area’s former population. Nearly 50 percent of the Central African Republic’s current population groups, of which banda and baya, originate in settlements from the 19th century. In 1889, the French settled in Bangui, but only around 1910 did they gain full control of the colony, which became a territory of French Equatorial Africa under the name of Oubangui-Chari. France gave trading companies exclusive rights to exploit the area’s raw material resources, such as rubber, timber and minerals. The Sangha-Oubangui Society became notorious for its harsh treatment of the domestic workforce. However, widespread forced labor and poor infrastructure led to local unrest and resistance until 1945.

During the period 1946–58, the Republic of Oubangui-Chari was part of the French Union. In 1946, the system of forced labor was abolished, and all Africans became French citizens with the right to form political parties. Barthélémey Boganda was elected to the French National Assembly. Boganda became head of government in 1959, when the country gained internal autonomy as an autonomous republic within the French Commonwealth; at the same time the name of the Central African Republic was adopted.

Boganda continued the struggle for full autonomy, and after his death in 1959, David Dacko was able to lead the country to independence on August 13, 1960 and became the country’s first president. Dacko introduced a one-party system in 1962. He was overthrown in 1966 by Captain Jean-Bédel Bokassa, who came to lead one of the most brutal and most devastating regimes in Africa. After first being appointed president for life and field marshal, Bokassa proclaimed 1976 Central African Empireand then crowned himself emperor in a ceremony that cost a quarter of the state budget. Bokassa has long enjoyed French support through his personal friendship with French President Valéry Giscard d’Estaing and deliveries of uranium to the French nuclear weapons program. Only after Bokassa’s brutality reached world reputation and he was singled out for personal participation in the murder of hundreds of demonstrating schoolchildren, Dacko in 1979 was able to regain power with the help of French military while Bokassa was abroad.

Dacko re-established the Republic and reintroduced in 1981 multi-party systems. In March of that year, he was elected president with 50 percent of the vote. Dissatisfaction with Dacko’s regime increased rapidly, and in September he was forced to surrender power to General André Kolingba, who repealed the constitution and banned all party politics. According to a constitution adopted in 1986, Kolingba was elected president for six years. During his reign, the economy deteriorated, and the International Monetary Fund (IMF) demanded sharp cuts in the public sector. The cuts, together with a repressive policy, led to repeated riots and strikes. After a confusing period of party and personal competition, a national debate forum culminated in a series of constitutional supplements that, among other things, re-established the multi-party system. In the September 1993 presidential elections, Kolingba lost power to Ange-Félix Patassé, a former Prime Minister during Bokassa. Patassés liberalaMouvement pour la libération du peuple centrafricain (MLPC) became the largest party in parliament, and he succeeded in forming a majority-supported coalition government. A new foundation that gave the president great power was adopted in 1995.

In the mid-1990s, the government was unable to pay wages to the army, the security police and the civil servants. The result was extensive strikes and unrest. Several military revolts in 1996 were fought with the help of French soldiers who came to Patassé’s rescue. However, the French military intervention was met by strong protests from the opposition, and in early 1997 an international African force assumed responsibility for maintaining the order. Following continuing unrest, Patassé and representatives of various political groups succeeded in agreeing on a national reconciliation pact, which included, among other things, parliamentary elections under UN supervision. In connection with the Reconciliation Pact, the African force was replaced by a UN troop called the MINURCA. In the parliamentary elections, the opposition lost a fine majority when one of its members went over to the government side. The exchange stirred upset feelings and helped prevent the presidential election until September, when Patassé was re-elected with just over 51 percent of the vote.

The UN troops were withdrawn from the Central African Republic at the turn of the year 1999-2000, when the situation appeared to have stabilized. However, new unrest soon erupted, partly because the state employees had not been paid for more than two years. At a military coup attempt in May 2001, Patassé was assisted by Libyan soldiers and the rebel movement MLC from Congo (Kinshasa). André Kolingba and 21 other senior officers who were suspected of being behind the coup attempt were sentenced to death in their absence, and hundreds of others received long prison sentences. Commander François Bozizé was dismissed and fled to Chad with several hundred men when he was to be arrested.

In October 2002, the Central African Republic was invaded by forces under Bozizé. The advance was halted in the northern outskirts of the capital Bangui with the help of Libyan soldiers and allies from the MLC, but in practice the country was now divided in the middle. A force from several neighboring countries replaced the Libyans, and Patassé was forced, after international pressure, to send home the MLC soldiers. When Patassé was abroad in March 2003, Bozizé’s troops could take Bangui without resistance. Patassé was forced into exile, Bozizé proclaimed president and set up a broad transitional government. The coup was condemned by the outside world, but the neighboring countries quickly accepted the new regime after it proved to have received considerable popular support and a relatively calm restoration. A Provisional Parliament was set up, and representatives of all parties, trade unions, other peoples movements and ethnic groups conducted a national dialogue. A new constitution that somewhat restricted the power of the president was adopted in a referendum in December 2004. General elections were held in the spring of 2005, and Bozizé was elected president. The national unification movement “Kwa Na Kwa” (The Convergence Nationale “Kwa Na Kwa” (KNK), an alliance of small parties and individuals loyal to Bozizé, won in the parliamentary elections. In the 2011 presidential election, Bozizé received 64 percent of the vote in the first round, a result that was challenged by the opposition but approved by the Constitutional Court. The KNK was again given the most mandate in parliament.

Following Bozizé’s entry, several rebel groups began rebellions in the northern parts of the country. One of these groups, UFDR, helped Bozizé to power but later became dissatisfied with him. Others were believed to be supporters of Patassé. The conflict in Darfur in Sudan and unrest in Chad also have a bearing on the violence in the North Central African Republic. Since the Ugandan rebel movement’s Lord’s Liberation Army (LRA) was expelled from Uganda in 2008, parts of its forces reportedly established a base in the Central African Republic. Several peace agreements were signed and Bozizé offered some rebel groups posts in the government but no lasting peace was ever achieved. Several criminal gangs further aggravated the security situation.

From the end of 2012, Bozizé’s position weakened sharply and in March 2013, the rebel group Séléka Bangui took over, and Bozizé fled abroad. The rebel leader Michel Djotodia proclaimed president, repealed the constitution and replaced Parliament with a national transitional council, which in August of the same year formally appointed Djotodia as president. Despite Djotodia’s decision to dissolve Séléka, the violence continued in the country. Former Séléka members attacked the civilian population, who in turn responded by forming militias called anti-balaka(‘anti-machete’). The conflict has sharpened the contradictions between Muslims, associated with Séléka, and Christians. The situation was estimated to be acute at the end of 2013, with up to 1 million people on the run and about half the population dependent on emergency aid. Pressed by, among others, the Central African Cooperation Organization ECCAS, Djotodia resigned in January 2014 and Bangui Mayor Catherine Samba-Panza was appointed by the National Transitional Council as interim president.

A new constitution was approved in a referendum in 2015, which was followed by parliamentary and presidential elections in late 2015 and the first half of 2016. Former Prime Minister Faustin-Archange Touadéra was elected new Prime Minister. Like the new president, 60 of the 140 MEPs stood as independent candidates.