Chad was created through French colonial politics around 1900 and encompasses areas of different cultures and history. In the north, the Saharan mountain quest is inhabited by nomad and oasis people (teda). In the Sahel belt south of the desert, with a very mixed population (immigrant Arabs and others), early Islamized kingdoms have flourished for more than a millennium: in the regions around Lake Chad the great kingdom of Kanem – Bornu (see also Bornu), southeast of the lake Kingdom of Bagirmi (see bagirmi), in the border areas against the Sudan Sultanate Wadai. The economic backbone of these kingdoms was the trade, mainly with slaves, through the Sahara to North Africa. The slaves were taken from Chad’s southernmost and most fertile region, inhabited by Sudanese people (mainly sara) organized in village communities. 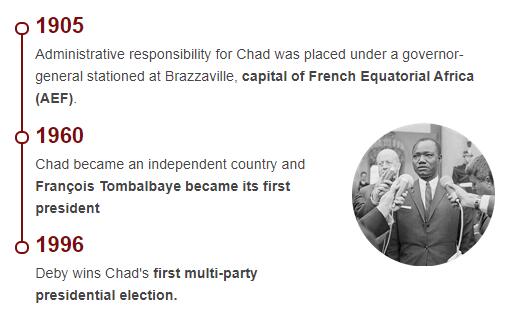 In 1898, French troops reached the area from the south. To see more information other than history, please visit Abbreviationfinder to learn more about climate, population, government, and economy for the country of Chad. The entire current Chad was placed under French military administration and was included in French Equatorial Africa in 1910–58. The occupation met hard resistance in the north. In the south, however, the French were received as liberators from the oppression and slave expeditions of the Muslims. There, too, the colonial power made its main efforts in education and economic development, the latter by forcing the population to grow cotton. Only after World War I did Chad get a civil administration.

During the decolonization phase after 1945, political parties were formed in Chad, of which the strongest became Parti progressiste Chadien (PPT), based mainly on the southern region’s cotton growers. Party leader François Tombalbaye became Chad’s first president after the country gained full independence in 1960, and soon became the dictator of a one-party state. In the north, however, an armed resistance movement was organized, the Front de la Libération Nationale du Chad(Frolinat), in which however strong conflicts ruled. In 1975, Tombalbaye was killed in a military coup. Nor could the subsequent regime hold the country together. Frolinat took control of large areas in the north with Libyan help, but was stopped by French troops on advancing south towards the capital N’Djamena.

After the president was ousted after fighting with other insurgent forces led by former Frolinat leader Hissène Habré, attempts were made with a unifying government with Frolinat leader Goukouni Oueddei as president. Despite a Libyan intervention on Oueddei’s side, he was overthrown by Habré in June 1982. During most of the 1980s, battles continued between Habré’s army, which received military support from France, and Oueddei’s Libyan-backed militia. While weakening Oueddei’s political base, former Commander-in-Chief Idriss Déby built up a new resistance movement in Sudan. In November 1990, Déby’s troops invaded Chad and quickly entered the capital. Habré was on the run, and both France and Libya and Sudan immediately pledged their support to new President Déby.

While troops loyal to Habré continued to engage in military resistance, Déby made peace with several armed opposition movements and convened a national conference, which in 1993 wrote a new, provisional constitution and appointed a transitional parliament. In connection with the democratization process, in December 1994 amnesty was issued for political prisoners and refugee refugees with the exception of Habré. A permanent constitution was adopted in a referendum in March 1996, despite opposition from the political groups in southern Chad, which had advocated a federal system instead of the unified state now proclaimed.

Under the new constitution, Idriss Déby won by a large margin in the presidential elections in 1996 and 2001, but in 1996, however, only in a second round of elections. Following a constitutional amendment in 2005, the president is allowed to sit for an unlimited number of terms, and Déby was re-elected in 2006 and 2011 with 65 and 89 percent of the votes respectively. His party Mouvement patriotique du Salut (MPS) received an absolute majority in the National Assembly both in 1997 and in the one year late elections in 2002. Thereafter no parliamentary elections were held until 2011, when the MPS-led coalition Alliance pour la renaissance du Chad (ART) received 125 of 188 mandate. The 2015 parliamentary elections are held in the future. The following year, Déby was re-elected, this time with 60 percent of the vote.

Although some stability has been achieved, armed riots have also characterized Déby’s regime with rebel groups in both the north and east as well as the south. Since the turn of the millennium, it has been mainly troubled in the eastern parts towards the border with Sudan. The situation has become even more complicated due to the conflict in the Sudanese region of Darfur, which erupted on a large scale in 2003. In addition to the hundreds of thousands of refugees who have traveled across the border to Chad often live in difficult conditions, the Sudanese Janjawid militia has carried out raids against the refugee camps. Chad and Sudan have accused each other of harboring rebels from neighboring countries on their territory. There have also been regular battles between Chadian soldiers and Sudanese militia, and Chad has entered Sudan to fight rebel forces. The UN and several aid organizations have repeatedly been forced to suspend their aid efforts in eastern Chad. During the 00s, Sudan and Chad signed several non-infringement agreements, but these were not respected.

In 2008, the capital N’Djamena was seized by rebel forces that have been bouncing off bases in Sudan to overthrow the regime, but the rebels withdrew without being able to occupy the presidential palace. In the same year, the EU sent a peacekeeping force to Chad and the following year a UN force, called MINURCAT, took over responsibility for the peace mission for Chad and the Central African Republic that the EU had hitherto led. However, the force was withdrawn in 2010. This year, Chad’s relationship with Sudan appeared to be seriously improving. The most important rebel organization, the Union des forces de la resistance (UFR), was offered amnesty, but some factions refused to lay down their weapons and instead applied to the Central African Republic. The uneasy situation in this neighboring country has also led to extensive refugee flows to Chad.

Chad was hit by drought several times during the 1990s, but also by heavy downpours with flooding as a result, which has led to food shortages in several parts of the country.

Former President Hissène Habré left after his departure in exile in Senegal, from where he was requested to be extradited to be held accountable for human rights violations. He was accused of being responsible for the deaths of some 40,000 people and a few hundred thousand cases of torture. After several unsuccessful attempts to bring him to trial, Senegal reached an agreement with the African Union (AU) to set up a special court for the purpose. Habré was arrested in 2013 and sentenced to life imprisonment in 2016.

A multi-year border dispute with Libya over the Aozou region of northern Chad was decided in February 1994 by the International Court of Justice in The Hague in favor of Chad. Libyan troops occupied Aozou as early as 1973. In 1998, Chad sent at least 1,000 troops to Congo (Kinshasa) to help President Laurent Kabila’s government troops against rebels. After severe defeat, the forces withdrew.

In 2015, at a AU meeting, it was decided that Chad, together with Nigeria, Benin, Cameroon and Niger, would contribute to a military force with the task of fighting the Nigerian militant Islamist movement Boko Haram.

History of Chad
Tagged on: Chad