Before the Spanish colonization, Costa Rica was sparsely populated. Kristoffer Columbus arrived on the coast on his last voyage in 1502, giving the country the name that alluded to the hope of great wealth (“the rich coast”).

Nevertheless, the Spanish interest in Costa Rica was small. The country avoided the characteristic large estates, with smaller units being run as farms without using the indigenous people as slaves. Nevertheless, the Indians were quickly displaced to marginal parts of the country. 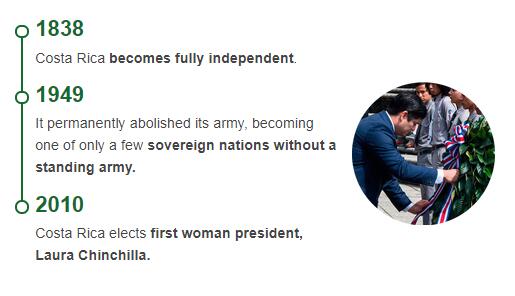 Along with the other Central American colonies, Costa Rica became independent in 1821 and formed part of the Central American Federal Republic until 1838. To see more information other than history, please visit Abbreviationfinder to learn more about climate, population, government, and economy for the country of Costa Rica. At that time, the country became its own republic, consisting largely of independent small farmers. Coffee evolved to become the country’s most important economic foundation as early as the mid-1800s.

In 1871, US railroad engineer Minor Keith signed a contract with the government of Costa Rica for the construction of a railway line that would connect the Pacific coast with the Caribbean via the capital San José. The workforce was largely sourced from Jamaica, and workers later found employment in Keith’s banana plantations, which he built along the railroad line in the tropical lowlands off the Caribbean coast. This was the beginning of the United Fruit Company and Costa Rica soon became the world’s largest banana supplier.

The banana plantations were economic enclaves run directly by United Fruit, while coffee production was the mainstay of the national aristocracy in the central parts of the country. In 1913, bananas and coffee accounted for about 85% of the country’s export revenue.

Compared to the other Central American republics, Costa Rica has evolved into a dynamic society. Since 1889, the land of negligible disruption has been ruled under a democratic constitution. General voting rights were introduced in 1913, although the black population of the banana slave was not considered full citizens and did not even have permission to leave the province of Limón. Education and health care were given priority over the military. The workers achieved much more through trade unionization than was usual in neighboring countries, and in 1921 they were introduced to the 8-hour day.

The economic crisis of the 1930s was a disaster for coffee exports and came at the same time that banana diseases destroyed the plantations, which were left for a while by the companies. The Communist Party was established in 1929, and together with the more moderate Socialist Party supported the unions that were not approved by United Fruit until 1940.

President León Cortes (1936–40) represented the reactionary part of the bourgeoisie and countered the labor movement. Cortes was influenced by fascist ideas and was an important support for the German immigrants, who were among the largest coffee producers. His successor Rafael Ángel Calderón created the National Republican Party (PRN) in 1940. He was supported by the communists and trade unions and introduced new social reforms. The PRN won the election in 1944 as well, and President Picado faced increasing difficulties with the opposition criticizing his cooperation with the Communists. The 1948 election was won by the opposition, but Picado canceled the election, and a six-week civil war broke out.

José Figueres (“Don Pepe”) mobilized a national liberation army and forced the army to surrender. A new constitution was drawn up where the most remarkable was the total abolition of the army. Furthermore, women gained voting rights, banks and large parts of the industry were nationalized, the colored population was given full status as citizens and the social sector was given priority. The army was replaced by the Civil Guard, a paramilitary police force.

Figueres gained tremendous popularity, and his social-democratic party PLN has led the country through many periods in what must be termed one of Latin America’s most well-organized political systems. But the economic dependence on the United States, which had to supplement the weak export of coffee and bananas, eventually made it difficult to maintain the standard of living to which the Costa Ricans became accustomed. Due to the country’s stability and pleasant climate, many Europeans and North Americans have immigrated to Costa Rica.

Costa Rica became involved in the conflicts in neighboring Nicaragua in the 1970s and 1980s. Relations between the two countries have never been good, and in their fight against the Somoza dictatorship, the Sandinists had important support in Costa Rica. Costa Rica has long been a haven for exile groups from all over Latin America, and when the refugees from Somoza’s Nicaragua returned home, they made room for disgruntled Nicaraguan people who saw no benefit in the revolution.

President Luis Alberto Monge (1982–86) was given a difficult task as the United States set tough conditions for Costa Rica’s debt and at the same time expected the country to play a military role in trying to weaken the Sandinist government in Nicaragua. The Costa Ricans are proud not to have a military tradition, and in November 1983, Monge declared the country neutral in the conflict. Nevertheless, the United States put pressure on Costa Rica to accept a gradual upgrading.

Oscar Arias (PLN) elected in 1986 openly criticized the United States’ unwillingness to respect Costa Rica’s neutrality and laid very concrete obstacles in the way of further militarization of the country. Arias initiated the Central American Peace Plan for which he received the Nobel Peace Prize in 1987.

Arias turned out to be a skilled foreign politician, but he neglected domestic politics. This was characterized by dramatic restructuring following the instructions of the International Monetary Fund (IMF), which meant strong reductions in the welfare state that the Costa Ricans had reason to be proud of. So it was no big surprise that the Christian Democratic Opposition Party (PUSC) won the 1990 election with Rafael Ángel Calderón as president.

Calderón sought to improve its predecessor’s poor relationship with the United States, but also had to defend further austerity to qualify for new IMF credits. Calderón initiated a comprehensive privatization process of key state-owned enterprises and set itself the goal of reducing the state sector by 25,000 employees. Costa Rica then had one of the world’s highest rates of foreign debt per capita. When the conflicts in Nicaragua, El Salvador and Panama resolved in the early 1990s, Costa Rica was able to concentrate more on its own economic policies rather than the diplomatic role the country had played throughout the 1980s.

The election of José María Figueres (PLN) as president in February 1994 led one son of one famous president to follow another (Calderón and Figueres). Figueres placed great emphasis on economic stability with an approach to the NAFTA countries and on a common environmental policy in Central America. His political profile was significantly stronger social democratic than his predecessors from the PLN. In May 1995, Figueres survived a dramatic plane crash.

Miguel Ángel Rodríguez of the Christian Socialist Party PUSC (Partido Unidad Socialcristiana) won the 1998 presidential election. The political distance between Puscas and PLN have become increasingly mindre.Etter a period marked by corruption scandals and weakened economy gave the 2006 election, a narrow victory to plns Óscar Arias, who was also president from 1986 to 1990.

In the latter part of the 1990s, Costa Rica had a solid economic recovery, with growth as high as 8% and sharply reduced inflation. The plans for a large-scale privatization of telecommunications and electricity companies met with strong resistance and had to be put on ice. However, the country succeeded in attracting foreign investors. Computer technology and especially tourism made Costa Rica less dependent on traditional coffee and banana export goods, but falling coffee prices caused a new stagnation in the early 2000s.

Costa Rica joined the Central American Free Trade Organization CAFTA in 2007, as the sixth and final country and also the only strong opposition that needed a referendum. 52% said yes to what President Arias had launched as a key measure for new growth in the economy. The tourism initiative was focused on so-called ecotourism; around 25% of the country’s area has the status of a national park or nature reserve. In 2007, Costa Rica also declared itself the first voluntary CO 2 neutral nation. The years of growth have provided the basis for a fairly comprehensive welfare policy, poverty has been reduced and crime is low – but Costa Rica is no longer a special class in Central America.

Luis Guillermo Solís, who was elected to the 2014 presidential election, believes neoliberalism has contributed to huge income gaps in Costa Rica. The plan is to ease the country’s budget deficit through stricter enforcement of taxes.