From the Middle Paleolithic period (moustérien), several cave dwellings have been found; Late Paleolithic and especially Mesolithic, however, are poorly known. By the middle of the sixth millennium BC eastern Croatia was reached by neolithic development (cf. Starčevo), in the coastal country, however, first represented by a western Mediterranean stamp pottery. During the Late Politics and the copper age, a certain level of cultural equalization took place. The older Bronze Age is partly poorly known, but the younger has left a rather rich material. The similarities with neighboring parts of the Balkan Peninsula are large. During the Iron Age, several population groups can be distinguished. Historical sources make it possible to identify most of these with Illyrian tribes. Especially in the mountainous regions of Croatia there are large iron age burial fields and several ancient castles.

The coastal land was partially characterized in the 500s BC. by Greek colonization (among others by Korčula). From the Late Age (500 BC – BC), secure Celtic population elements can only be located in the area between the Sava and Drava rivers. The coastal area came to belong to Rome as early as the 20th century BC. (compare Illyricum), while the hinterland was first conquered during the ancient empire (compare Dalmatia). From the time of the migration, a number of Hunian and Germanic tomb finds are known. The Slavs are thought to have reached Croatia from the north and the northeast: the oldest archaeological sites for South Slavic immigration date back to the 500s. However, the Romanized population continued to play an important role in the coastal land. 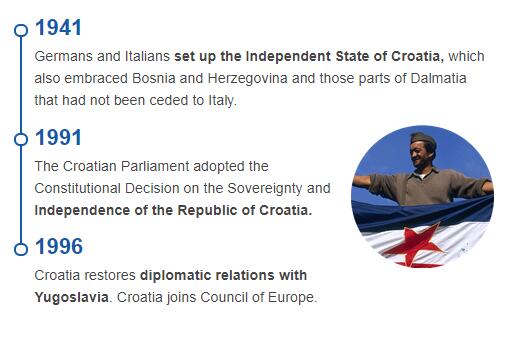 In the late 500s, the area was conquered by Slavic people. The Croats were Christianized in the 700s and 800s by the Catholic Church, but used their Slavic language in liturgy. To see more information other than history, please visit Abbreviationfinder to learn more about climate, population, government, and economy for the country of Croatia.

Around 800, two Croatian principalities existed, Dalmatian Croatia on the coast and Pannonian Croatia inland; both became vassal empires during the Carolingians, but the princes of Dalmatia soon regained their independence. One of these, Trpimir I (c. 845–864) became the ancestor of most later Croatian rulers (the Trpimirović dynasty). Tomislav I, who was crowned Croatia’s first king about 924, joined Pannonish Croatia to his dominion and also controlled parts of Bosnia. After the death of the Trpimirović dynasty, László I of Hungary began to expand in Croatia in 1091, which was continued by his successor Kálmán. In 1097, the last king of Croatia, Petar Svačić, fell. In 1102, Croatia was united in personnel union with Hungary (Pacta Conventa)) and was finally conquered about 1105. Croatia was part of the personnel union with Hungary until 1918. The King of Hungary was represented in Croatia by a governor, Ban, but Croatia had its own parliament, Sabor, where the nobility and the leaders of the church were represented. After 1202, Hungary lost much of Dalmatia to the Republic of Venice.

Much of Croatia was conquered after 1450 by the Turkish Ottoman Empire, which defeated Hungary in 1526. In 1527, the Croats elected Ferdinand I of Habsburg as king. Large parts of what was reduced by Turkish conquests, Croatia, from 1578, were included in the so-called “directly controlled” military border from Vienna. To this, during the 16th and 16th centuries, Serbs moved from the Ottoman Empire to serve in the Habsburg army; in exchange, the emperor respected their religion and social organization. In the peace of Karlowitz (Sremski Karlovci) in 1699, the Habsburg Empire recovered part of Croatia from the Ottoman Empire.

Dalmatia and the part of Croatia that was not conquered by the Turks experienced the Renaissance, Reformation and Counter-Reformation, as did other Catholic parts of the Habsburg Empire. In 1780, German was introduced as a management language in the Habsburg countries, and in 1790 Hungary introduced Hungarian into its territories. The Croats had to keep Latin for a while. From 1809 to 13, parts of present-day Croatia, together with parts of Slovenia, were part of Napoleon’s lyrical provinces with Slavic administrative language.

In the mid-1830s, Croatian intellectuals created a Croatian national language as a counterbalance to Hungary’s magyarization efforts. At the same time, Croatia’s nobles were dissatisfied with Hungary’s economic policy. In 1848, Josip Jelačić as newly appointed ban declared Croatia’s independence from Hungary. Croatia supported Austria’s struggle against Hungary’s uprising in 1848–49, thereby hoping to consolidate its independence. However, Croatia became the crown country during Austria in 1849. In 1867 Hungary regained Croatia, which gained some autonomy, but Croatia’s influence over budget and taxation was minimal. Some attempts were made to magyarise the country, ie. make it more Hungarian, and in 1883 Hungarian became the official language of the railway system. In 1874 a school and administrative reform was introduced in the Croatian civilian areas, which disadvantaged the Serbs in Croatia.

During the late 1800s, dissatisfaction with Hungary’s economic policy and with the dependence on Habsburg was felt by both the Croatian and the Serbian middle classes in Croatia. In 1905, Croatian-Serbian coalition parties were formed in Dalmatia (under Austria) and in Croatia. Following the collapse of Austria-Hungary in 1918, Croatia declared itself independent, but after negotiations with Slovenes and Serbs joined the first Yugoslav (South Slavic) state, Serbs, Croats and Slovenes (from 1929 termed the Kingdom of Yugoslavia) under the Serbian monarchy.

In 1904, the Croatian Peasant Party was founded, which was opposed to the merger with Serbia and which received most of the votes of the Croats throughout the interwar period. The party occasionally boycotted the parliament (Skupština) in Belgrade and sought to establish an independent Croatian peasant republic. In 1928, the peasant party leader Stjepan Radić was assassinated in parliament, and royal dictatorship was introduced in Yugoslavia in 1929. Parts of the opposition fled abroad, including Croatian nationalists, who now formed the organization Ustaša (‘rebel’). Through a Serbian-Croat compromise and a settlement with the regent in 1939, Croatia regained its political institutions and became an autonomous province, which included part of Bosnia and Herzegovina.

During World War II, with the support of Germany and Italy, the Independent State of Croatia (1941–45) was created, which included Slavonia, part of Dalmatia as well as virtually all of Bosnia and Herzegovina. Under the leadership of Ante Pavelić, the state was ruled by Ustaša, who committed genocide on the state’s Jews and Roma. Serbs would also be eliminated through mass murder, displacement and forced conversion to Catholicism. Many of Ustaša’s victims, including thousands of Croatian and Bosnian communists and other opponents of the regime, were murdered in the notorious Jasenovac concentration camp.

After the war, Croatia became one of six sub-republics in the Communist-controlled Federal Republic of Yugoslavia, where Tito became president. Following a 1966 settlement between the Vatican and Yugoslavia, Croatian nationalist opinion became more open, even within the party leadership. Claims of Croatian independence were heard during the so-called Croatian spring of 1971. In connection with this, Croatia’s party leadership resigned to Tito’s threat to intervene in the army. Large purges were carried out within the Croatian Communist Party.

On June 25, 1991, Croatia, together with Slovenia, declared independence. War on the disputed territories broke out in August between Croatia and the Serbian-controlled Yugoslav army along with the Serbs of Croatia; see further the Yugoslav wars. The ceasefire was closed in January 1992. Then the Serbs controlled 1/3 of Croatia’s territory. Croatia was recognized internationally as an independent state, and in February the UN established a peacekeeping force in the Serbian-controlled Krajina. War broke out in Bosnia and Herzegovina in April. The ultranationalist Croatian ruling party wanted to integrate western Herzegovina with Croatia. The area was proclaimed in July to the Croatian community of Herceg-Bosna. The August elections gave HDZ and Tudjman a renewed mandate to govern Croatia. The party leadership was pleased to see that Herceg-Bosna was eventually integrated with Croatia, and Croatian forces became involved in the war in Bosnia and Herzegovina on the part of Bosnian Croats and Muslims.

In 1993, fierce fighting broke out between Muslim and Croat forces over control over the territories they jointly controlled. In 1994, the United States managed Bosnia and Herzegovina’s Muslims and Croats to form a federation with a joint leadership. The Federation proposed to form a confederation with Croatia with a view to reversing the advance of the Bosnian Serb forces. The latter succeeded in 1995, laying the foundation for the Dayton Agreement, which was signed in December by the presidents of Croatia, Serbia and Bosnia and Herzegovina. In May and August 1995, Croatia took back military control of Krajina, which since 1992 has been under Serbian control and administered by the UN. Most of the Serbs fled. The UN retained control of Eastern Slavonia, which was first returned to Croatia in 1998.

The recapture of Krajina elicited feelings of national pride, which helped HDZ and Tudjman win the elections in October 1995. Also important for the election was that the Croatians in Herceg-Bosna were allowed to vote in the elections to Croatia’s parliament. Many Bosnian Croats also had extensive political influence in Zagreb during the Tudjman regime.

Independent Croatia was characterized by poor economy, high unemployment, authoritarian rule with strong presidential power, nationalism, legal insecurity, state-controlled mass media, corruption and discrimination of minorities, especially Serbs throughout the 1990s. Among other things, Serbs were dismissed in government service and replaced with Croats. Croatia was also internationally isolated because of deficiencies in democracy and unwillingness to cooperate with the War Criminal Tribunal in The Hague. After Tudjman’s death and the opposition’s entry into power in early 2000, the situation improved significantly, although much remained to be done. Among other things, attempts were made to incorporate Croatia into Western organizations such as the EU and NATO. However, the Social Democrat-led Sex Party coalition under Ivica Račan had problems holding together,

The new Prime Minister, who was a pragmatic, had over the years in opposition turned HDZ into a conservative middle party and toned down the most prominent nationalism. He continued to work for Croatian membership in the EU and NATO, and in April 2009, Croatia, together with Albania, became a full NATO member. However, negotiations on EU membership were delayed several times: first in 2004–05, since the EU felt that Croatia did not cooperate sufficiently with the Hague Court, since 2008–09 through Slovenia’s veto due to an unresolved border dispute in the Adriatic Sea. After several war criminals were extradited, including the wanted General Gotovina, and after Slovenia and Croatia agreed on border issues, a breakthrough was achieved in the negotiations for membership in the EU for Croatia. In addition, the EU demanded that Croatia deal with widespread corruption and organized crime. After more than six years of negotiations, Croatia signed an agreement on accession to the EU in December 2011. A decisive referendum was held in January 2012, resulting in a big victory for the jas side, which received 67% of the vote.

However, when Croatia entered the EU as its 28th member state on July 1, 2013, domestic policy conditions had undergone changes. After HDZ succeeded in retaining government power in the 2007 elections, the party was hit a few years later by a crisis when Prime Minister Sanander quickly resigned. He was charged and convicted in 2012 of abuse of power and corruption. Conflicts with neighboring Slovenia and Serbia hampered negotiations with the EU and adversely affected support for EU accession.

In the 2011 election, HDZ had to deal with the consequences of the deteriorating public opinion and lost almost a third of its seats in Parliament. Victors became a Valalliance with the Social Democratic Party (SDP) at the forefront. The economic situation improved during the 2000s, partly due to tourism revenue, but the economic crisis in 2008 hit the country hard.

Adaptation to the EU’s internal market and other conditions for membership, as well as widespread corruption, has affected the state of opinion regarding both party sympathies and EU membership. The sale of a number of state-controlled companies has led to worries in the labor market and fears of a lack of competitiveness in the Croatian industry. Nationalist sentiments have become more prominent in the country.

History of Croatia
Tagged on: Croatia