The riots escalated in 1996 after forces from Rwanda, assisted by soldiers from Zaire, initiated an ethnic cleansing in the eastern region of Masisi, displacing and murdering Tutsis who had lived in this area for generations. To see more information other than history, please visit Abbreviationfinder to learn more about climate, population, government, and economy for the country of Democratic Republic of the Congo. 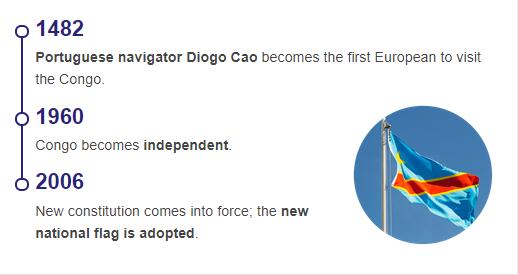 At the end of the same year, the conflict between armed groups of Tutsis and the remnants of the Rwandan army, mainly Hutus, took on the character of civil war. The conflict widened with the interference of government forces who were keen to slow the rise of the rebellious Tutsis. These had already conquered several cities in the eastern part of the country. Mobutu’s regime was seriously threatened when various opposition groups agreed to join forces under the leadership of the rebel leader, veteran Laurent Kabila. After a reconvalescence in Switzerland of almost 4 months, Mobutu returned in December 96. After staying in the country for a week and ordering a pay rise to the soldiers, the president returned to Switzerland.

Opposition forces easily conquered most of the country in early 1997 and a number of countries – i.e. South Africa, USA, France and Belgium – tried to mediate. Nelson Mandela succeeded in getting Mobutu and Kabila to meet on a ship in international waters where a transitional solution was discussed. However, the attempt failed as Kabila demanded Mobutu resign.

In March, Parliament set aside Kengo Wa Dondo and a month later Etienne Tshisekedi was appointed prime minister with Mobutu’s approval for the third time. Tshisekedi offered Kabila 6 positions in the government, i.e. the Ministry of Defense and State, but Kabila refused. Just a week later, disagreements between the ruling parties led to Tshisekedi being replaced by Likulia Bolongo. Close to the final resolution, the foreign mining companies entered into negotiations with Kabila, thus protecting their interests in Zaire.

On May 16, Mobutu fled the country heading for Marollo, and the following day the rebel forces entered Kinshasa. Kabila appointed herself new president. Mobutu died in Rabat on September 7. The country’s new strong man assumed the post of president that month, taking control of the army, parliament and administration. The new government changed the country’s name to the Democratic Republic of Congo and introduced a number of initiatives to improve the economy. Switzerland reopened an investigation into the conditions surrounding Mobutu’s wealth, which had been deposited in several of its banks.

A report by MSF confirmed at the end of 1997 the massacres of Kabila’s forces led by the Rwandan troops who assisted him. In April 1998, Kabila declared its readiness to allow UN inspectors to take action to investigate the atrocities. The UN had previously recalled another delegation after Kabila accused them of disrespecting grave sites.

That same month, the country experienced the worst floods in the past 35 years, with large areas submerged and hundreds of thousands driven on the run. The government introduced a state of emergency.

The opposition led by intellectual Ernest Wamba dia Wamba quickly gathered in the Congolese Union for Democracy (RCD). It consisted of former members of the AFPDL party, which Kabila himself had founded, Tutsi refugees and demobilized Congolese soldiers. The Union accused Kabila of returning to tribalism, and with arms support and officers from the governments of Rwanda and Uganda, it quickly occupied half the country. Kabila, in turn, struck again against the rebels during the slogan “the threat to Bantu civilization”.

The conflict quickly became internationalized and in April 1999 Kabila and the Presidents of Angola, Zimbabwe and Namibia announced the formation of an alliance in which each of its members committed to military action if one of the others was attacked. Both Angola, Zimbabwe and Namibia immediately sent troops and weapons to Kabila’s forces. In return, Rwanda and Uganda stepped up support for the rebels. Two years after the start of the civil war that brought Kabila to power, entire provinces were under the control of Rwanda and Uganda.

The conflict is largely about which multinational corporations should have control over the country’s enormous wealth. In January 2001, the conflict reached Kabila itself. He was killed in an internal showdown and his son Joseph Kabila took over the presidential post.