Different historical developments have meant that the people of East Timor have few if any common historical traditions with the rest of the people of Indonesia. Already in the Middle Ages, Timor was a center for the export of sandalwood. This product attracted colonial powers Portugal (from the 16th century) and the Netherlands (from the 1600s). Only in the 19th century was Timor gradually subject to direct colonial rule; The Netherlands gained power in the western part, Portugal in the eastern.

The Japanese occupied all of Timor in 1942–1945. The Dutch West Timor became part of the new independent state of Indonesia in 1945, while East Timor remained a Portuguese colony. To see more information other than history, please visit Abbreviationfinder to learn more about climate, population, government, and economy for the country of East Timor. Throughout the colonial period, East Timor was largely neglected by Portugal. The main interest lay in the exploitation of the wide sandalwood forests, which became virtually extinct in the 1920s. Revolt against the Portuguese regime arose in the 19th century. However, no attempt at decolonization occurred until the Portuguese military government was deposed in 1974.

A liberalization of the political restrictions led to more political parties coming to light. The two most important were UDT (União Democrática Timorensa) and Fretilin (Frente Revolucionária do Timor Leste Independente). A coup was carried out by the UDT in August 1975. After a brief civil war, Fretilin seized power while the Portuguese colony administration fled. On November 28, 1975, East Timor was declared by Fretilin to be an independent state under the name of the Democratic Republic of East Timor. Fretilin’s program was based on social development based in the Catholic Church and inspired by Latin American (Brazilian) liberation theology. 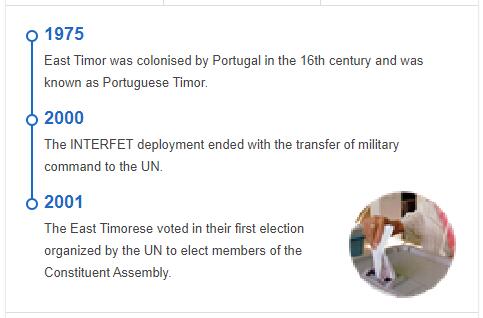 The development of the Vietnam War meant that the establishment of East Timor as an independent state and with what seemed a leftist regime was little desired by Indonesia and by Western powers such as the United States and Australia.

On December 7, 1975, East Timor was invaded by Indonesia and declared Indonesian province in July 1976. However, the Indonesian annexation was rejected by the UN, which continued to recognize Portuguese supremacy over the area. Continued guerrilla activity from Fretilin led to repeated brutal military reprisals.

After East Timor was isolated until 1990, the province was gradually opened to the outside world. A massacre during a demonstration in connection with a funeral service at Santa Cruz Cemetery in Dili in 1991 was accidentally filmed by a foreign film team. After this, the conflict got more international attention, and the pressure on Indonesia increased. After the guerrilla leader Xanana Gusmão was arrested in 1992, the armed resistance subsided. In 1996, two of the most prominent supporters of independence, Bishop Carlos Belo and ex-leader José Ramos-Horta, were awarded the Nobel Peace Prize.

After Suharto was forced to resign as Indonesia’s president in 1998, politicians who acknowledged that the time had come to find a political solution had greater influence. Immediately, some military elite units were pulled out. In August 1999, a referendum was held in East Timor, where the options for voters were internal self-government or full independence from Indonesia. The turnout for the election was 98.6%, and 78.5% of voters voted for full independence.

The UN was responsible for conducting the referendum, and the UN delegation UNAMET oversaw the election. However, a wave of violence of large dimensions ravaged the country. Pro-Indonesian militia groups, which would not accept the election result, struck with massive terror against the civilian population. According to the UN, approx. 1450 East Timorese killed and 260,000 fled into the mountains or into Indonesian West Timor. About. one third of the housing stock in the country must have been destroyed along with other infrastructure.

Following strong international pressure, Indonesia’s President Habibie agreed in September that an international peacekeeping force, INTERFET, should be deployed in East Timor. This was done under the auspices of the UN and under the leadership of Australia. In October, Indonesia’s top assembly decided that East Timor should be granted independent state status. After that, neither the government of Jakarta nor the Indonesian army could justify further interfering in the independence process. In late October, the last Indonesian soldiers left East Timor.

The UN assumed responsibility for East Timor at the turn of the year 1999/2000. The basis was a decision in the Security Council that the UN agency UNTAET should administer the territory until a national assembly was elected and established; the date was later set for May 20, 2002. The UNTAET covered approx. 9500 soldiers, police and civilians. Elections were held in August 2001, with Fretilin as the dominant winner with 55 out of a total of 88 seats in the National Assembly. Dozens of small parties shared the other seats, but were left with no real influence. Prime Minister Fretilin’s long-time party leader, Mari Alkatiri.

The foremost figure of the liberation movement, former guerrilla leader Xanana Gusmão, was elected president of the country in April 2002. He refused to stand as Fretilin’s candidate and accepted the nomination from an alliance of small parties, thereby counterbalancing Fretilin’s dominance. This led to conflict between the president and parts of the Fretilin leadership with Prime Minister Alkatiri at the head. The contradiction between the nation’s two top leaders gradually grew tighter. In the population, dissatisfaction grew that the high expectations of the new state were not met, with increasing political and social turmoil in the years following independence. In 2006, East Timor was still Asia’s poorest country, with an average income lower than in 2002 – approx. one dollar a day, according to UNDP. Ethnic conflicts also prevailed, especially within the security forces.

The UN gradually reduced its presence after independence. In 2002, the transitional authority UNTAET was replaced by a less comprehensive support body, UNMISET, which was later replaced by other UN agencies with civilian and military advisers.

An East Timorese defense force was established in 2001 with approx. 1400 soldiers, mainly from the former guerrilla army Falintil. There were clear contradictions between officers and crews from the east and west coasts of the island state. In March 2006, 600 soldiers from the western region were fired after protest and strike actions against alleged discrimination and poor living conditions. The mutineers organized armed resistance and support together with loyal forces; At the same time, Dili and other cities were ravaged by youth gangs of different ethnicities. At least 27 people were killed. Behind the turmoil lay ethnic tensions between people east and west on the island state.

At the urging of the government, the UN again embarked on a peacekeeping force of 2,700 men from Australia, New Zealand, Malaysia and Portugal. A political tug of war between President Gusmão and Prime Minister Alkatiri ended in June 2006, forcing the prime minister to resign. Former Foreign Minister and Peace Prize winner José Ramos-Horta took over the Prime Minister’s post.

Choosing and switching at the top

The political landscape in East Timor changed drastically in 2007-2008, in the wake of the riots in 2006. In May, Nobel Laureate José Ramos-Horta changed his leadership from prime minister to president. Former President Xanana Gusmao did the opposite: He became prime minister after the election victory. The previously so dominant Fretilin party lost its previously so firm grip on power. In 2008, both top executives were attacked. Ramos-Horta was life-threateningly wounded, but survived thanks to intensive hospital treatment in Australia.

In the May 2007 presidential election, the first since East Timor gained independence in 2002, Ramos-Horta collected 69% of the votes in the second round of elections. 31% went to former guerrilla commander Fransisco Guterres, who was Fretilin’s candidate.

The release hero Xanana Gusmao had been head of state since independence, but failed to stand for re-election as president. In East Timor, the prime minister has most of the power, while the president mainly has a ceremonial function. Gusmao went to the parliamentary elections in June 2007 at the head of a newly formed party, the National Congress for the Restoration of East Timor (CNRT). The new party entered the electoral alliance with three other parties, which together received 51% of the vote and 37 of 65 parliamentary seats.

The election was another setback for Fretilin, who had been the driving political force during and after the liberation struggle against the Indonesia army. In recent years, Fretilin has been shattered and substantially weakened, especially when East Timor was ravaged by bloody riots in 2006 following unrest within the defense.

Gusmao tried for a long time to form a national unity government, but the attempt was stranded under Fretilin counterintelligence. On August 8, however, he was appointed prime minister by his close political ally, President Ramos-Horta. This was fiercely criticized by Gusmao’s political opponent, Mari Alkatiri, the head of Fretilin and the prime minister, until he was deposed by then-President Gusmao during the riots in 2006. Alkatiri declared that Fretilin would not cooperate with Gusmao’s “illegal and unconstitutional government”. Alkatiri claimed that he himself, as leader of the country’s largest party with 29% of the vote, had a constitutional right to form government.

Violent clashes in 2007 were also marked by violent clashes, but by far the same extent as the unrest in May 2006, when at least 37 people were killed and 150,000 chased away from home. This happened after the Alkatiris Fretilin government had fired 600 soldiers. These were officially condemned as mutiny, but claimed to be victims of systematic discrimination on an ethnic basis.

International troops moved in to stop the fighting in 2006. Since then, the UN has strengthened its presence through the UN mission UNMIT. The presence of international security forces under Australian leadership and police forces under UN leadership here made it easier for authorities to handle the situation. In total, the peacekeeping forces count approx. 3,000 men, along with a few hundred observers and political advisers.

Attacks against the country’s top leaders

On February 11, 2008, President Ramos-Horta was hit by three gunshots and life-threatening wounds when he was attacked by rebellious soldiers. Prime Minister Gusmao escaped unscathed when he was attacked by another group of rebels on the same day. The prime minister described the attacks as a coup attempt. The rebel leader, Major Alfredo Reinaldo, was killed during an exchange of gunfire with the president’s bodyguards. Horta was operated on several times at a hospital in Australia and regained consciousness after ten days in a coma.

Australia sent an additional 350 troops to reinforce the UN Integrated Mission in Timor-Leste (UNMIT). The Security Council has extended the UNMIT mandate at that time to 26 February 2010.