The Swazi people are descendants of both immigrant Bantu people from Central Africa and a relatively new social and political grouping. Archaeological finds show that people have been living in Swaziland for at least 250,000 years. Traces of mineral recovery have been found approx. 42,000 years back, one of the oldest examples of simple mining and trading in the world. About 20,000 years ago, the ancestors of the San and Khoikhoi people lived in the country.

For approx. 2,000 years ago, groups of Bantu-speaking people (nguni, sotho, tswana) immigrated south of the Limpopo River, established livestock farming with animal husbandry, and extracted iron. These groups formed several communities and state formation, also in the later Swaziland, where the Dlamini clan, belonging to the nguni people, eventually came to power. After settling in present-day Maputo (Mozambique), the Dlaminians migrated south in the mid-18th century. About. In 1770, King Ngwane 3 established the core of what became the Swazination. Exposed to pressure from other dominant people in the region, especially ndwandwe and zulu, a Swazi kingdom was established as a unified state at the beginning of the 19th century, under Sobhuza 1. It based its power on strong military organization and active diplomacy. The Dlamini kingdom was greatly expanded during Mswati 2’s reign (1840-68). It was during his regime that the nation got its name – Mswati’s people, Mswazi, who became Swaziland. In the reign of King Sobhuza 1 (1818–38), new territories were incorporated into Swaziland, which by the end of the 19th century was about twice the size of today’s state. To see more information other than history, please visit Abbreviationfinder to learn more about climate, population, government, and economy for the country of Swaziland. 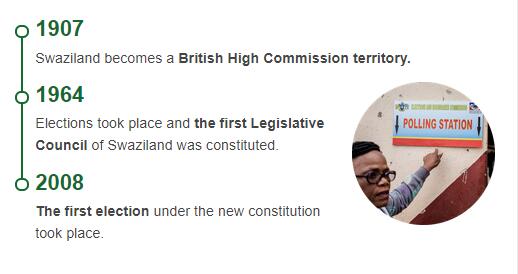 In the second half of the 19th century, the kingdom’s territory was reduced as a result of increasing pressure from the Transvaal Boer Republic and British interests. Swaziland welcomed a large number of Europeans, who were granted licenses for the exploration of minerals and for hunting, which led to the country’s long-standing loss of independence. In 1875, Transvaal guaranteed Swaziland independence. The Pretoria Convention between the United Kingdom and the Transvaal Republic of 1881 recognized both its independence and Swaziland’s independence, but at the same time half of the kingdom’s land area was subject to Transvaal and Swaziland reduced to the present size. As a result of an agreement between South Africa and the United Kingdom, in 1894 Swaziland became one protectorate under South Africa and the Government of the Transvaal took over in 1895 the administration of Swaziland. With Transval’s autonomy in 1906, Swaziland became subject to Britain’s High Commissioner for South Africa, in line with Basutoland and Bechuanaland. During the work of establishing the South Africa Union (1910), it was assumed that the three territories would be incorporated into the Union. Although several South African governments pursued the case against the United Kingdom, claiming Swaziland, Swaziland remained outside the Union and the later Republic of South Africa.

The Royal House traditionally operated under British rule, and King Sobhuza 2 was inaugurated in 1921, although his rule was first recognized by Britain in 1967. British rule neglected the social and economic development of Swaziland, until the years of independence. A 1963 constitution opened to inner self-government, and a governing council and a legislative assembly were set up. In the 1967 elections, the royal, conservative party Imbokodvo National Movement (INM) won all 24 seats in the new National Assembly; the more radical Ngwane National Liberatory Congress (NNLC) became the official opposition.

The Kingdom of Swaziland was formally proclaimed on April 25, 1967, and the king’s position as monarch, who under British rule was reduced to a supreme chief, was restored. On September 6, 1968, Swaziland became independent with Sobhuza 2 as head of state. He gained more and more power, declared himself unanimous in 1973 and set aside the Constitution. The king banned all party political activity, and Swaziland became a “non-party” state. Sobhuza dissolved the parliament at the same time, and parliamentary democracy has not since been re-introduced in Swaziland, although the country has an indirectly elected national assembly. Nor did the new Constitution of 2006 open to party political activity.

King Sobhuza’s death in 1982 led to a multi-year power struggle inside the royal house, and only in 1986 was a new king inaugurated; Mswati 3. He quickly indicated that he would maintain the strong position of the monarchy and that it would not be introduced democratically governance. Demands for free political activity and multi-party rule grew in the 1990s, supported by several general strikes, and several political organizations were established, in violation of the country’s law. They have thus not been able to stand for election to the National Assembly, where only individuals can stand as candidates. The new constitution, which came into force in 2006, introduced freedom of organization, but political parties remained banned. The leading (illegal) party is the People’s United Democratic Movement (Pudemo). The party’s leader, Mario Masuku, was arrested in 2008 on suspicion of involvement in a failed bomb attack on the royal palace; released in 2009. At the election of a new national assembly in 2008, independent candidates, the opposition boycotted the election.

King Mswati has faced growing criticism, nationally and internationally, both for his opposition to democracy and for widespread spending on anniversary celebrations and airline purchases at a time when Swaziland has been in a severe economic crisis, further compounded by the AIDS epidemic.

Swaziland has, in keeping with its policies, pursued a conservative and Western-oriented foreign policy, with close relations especially with the United Kingdom and the United States, and a generally good relationship with its neighboring countries.

Relations with the other neighboring country, Mozambique, have also been good, although there has been controversy over the exploitation of the Komati River water. In the 1990s, the United States marked its dissatisfaction with a lack of democratic development by withdrawing its Peace Corps participants and moving its regional office for the USAID aid organization to Botswana. The United Kingdom is a key contributor.

History of Swaziland
Tagged on: Eswatini