The Irish monk Dicuil mentions about 825 some distant Atlantic islands, usually identified with the Faroe Islands, which, almost a hundred years earlier, were populated by Irish hermits but later abandoned due to the ravages of Nordic pirates. In the Icelandic “Faroe Islands saga” it is stated that the first residents of the Faroe Islands settled on the islands during the days of Harald Hårfager (ie about 865 – about 933). This written information is uncertain.

The archaeological remains mainly consist of settlements and tombs of a Nordic nature (but with cultural features from the British Isles) and have so far been traced back to the 9th century. Pollen analytical indications of agriculture have been dated to the 600s with carbon-14 analysis.

The Norwegian king’s supremacy over the Faroe Islands was last recognized in the 1100s (1035 is traditionally stated). The country was christened in the 11th century and became a diocese, with its bishop’s seat in Kirkjubøur (c. 1120), under the Norwegian archdiocese. Norwegian laws applied in the Faroe Islands, but certain special provisions existed. The supreme authority in the country was the legislature, under the direction of the lawyer. 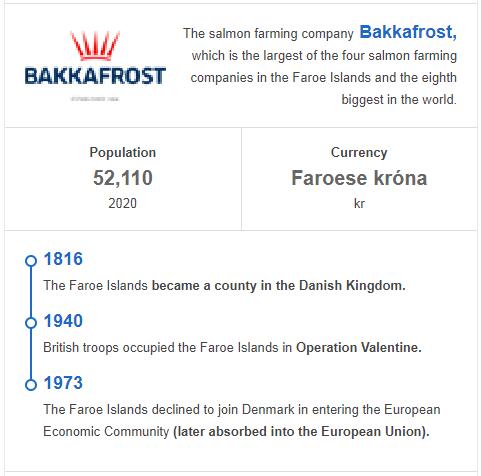 After the fall of the one-world government in Denmark 1848–49, the Faroese gained representation in the Danish Parliament, and the legislature was re-established in 1852 as an advisory assembly. At this time, a movement began to develop a Faroese nationality. A Faroese writing language was created by Hammershaimb (1846). However, the Faroe Islands were not equated with Danish until 1948. Around the turn of the century, the national movement, led by Jóannes Patursson, was intensified, which in 1906 founded the self-government party.

The old Faroe Islands were a farmer’s and fisherman’s community, where the tenants of the Crown’s farms, the King’s peasants, together with the priests and a few large landowners constituted an elite. In the past, the higher officials were mostly Faroese, after 1816 Danes. The only city, Tórshavn, where the legislature met and where the monopoly trade was concentrated, was too small for a domestic bourgeoisie to emerge. But in 1856 the trade was released, and during the end of the 19th century fishing was commercialized. The population increased (1860: 8 922, 1935: 25 744 residents), and new social groups were added, especially in expanding fishing ports such as Tórshavn, Tvøroyri and Klaksvík.

During the Second World War, the Faroe Islands came to function independently in practice. Since Germany occupied Denmark, the United Kingdom occupied the Faroe Islands on April 13, 1940. With the Home Rule Act 1948, the Faroe Islands gained extensive self-government. The layman became the prime minister in a government (land government) responsible for the laying. The Faroe Islands, unlike Denmark, are not members of the EU. A number of other areas have symbolically marked their special position. For example, the Faroe Islands were again made their own pin in 1990, and the same year began to take part in international football tournaments with their own national team. During the post-war period, the economy based on fish exports developed strongly. The standard of living is today at the Nordic level, though at the price of a huge foreign debt.

In the early 1990s, the Faroe Islands suffered a severe economic and state financial crisis. Unemployment and emigration to Denmark followed. In 1993, the government took over the largest bank Føroya Banki from Den Danske Bank. However, it turned out to be bankrupt, which cost Faroese taxpayers large sums. The Faroese accused Den Danske Bank and the Danish government of bringing the government behind the light, accusations that were supported by a Danish investigation in 1998. The bitterness against the Danes in the 1998 elections led to a government with a more independent position for the Faroe Islands on its program. The economic situation has stabilized, and in 1997 the state budget was again in balance.