To see more information other than history, please visit Abbreviationfinder to learn more about climate, population, government, and economy for the country of Georgia.

In early 1993, the Russian Air Force launched bombings of Sujumi, and by mid-March, fighting had reached the outskirts of the city. On June 28, a Russian ceasefire was concluded. Both parties had to withdraw their troops from the front and disarm them.

In mid-September 1993, however, the Abkhaz began a major offensive that came as a total surprise to the Georgians and culminated with the capture of Sujumi. Edvard Shevardnadze stayed in town for the last time and reached the final flight. 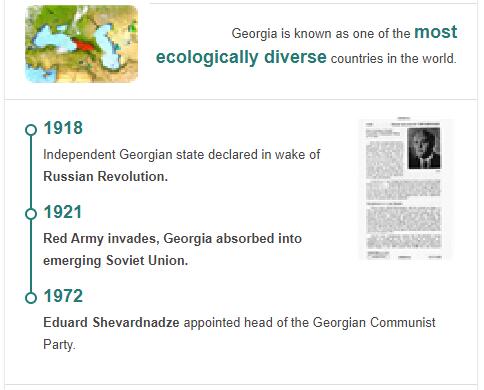 In November, supporters of the toppled President Gamsakurdia embarked on a comprehensive offensive, but were beaten following the intervention of Russian forces. That same month, Georgia joined the Association of Independent States (CIS). In early 1994, Gamsakurdia died. Acc. the official version he had committed suicide. In February, the country signed a friendship agreement with Russia and in April a peace treaty was signed in Moscow with the Abkhazian rebels.

In addition, despite Moscow’s approach, Georgia was included in the NATO Partnership for Peace. The country was unable to pay its debt to Turkmenistan, which led to a reduction in gas supplies – Georgia’s main source of energy. At the end of November, the capital Tbilisi had neither heat, electricity nor running water.

The economic situation improved in 1995. In the first 11 months of the year, industrial production increased by 20%. In August, Parliament passed a new constitution that made the country a presidential republic. The November presidential election was won by Shevardnadze and his party, the Union of Georgian Citizens got 124 of Parliament’s 235 seats.

In 1996, the economy stabilized further. GDP increased by 8% and industrial production by 10%. Inflation was 30%, but the currency retained its value against the dollar. Yet unemployment remained at 20% high. The IMF and the World Bank granted loans to support the economic plan. Despite protests from Russia, Georgia entered into an agreement with Azerbadjan on the construction of an oil pipeline through Georgian territory, in order to facilitate the export of Azerbaijan oil.

In November 1997, Georgia became the first former Soviet republic to give up the death penalty. In Russia and Ukraine, the parliaments opposed adopting similar steps that had otherwise been proposed by the governments of these countries.

In February 1998 and again in May 1999, assassinations almost cost President Shevardnadze life. In both cases, mention was made of Moscow’s possible participation in the attacks, the purpose of which was to prevent the building of an oil pipeline through the country. Azerbaijan’s choice of this pipeline had crushed a Russian proposal to allow it to pass through Chechnya, where the Russian army had fought the independence movement for years and ravaged most of the region’s cities. The Georgia Pipeline finally opened in April 1999. A senior Georgia officer was charged with organizing the conspiracy internally in Georgia.

In the outbreak Republic of Abkhazia, in October 1999, Parliament declared the area independent, following a referendum in which 98% of the vote was for independence. Tbilisi denounced the statement as illegal and urged other countries not to recognize the new state. Although the two republics signed a non-attack pact in March 2001, new fighting broke out between Georgian paramilitary groups and Abkhazian troops in October.

In the November 1999 elections, the presidential party, the Citizens’ Union, got about 40% of the vote, while the Renewal Movement got 27%. It is a very broad coalition of populists, right-wing nationalists, socialists and monarchists. The turnout was below 70%. Shevardnadze characterized the election results as excellent and that it would enable Georgia’s accession to NATO in 2005.

History of Georgia
Tagged on: Georgia