The world’s largest island Greenland is geographically part of North America but is politically part of the Kingdom of Denmark, although the Greenlanders have far-reaching self-government. Dependence on Denmark has diminished in recent years, but Danish financial contributions still represent a significant contribution to the local economy. Shrimp fishing is the most important industry.

The demand for home rule in Greenland arose in connection with Denmark’s entry into the EC. In the referendum on enrollment in the Community in 1972, there was 70.3% opposition to entry, but since Greenland did not, as in the Faroe Islands, have a home rule system, Greenland had to follow Denmark into the EC.

In 1975, a joint Danish-Greenlandic commission was set up, which in 1978 burst with a report on the introduction of home rule in Greenland. The Home Rule was subsequently introduced per. May 1, 1979, and the Home Rule has since then taken over all the areas that could, according to the report, be transferred to the Home Rule Administration, most recently the administration of the mineral raw materials that were taken over by July 1, 1998. Areas such as justice and foreign and security policy, however, are still under Danish administration.

The first political goal for the home-directed Greenland was the withdrawal of the EC, and after a referendum in 1982 and negotiations with the European Commission, Greenland withdrew from the EC as a whole. 1 February 1985. Greenland then has a fisheries agreement with the EU as well as duty-free access for Greenlandic fishery products to EU markets. The agreements are regulated in 6-year protocols containing agreements on quotas and payment to Greenland for EU fisheries. Greenland and the EU are currently negotiating the 4th Protocol to enter into force on 1 January 2001. Negotiations are expected to be completed in the summer of 2000. 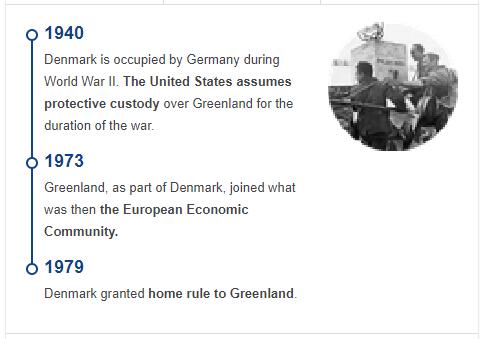 A Judiciary Commission, set up by the Minister of Justice in 1994, is currently working on a revision of the Greenland Criminal Code and the Greenland administration in general. The Commission is expected to report in 2000.

As part of the coalition agreement between Siumut and Inuit Ataqatigiit, at the end of 1999, an autonomy commission was set up. It is especially the desire for increased competence in the foreign policy area, which is focused on from Greenland.

In 1992, Greenland established a representative office in Brussels and in 1999 in Ottawa.

The Inuit Circumpolar Conference (ICC) is a regional collaborative organization established in 1977 in Barrow, Alaska. Until 1992, the participants consisted of Inuit from Alaska, Canada and Greenland. After that, the Russian Inuit are also represented. The ICC has observer status in relation to the work of the Arctic Council.

History of Greenland
Tagged on: Greenland