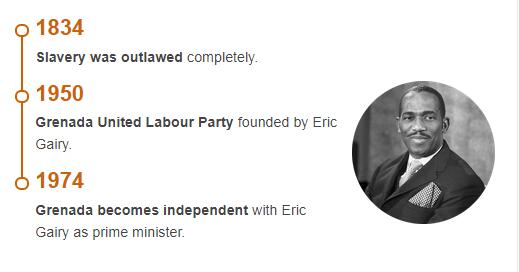 The island was ruled by Caribbean Indians when it was discovered by Columbus in 1498. It was taken into European possession only in the 1650s through France. The years 1763–79 and 1783–1958, Grenada was a British colony and belonged to the Caribbean Federation in 1958–62.

The country gained internal autonomy in 1967 and in 1974 full independence. Eric Gairy, leader of the Grenada United Workers’ Party (GULP), became the country’s first prime minister. He was deposited in a coup d’etat staged in March 1979 by the New Jewel Movement (NJM) under the direction of Maurice Bishop and Bernard Coard. Bishop’s socialist government aroused strong opposition in The United States, which saw Cuban and Soviet influence grow in the Caribbean. In October 1983, internal disputes within NJM led to Bishop’s fall and execution. The coup makers, with Commander Hudson Austin in the lead, were in turn deposed by an American-Caribbean force (see the Grenada Invasion). A provisional government led the country to the December 1984 elections, when the New National Party(NNP), a liberal-conservative coalition, gained an overwhelming majority, and the party’s leader, Herbert Blaize, was able to take over as prime minister. However, the vast majority of the NNP was quickly eroded. Blaize died in 1989 and was replaced by Ben Jones. The 1990 election was won by the 1987 National Democratic Congress (NDC) formed, led by Nicholas Braithwaite, who was also elected prime minister.

During Braithwaite’s reign, the country suffered from economic problems; prices fell on bananas and spices, which led to social unrest. Grenada’s foreign policy has been characterized by good relations with the United States and the Caribbean since the fall of the Bishop Government in 1983. The country is member of Caribbean Community and Common Market, CARICOM, and diplomatic relations with Cuba have been resumed. To see more information other than history, please visit Abbreviationfinder to learn more about climate, population, government, and economy for the country of Grenada.

In the 1995 parliamentary elections, the NNP regained power and Keith Mitchell became new prime minister. Mitchell and the government were boosted by favorable economic development around the turn of the millennium and were able to retain power in just two major elections in the two subsequent elections.

In 2004, Grenada was hit by Hurricane Ivan with great material destruction as a result. Partly as a result of the NNP government’s failed actions following the hurricane, the opposition party won the NDC parliamentary election in 2008 and its leader Tillman Thomas formed the government. However, Thomas did not succeed in retaining voter confidence and in the 2013 election, NNP won all the seats in the House of Representatives. Keith Mitchell once again became government and prime minister.

History of Grenada
Tagged on: Grenada