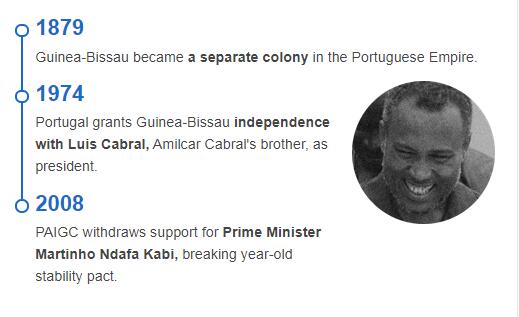 The area of ​​present-day Guinea-Bissau encompasses low periphery in relation to the major trade routes passing through the Sahara. It was only during Ghana’s expansion in the 800s that immigration increased. During the decline of Ghana in the 13th century, new groups sought refuge in the area, which was then incorporated into the mighty Mali kingdom. Today’s population structure was established during this time. Only Fulani people came later, in the 15th century. Then the Portuguese also made their first contacts. Arable farming was developed, especially rice cultivation, and production and export of sea salt started.

The Portuguese began to import slaves from the Guinean mainland to Cape Verde in the 1440s. Later slaves were also exported across the Atlantic. During the 17th and 18th centuries, British and French set up trading stations on the present coast of Guinea-Bissau. In 1879 Portugal declared the area a Portuguese colony, called Portuguese Guinea, but only after the Berlin Conference in 1884-85 was Portugal’s claim recognized. However, it was not until 1915 before the Portuguese could be considered to have reasonably effective military and administrative control over the colony.

A liberation movement, Partido Africano da Independentia da Guinea e Cabo Verde (PAIGC), was established in 1956 by Amílcar Cabral. PAIGC demanded independence from both Portuguese Guinea and Cape Verde at the time, and launched an armed struggle in 1961. The fight in Guinea-Bissau was successful both politically and militarily. In 1973, PAIGC proclaimed Guinea-Bissau as an independent state. To see more information other than history, please visit Abbreviationfinder to learn more about climate, population, government, and economy for the country of Guinea-Bissau. In April 1974, the dictatorship fell in Portugal, and September 10 of that year, Portugal recognized Guinea-Bissau’s independence.

With deepening stagnation and aid dependency – Sweden has been one of the very largest donors – Guinea-Bissau became a given target for the World Bank and International Monetary Fund’s economic reform program (so-called structural adjustment). The first agreement with the Government of Guinea-Bissau came in 1983. It was not until the 1990s that economic liberalization was followed by political democratization. The first multi-party was held in 1994. The implementation was correct and the elections led to continued PAIGC rule. In the same year, Vieira was elected president for a new term.

In June 1998, during the preparations for the next parliamentary elections, an armed uprising led by the recently dismissed Commander-in-Chief Ansumane Mané (c. 1940-2000) erupted. Although soldiers from Senegal and Guinea came to the rescue of the government, the following months the myths were able to take control of most of the country. Arms rest began on November 1 after mediation by the West African collaborative organization ECOWAS. A unifying government took office in 1999, and the Senegalese and Guinean soldiers were replaced by an international force from ECOWAS. In the same year, Vieira was ousted by the military, and Parliament Speaker Malam Bacai Sanhá (1947–2012) temporarily resigned as President. Vieira escaped in Portugal.

In the 1999 parliamentary elections, PAIGC declined sharply, and a government dominated by the Partido para a Renovação Social (PRS) took office. In the second round of the 2000 presidential election, Kumba Ialá (1952–2014) won the PRS over Sanhá. In November of that year, Ansumane Mané led a new armed uprising, but this time was quickly defeated, after which Mané was shot dead in flight.

In 2001 and 2002, dissatisfaction grew with Ialá, who was accused of in several cases exceeding his powers. In 2002, Ialá dissolved the parliament and dismissed the government. New elections were promised but postponed in rounds. The following year, Ialá was deposed in a bloody coup and provisionally succeeded by company manager Henrique Rosa (1946–2013). It was not until 2004 that parliamentary elections could be held. Since PAIGC again became the largest party, but without its own majority, a coalition government led by PAIGC leader Carlos Gomes Júnior (born 1949) was formed. Before the presidential election the following year, Vieira returned to the country and as an independent candidate he was re-elected president.

The years that followed were marked by political unrest with several shifts in the Prime Minister’s post. In addition, the country was affected by cholera epidemics in both 2005 and 2008 with hundreds of deaths as a result. In the 2008 parliamentary elections, PAIGC received 50 percent of the vote and 2/3 of the mandate. In the same year, Guinea-Bissau was granted special support from the UN Peace Building Commission as a third country.

In March 2009, Army Chief General Tagme Ne Waie was killed in a bomb attack and a few hours later President Vieira was shot to death by soldiers who had been close to the general. In June, several politicians were killed by soldiers following allegations of coup attempts. After all, presidential elections were held later that summer and in the second round of elections, PAIGC candidate Malam Bacai Sanhá prevailed. The political turmoil has continued with demonstrations, alleged coup attempts and outbreaks of violence in Bissau.

In January 2012, Sanhá passed away and was temporarily replaced by Parliament’s President Raimundo Pereira (born 1956). In the presidential election held in March of that year, Carlos Gomes Júnior, who resigned as prime minister to run for office, received 49 percent of the vote in the first round. The second of the elections, former president Kumba Ialá, questioned the election results and refused to participate in the second round of elections. However, such a thing never came to fruition since the military took power in a coup in April.

Juntan was put under intense pressure from an international perspective, and the transitional council that was formed appointed the third presidential election, Manuel Serifo Nhamadjo (1958-2020) from PAIGC, as interim president. Only after the junta agreed to the West African cooperation organization ECOWAS that elections should be held within twelve months and that a regional military force be sent to the country, Nhamadjo accepted the assignment.

After several postponements, elections were finally held in April – May 2014. Former President of the Finance Minister José Mário Vaz (PAIGC) was elected president, and in the parliamentary elections PAIGC received 55 seats against 41 for the PRS. Since the end of 2015, Vaz has fought a political battle against the leading forces within PAIGC. In early 2016, the president dismissed Prime Minister Carlos Correia (born 1933) and PAIGC has subsequently refused to recognize the people whom Vaz appointed to the post. In 2018, the parties finally agreed that a collaborative government with representatives from PAIGC and PRS would rule the country until the next parliamentary elections. These could be held in the spring of 2019.

PAIGC became the largest party but was forced to seek support from several smaller parties to gain a majority in Parliament. Party leader Domingos Simões Pereira (born 1963) was expected to take over as head of government. However, Vaz opposed this and reappointed Aristides Gomes (born 1954).

Since 2006, Guinea-Bissau has become increasingly associated with drug smuggling – mainly cocaine – from Latin America to Europe. Uninhabited islands off the country’s largely unguarded coast are used as transit stations for the drug. Senior figures, including in the military, are suspected of being involved in the handling.

The military generally has great power in the country and has often interfered with politics. In 2010, soldiers remained loyal to Deputy Army Chief António Indjai, among others Prime Minister Carlos Gomes Júnior hostage, according to many analysts because of a planned defense reform that would reduce the number of soldiers. The April 2012 military coup was seen by many as a way to prevent Gomes Júnior from joining the presidential power.