Guinea was originally populated by pygmies, which however, immigrant peoples forced back to the most inhospitable parts of the country. The country was early linked to the trade with Sudan. To see more information other than history, please visit Abbreviationfinder to learn more about climate, population, government, and economy for the country of Guinea.

For centuries, gold mines in Bambuk supplied gold to the Mediterranean trade. They were located on the slopes of the Fouta Djallon mountain ridge (see also Mali and Morocco). The same area was in it 6-11. century scene for the emergence and decay of Fulanist states (see Senegal).

Under these circumstances, in 1870, Samori (1840-1900) became head of state including Guinea as well as parts of present-day Mali and Ivory Coast. In 1886 he first came into battle with French troops invading the country from Senegal. The fighting continued until 1898, when the Almany – the political-religious title he had assumed in 1870 – was captured and sent to Gabon, where he died two years later. 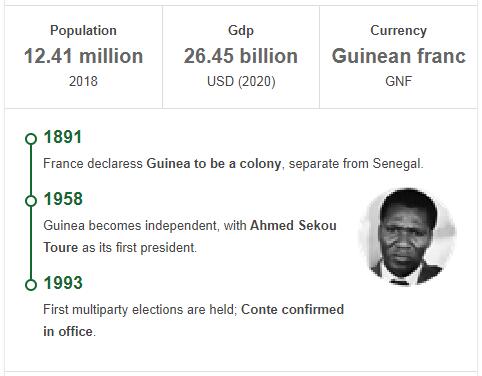 Back was a small core, led by Ahmed Sekou Touré, who in 1947 founded the Guinea Democratic Party (PDG). The party supported the trade union movement and quickly became an organization with great support for the people of Guinea.

In the 1950s, the French colonial power saw its colonial empire collapse. In 1954 it lost Indochina, the same year the Algerian revolution started and in 1956 Tunisia and Morocco fought for independence. (See also: Decolonization ). In a desperate attempt to preserve French colonial interests in sub-Saharan Africa, De Gaulle established “the French Community” in 1958.

On the basis of agreements, France sought to establish a neocolonial system that could guarantee continued French hegemony – first and foremost in the economy under French monopoly control. In Guinea, a referendum was held on De Gaulle’s plan, but it received only 57,000 votes, while 1,200,000 said no.

Four days later, Guinea declared itself independent. The country’s new president Sekou Touré declared: “We prefer poverty in freedom rather than wealth in slavery”. It was the first time such a move was taken in the French colonial regions of sub-Saharan Africa, and Paris responded with retaliation by withdrawing its technical advisors, ending the country’s few industries and instituting a trade blockade against Guinea.

In 1959, the state took control of the economy and created with immediate effect its own currency, independent of the French franc. At the same time, the country embarked on a development policy in which industrial and agricultural development was oriented towards self-sufficiency. At the same time, bauxite production increased to over 1 million tonnes annually.

But at the same time, French aggression increased: the country’s bank accounts in Paris were blocked, the smuggling took off and fake money was put into circulation.

In 1970, the country was invaded by Portuguese mercenaries trying to bring down the government and wipe out PAIGC’s bases in the country. PAIGC was fighting at the time for Guinea-Bissau’s secession from the colonial power of Portugal. As a result of the increasingly frequent and more intense destabilization of the country, Local Revolutionary Councils (PRL) were set up in each district and village to combat corruption, decay and smuggling.

In November 1978, Congress decided to change the country’s name to the Revolutionary People’s Republic of Guinea and begin normalizing relations with France. At the same time, Touré broke his long isolation to visit African and Arab capitals. The purpose was to provide additional sources of foreign capital in order to utilize the country’s mineral resources as well as attract investments that could contribute to a solution to the country’s foreign debt.

History of Guinea
Tagged on: Guinea