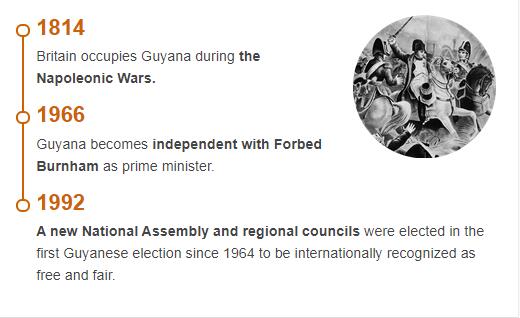 Prior to the arrival of the Europeans, the area was inhabited by various Native American people, including Arawaks and Caribs. The coast of Guyana was visited by the Spaniards as early as 1500. The Dutch settled here in the 17th century, and during the Napoleonic wars the area was occupied by Britain. In 1814, the Netherlands recognized Britain’s supremacy over Guyana, and in 1831 the colony of British Guiana was formed. The Netherlands had developed Guyana into a major producer of sugar and imported large quantities of African slaves as labor. The decision in 1833 to free the slaves throughout the British Empire had a decisive influence on the history of Guyana. The plantation owners were forced to seek labor on new roads. Between 1838 and 1917, almost 240,000 Indians and a few thousand other agricultural workers were attracted to Guyana. A rift soon arose between black Africans, who later moved into the cities, and Indians, who came to form the majority of the agricultural population.

After World War II, Cheddi Jagan became the leader of the Indians and Forbes Burnham the black. Together they formed the 1950 People’s Progressive Party (PPP). The party got a radical profile from the beginning and won the first general election in 1953. PPP was split in 1955; Burnham left the party and formed the People’s National Congress in 1957(PNC). A growing ethnic rivalry delayed Guyana’s independence and in 1964 led to serious racial slurs. In 1966, Guyana, under the leadership of Burnham, was declared independent within the British Commonwealth, and for the following 26 years Guyana became politically dominated by the blacks. The PNC’s position was strengthened in the 1968 election, and an increasingly radical leftist policy was initiated. In 1970, Guyana was transformed into a “cooperative republic”, and the following year a nationalization of the country’s important bauxite mines was initiated. To see more information other than history, please visit Abbreviationfinder to learn more about climate, population, government, and economy for the country of Guyana. At the same time, the contradictions between the PNC and the PPP deepened, although both parties, like the 1974 Working People’s Alliance (WPA), declared themselves Marxist.

Burnham ruled the country until his death in 1985. Vice President Desmond Hoyte (1929–2002) then took office and strengthened his position through the PNC’s major election victory in December of that year. To the surprise of many, Hoyte initiated a policy that ran counter to Burnham’s. Democratization, economic liberalization and austerity as well as an approach to the United States characterized Hoyte’s policy, which led Guyana from its previous international isolation. In the 1992 elections, the PPP returned to power, and Cheddi Jagan was named president with the promise of pursuing a market economy policy and reducing ethnic contradictions. The latter, however, have not ceased but rather intensified. Cheddi Jagan died in 1997 and was succeeded by his wife Janet Jagan (1920–2009)). But her entry into office led to a political crisis when the opposition with Hoyte at the head accused her of electoral fraud. After only two years, she resigned and was succeeded by her finance minister Bharrat Jagdeo. During his time as president, the political battle between the PPP and the PNC was first deepened, which among other things boycotted the work of Congress for a year. Only when PNC party leader Hoyte died in 2002 and was replaced by more pragmatic forces did a dialogue begin between the two parties. In August 2006, Jagdeo took up a second term in office. PPP also triumphed in the 2011 election. Jagdeo was not allowed to sit for another term, and a new president was appointed Donald Ramotar.

In the 2015 election, opposition alliances managed to get a scarce majority in parliament and David Granger, leader of the PNC Reform, which the party now calls itself, became a new head of state.

History of Guyana
Tagged on: Guyana