Haiti was before the Europeans’ arrival inhabited by around half a million taino – Arawak. These were used as slaves on sugar plantations and almost exterminated by the Spaniards over 50 years. From 1512 a large number of African slaves were introduced. In 1697, Haiti was taken over by France.

After the French Revolution, in 1804, Haiti declared itself independent of France. Political chaos has characterized the country for almost its entire history. To see more information other than history, please visit Abbreviationfinder to learn more about climate, population, government, and economy for the country of Haiti. The dictators François Duvalier (“Papa Doc”) and Jean-Claude Duvalier (“Baby Doc”) ruled the country during the periods 1957–1971 and 1971–1986 respectively. An initial democratization process was interrupted by a military coup in 1991. Civilian rule was restored in 1994 following intense pressure from the UN and the United States. 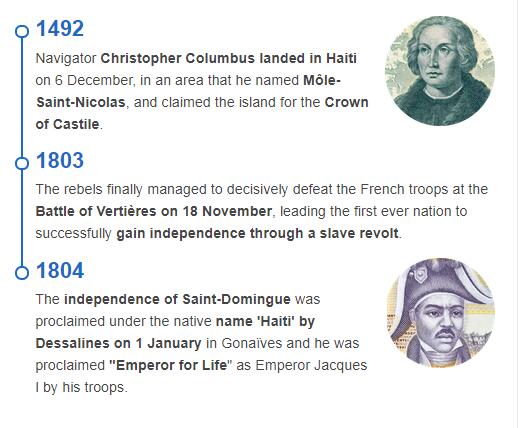 Before Kristoffer Columbus arrived on the island which he called La Isla Española in 1492, it was inhabited by about half a million taino arawaker who ran agriculture and fishing. The Spaniards almost exterminated this population over the course of 50 years, including by slave operation on sugar plantations created in 1506. From 1512, significant amounts of African slaves were introduced. However, the Spaniards found little interest in the western part of the island, which in 1697 was surrendered to France. The French initiated the cultivation of the fertile soil, which, together with the increased importation of slaves, laid the foundation for the great production of sugar and cotton.

Haiti abolished slavery before any other country in the world, and this was partly because the slaves themselves revolted.

During the time of the French Revolution in 1789, Haiti was a segregated society of about half a million slaves, 40,000 whites and 25,000 of mixed descent. The slave law, Code Noir, of 1685, had never given the slaves the rights that were officially in force. They were inhumanly exploited and the death rate on the plantations was high. The revolution in the motherland led to extended autonomy for the plantation owners, and people of mixed origin were given the right to vote. In 1791, over 100,000 slaves revolted in the northern part of the colony demanding free citizenship. Under the leadership of, among others, Toussaint Louverture the slaves fought a bitter battle in the following decade against the French, British, Spaniards and mulatto groups. There were also internal struggles between various groups of plantation owners, representatives of the French government and the so-called “free colored”.

In 1801, the Louverture controlled the entire island, but Napoleon Bonaparte intervened with great forces to regain control. Louverture ended up in French captivity where he died in 1803, but his lieutenants Jean-Jacques Dessalines and Henri Christophe took over as leaders. With the help of a yellow fever epidemic, the French were defeated on January 1, 1804. Dessalines proclaimed independence under the old name of Haiti.

After the United States, Haiti was the first country in America to gain its independence. It meant hope for the slave population in other colonies and frightened the plantation owners. Independence was first recognized by France in 1825, after the then President of Haiti, Jean Pierre Boyer, signed an agreement guaranteeing France a substantial compensation for the loss of Haiti as a colony.

Dessalines exclaimed to the emperor and continued the fight against the white upper class in Haiti. However, Dessalines was killed in 1806 after displacing and exterminating almost the entire white population. The country was then ruled by two separate regimes until Jean Pierre Boyer ruled the country in 1820 and in addition conquered Santo Domingo from the Spaniards. The island was united until 1843, when riots in Santo Domingo led to a new division – Haiti and the Dominican Republic.

Tyrannical leaders characterized Haiti throughout the 19th century, and the country was characterized by economic and political chaos. A black upper class grew, while poverty increased among the vast majority of the population. In the period 1843-1915, 22 dictators ruled, and between 1911 and 1915 a total of seven presidents were overthrown. In 1915, US forces intervened in an effort to bring stability. For the next 19 years, Haiti was ruled by a US high commissioner. In 1934, however, the opposition became so strong that the Americans had to retreat. After a period of four years of relatively progressive politics under Dumarsai’s Estimé, in 1950 a military junta took power under the command of Colonel Paul Magloire (1907–2001).

In 1956, Magloire was forced to step down after six years of mismanagement and extensive riots and strikes. He went into exile, and the new military leaders wrote elections that the following year were won following a dubious procedure by village doctor François Duvalier (“Papa Doc”). The black majority had thus gained power in the country, but Duvalier quickly developed an authoritarian stance, and politics has now spread like pure palace intrigues and conspiracies.

Duvalier was reelected in the ensuing elections, which sparked protests far beyond Haiti. The freedom of the Church was considerably limited. The president created his private army, Tonton Macoute, who soon feared the killing of oppositionists and others who stood in the way of Papa Doc’s monarchy. The United States withdrew its support for the country in 1963 in protest of the political abuse of power and the fear of a complete uprising.

In 1964, Papa Doc proclaimed himself a lifetime president. Intellectuals and business people left in large numbers of Haiti, which had developed into by far the poorest country in Latin America. Large numbers of Haitians fled from the terrorist regime to neighboring countries where their labor was grossly exploited. Regular slave trade has been revealed several times.

Papa Doc’s death in 1971 did not end the monarchy; son Jean-Claude Duvalier (“Baby Doc”) was proclaimed president for a lifetime. The hope that the brutality would be moderated was put to shame. The United States trained a new elite army (the “Leopards”) who perfected oppression, while Tonton Macoute stayed more in the background. Due to the extremely low level of wages in Haiti, in the 1970s persistent attempts were made to lure foreign investors to the country. Towards the end of the 1970s, direct US aid accounted for more than half of Haiti’s state budget; a significant portion of the funds found their way directly to the Duvalier family.

A cautious opening of the 1977 dictatorship was followed by open opposition and guerrilla actions. Tonton Macoute again became very active and the old regime was re-established. Social conditions continued to deteriorate, political murders characterized everyday life, and many sought to reach the United States as boat refugees. In 1982, exile Haitians attempted a failed military landing. In the early 1980s, Haiti developed into a kind of free-trade state and attracted numerous American companies in the quest to create “Caribbean Taiwan”. This became even more relevant with the Ronald Reagan Government’s Caribbean Basin Initiative in 1984. Nevertheless, Haiti was experiencing a continuing economic deterioration. Several people lost their lives in 1984 during riots due to high food prices.

In 1985, a referendum was held that consolidated Baby Doc’s lifetime presidency and gave him the right to nominate his successor. Towards the end of 1985, an extensive wave of protests occurred in Gonaïves, with subsequent violent repression. The United States demanded political reform. But the rebellion escalated, and in February 1986 Baby Doc was forced to leave the country with American assistance; he went into exile to France. A National Council (CNG), led by General Henri Namphy, took power with the promise of organizing elections in 1987, with the participation of hitherto banned parties.

Free elections and a new bargain

After a turbulent period of military presidents, riots, parodic and violent elections, the first free elections in Haiti’s history were held in December 1990. The priest Jean-Bertrand Aristide received as much as 70 percent of the vote and took great zeal for the task of creating order in the chaos. Aristide was already in trouble at the deployment when his rival Roger Lafontant attempted a military coup without obtaining sufficient support in the army. In September 1991, Aristide was deposed in a military coup led by General Raoul Cédras. Parliament appointed aging Supreme Court Judge Joseph Nerette as president, while Aristide fled to the United States in exile.

The Organization of American States (OAS) and the United States imposed financial sanctions on Haiti and tried unsuccessfully to obtain recognition of Aristide as the only legitimate president. Financial assistance of 750 million dollar was withheld by the United States, Canada and the EU. The effects of the sanctions affected especially the already poor population; The result was an increasing flow of boat refugees to the United States. Haiti’s elite and military authorities took care of the little that remained of the country’s economy and sped on drug trafficking.

The demand for Aristide to return became increasingly burdensome in Haiti where riots, violence and repression increased. The UN warned Cédras that the country would be invaded if he did not voluntarily relinquish power. In September 1994, a UN force of 20,000 men under US command entered the country.

The invasion forces met little resistance. The army surrendered shortly afterwards and was disarmed and replaced by a temporary UN police force. Cédras had to realize that the battle was lost and went to Panama in exile. A few days later, Aristide arrived in triumph to the capital Port-au-Prince, and the situation quickly calmed down under the oversight of UN forces. Aristide, who referred to himself as a socialist when he was elected, now relied on a completely different policy to satisfy the World Bank and the United States. The country’s economy regained growth, inflation was reduced, business began to function again, and privatization was implemented. The UN withdrew 60 percent of its forces in 1995, after a new police force was trained. The 1995 parliamentary election was won by Aristides party Lavalas; however, the election was criticized for being unruly.

Formally, Aristide’s five-year term was almost over, and the constitution did not accept re-election. René Préval of the populist coalition Organization Politique Lavalas (OPL) won the election in December 1995 with 88 percent of the vote. For the first time in the country’s history, an elected president entrusted the office of an elected successor. The political situation was then relatively calm. In the spring of 2000, the last contingent of US soldiers was withdrawn.

After Préval was elected president in 1996, the country has been characterized by political turmoil and divisions in the ruling party. Prime Minister Rosny Smarth was criticized by the population for the large-scale privatization program and cuts in government spending imposed by the IMF, and in October 1997 he was forced to leave the ministerial post. The National Assembly refused to approve President Préval’s proposal for prime ministerial candidates, and the country was without a capable government and was almost in a political vacuum. In January 1999, the president dissolved equally well throughout the National Assembly, and on March 25, the country got its first government in 21 months when Préval appointed a new government with Jacques-Édouard Alexis as prime minister. Preval served as president until 2001.

History of Haiti
Tagged on: Haiti