Central America was populated by paleoindian hunters as early as 9000 BC Domestication in Central America of maize and other crops about 5000 BC led to a rapid increase in the population and establishment of agricultural villages; about 2000 BC had the foundation for higher civilization established.

At Copán in western Honduras, the Mayan people built a political and religious city with richly-decorated buildings and erected stables with inscriptions with historical information. During classical times (300–900 AD), the city was a center of astronomy.

In the Ulúa Valley, fine marble vessels were made, an item category not only appreciated in the Mayan area. A central Mexican influence can be discerned in parts of the Mayan area. 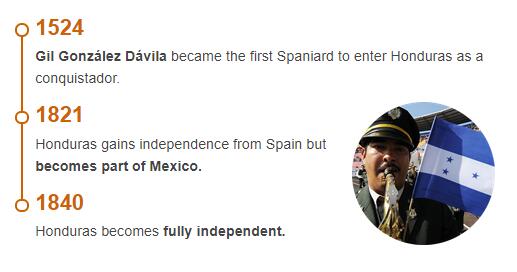 Honduras Atlantic Coast was sighted by Europeans in 1502 during the fourth and final voyage of Christopher Columbus. To see more information other than history, please visit Abbreviationfinder to learn more about climate, population, government, and economy for the country of Honduras. The Spanish conquest of Honduras began in the 1520s, but the resistance of the Indians continued into the 1600s. Honduras was ruled from Guatemala during colonial times. The wrestling with Spain came in connection with the Viceroy of New Spain’s Declaration of Independence in 1821. Honduras became part of the newly formed Central American Union in 1823. Violent conflicts led to the disintegration of the Union in the 1830s, and Honduras became an independent state in 1838. Conservative and liberal politicians continued to fight for power over the republic. In several cases, these conflicts also drew in neighboring republics.

The banana cultivation came to dominate the country’s economy from the end of the 19th century, with the North American company United Fruit Co. gained a decisive influence. Between 1933 and 1948 Honduras was ruled by the leader of the National Party (PNH), General Tiburcio Carías Andino, and the party retained power until the mid-1950s. A cautious reform effort was initiated in 1957 by President Ramón Villeda Morales, but stopped following a military coup in 1963. The coup leader Oswaldo López Arellano ruled until 1971 and 1972-75. In 1969, Honduras suffered defeat in the football war against El Salvador. The most serious consequence of the war was that the economic integration process initiated by Central America had ceased in 1960.

Due to a scandal, López was forced to resign in 1975 and was replaced by reform-friendly Colonel Juan Alberto Melgar Castro. However, this was deposited in 1978 in a coup led by General Policarpo Paz. Honduras was increasingly drawn into the Nicaraguan conflict and became the United States’ most important military focal point in the region (compare Contras). Under strong American pressure, Honduras in the 1980s initiated a process of democratization led by civilian presidents, first Liberals Roberto Suazo and José Azcona, then PNH leader Rafael Callejas.

In 1994, Liberal Carlos Roberto Reina took over as president. He sought to reduce the power the army gained in the United States in the war against the Sandinists in Nicaragua. Among other things, the mandatory military duty was abolished, and a civilian controlled police force was established. Reina advocated “moral revolution” against corruption and poverty, and all subsequent presidents have also paid close attention to law enforcement. His successor in the 1998–2002 presidential post, Carlos Roberto Flores, continued to limit the military’s political influence, appointing, among other things, a civilian defense minister.

In 1998, Central America and Honduras were hit hard by Hurricane Mitch. About 6,000 people were killed and hundreds of thousands became homeless while destroying much of the country’s infrastructure. President Flores talked about the hurricane wiping out “50 years of development” in 48 hours. The destroyed infrastructure and the damage to the country’s most important source of income, cultivation of bananas and pineapple, were estimated to correspond to around 95 percent of the country’s GDP, leaving deep traces in the country’s economy.

In 2006, landlord Manuel Zelaya from the Liberal Party took office as president. He initially pursued a traditional policy, but soon became radicalized. He focused on social reforms and made contacts with Venezuela’s President Hugo Chávez. Zelaya’s policies led to protests from the country’s traditional elite and when the president tried to organize an advisory referendum to change the constitution, the military refused to help with the transportation of ballot boxes. Zelaya then dismissed the commander, after which the Minister of Defense and the entire military command resigned. Parliament and the Supreme Court claimed that the president exceeded his powers, and on the day of the June 2009 referendum, soldiers stormed the president’s home and forced Zelaya to leave the country. The army claimed that they were acting on orders of the Supreme Court, and Parliament appointed President Roberto Micheletti the same dayto the interim president. Although Parliament, the Army and the Supreme Court believed that they acted in accordance with the Constitution, the provision was stamped as a coup d’état by the outside world and Honduras was excluded from the American cooperative organization OAS.

In November 2009, a new election was held where Zelaya was not allowed to stand, and the deposed president called for a boycott of his exile. The election was won by Porfiro Lobo Sosa of the National Party, who immediately introduced an amnesty for political crimes in connection with the coup.

In 2011, all charges against Zelaya were dropped and he was able to return to Honduras where he formed a new party called Libre (‘Freedom’). The Truth Commission set up to investigate events related to Zelaya’s deposition concluded that it was a coup d’etat and that the military was responsible for the murder of 20 people who objected to their actions. Later that year, however, the Supreme Court ruled that the deposition could not be classed as a coup, and several generals who were prosecuted for their involvement in the deposition of Zelaya were acquitted. The various interpretations of the events created great tension in the country, which was shaken by a number of violent confrontations. During the 2013 election campaign, some 30 politicians were murdered. The presidential election was won by Juan Orlando Hernándezfrom the National Party. Libre became the second largest party in the parliamentary elections that year and two other new parties, the Anti-Corruption Party (PAC) and the Social Democratic Pinu, also entered the parliament.

During Hernández’s first year as president, the number of homicides dropped to 66 homicides per 100,000 residents from the previous top level 89 homicides per 100,000 residents. The president received international support to continue fighting criminal gangs. The donors also demanded that the government attack the corruption in the state administration and the political system. The ambition was to establish a commission that, with foreign support, would help local authorities to investigate corruption charges. Hernández disagreed with the proposal.

After the 2016 constitutional amendment, which enabled the re-election of the president, Juan Orlando Hernández was able to re-run for office. He won the subsequent election in 2017, making his second term as Honduran president. The president’s political program consists of a continued fight against the violence as well as financial initiatives to make Honduras a regional center for IT and logistics.

History of Honduras
Tagged on: Honduras