Indonesia’s many islands include a variety of ecological environments, which have characterized both prehistoric and historical times. The large variations in sea level during the Pleistocene period have sometimes facilitated immigration to the islands and sometimes made it more difficult. Archaeological research on Indonesia is still in its beginnings and uncertainties are great.

Most finds in Java of Homo erectus date from most to 1-1.5 million years. No stone artifacts have so far been able to be associated with the Java man; probably dated stone implements are perhaps 50,000 years old and are associated with finds of Homo sapiens. The area’s best known settlements, at Borneo, Palawan (belongs to the Philippines) and Sulawesi are between 40,000 and 5,000 years old and belonged to the Australian wadjak people, who were hunters and gatherers. At one of the sites, the Niah caves at Borneo, graves from the latter part of the period were also found.

From about 3000 BC people from southern China, Taiwan and the Philippines spread over Indonesia and grain cultivation, mainly rice, was introduced. During the next millennium, a transition was made to an ecologically better suited cultivation of garden plants. During the Iron Age and the early historical period, more durable varieties of rice spread. Bronze metallurgy occurred during the first millennium BC, but stone axes were used until iron utensils became common through the mediation of Indian merchants during the centuries AD. 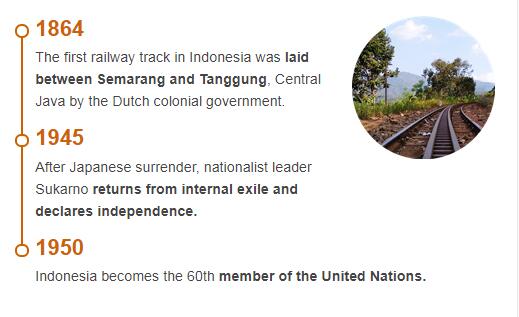 Indonesia’s history has been characterized by three major civilizational traditions, the Indian, the Islamic and the European, stored on top of its own Malay. The long-distance trade across the Indian Ocean, where Indonesia occupies a key position on the road between Europe-Middle East and China, explains the external influences that have affected Indonesia’s history. To see more information other than history, please visit Abbreviationfinder to learn more about climate, population, government, and economy for the country of Indonesia. The first of these came from the Indian continent in the form of Hindu and Buddhist social thinking, which, among other things, set its mark on the early state formation process.

At least by the middle of the 400s AD there were smaller state formations in the Archipelago Act. The following more than a thousand years of history are characterized by attempts to unite the many petty kingdoms into larger states. Local and regional princes and dynasties competed for power, intrigued and manipulated in a struggle to control as large sections of the population as possible. The Srivijaya kingdom on Sumatra (c. 680-1080) and the Majapahit kingdom on Java (1293-1527) had recognized supremacy over much of the island world.

After the Indian influence came Islam. This occurred in connection with the trade boom during the 1300s and 1400s along the Indian Ocean seaways. Aceh province in northern Sumatra converted in the late 13th century. The Islamization of Java took place centuries later and was largely just a varnish on top of older animistic, Hindu and Buddhist conceptions. After Islam came the Europeans. Portuguese ships entered Malacca in 1511. During the rest of the 16th century, the Portuguese traded, fought and tried to mission. But they were just one of many groups that fought for power, money and beliefs in the archipelago.

The first Dutch ship arrived in 1596. In 1602, the Dutch East India Company was formed, which in 1619 built the trading station Batavia, now Jakarta, on the northwest coast of Java. In 1641, Malacka was conquered. Profitable trade demanded monopoly. The company got rid of European and local competitors, played out the archipelago princes against each other and established itself during the 18th century as a new central power on top of existing state formations. Merchandise could now be procured by fiscal means. The company had grown into a great power, and in 1799 its possessions were taken over by the Dutch state.

A period of temporary British supremacy in 1811-16 had considerable consequences for colonial rule. Now the real colonial era began. The last remnants of resistance in Java were crushed in the bloody Java War of 1825-30. Subsequently, other parts of the archipelago were placed under colonial rule. Shortly after 1900, all of today’s Indonesia was under Dutch supremacy.

The purpose was one: to make the colony profitable for the motherland. Systematic forced cultivation of sugar, coffee, tea and indigo in Java in the years 1830-70 under state monopoly (the so-called cultural system) gave the Dutch crown big profits. The economy was deregulated in 1870. Privately owned European plantations, which utilized cheap land and labor, were built at a rapid pace, not least at Sumatra. Investments were made in transport and infrastructure. Tin and coal mines were constructed; oil recovery and logging started. The development favored economically strong groups among the natives. The underclass, which lacked soil, got worse.

The Dutch tried to replace the old bureaucracy-based personal power exercise with a regulated management of European incisions. Europeans took over at lower levels of government. After the turn of the 1900s, new social areas became subject to state regulation. By 1850, there were 22,000 Europeans in the colony, by 1930 their number had increased to 250,000. This new system of management was the tool that, for the first time in history, was able to create a centralized, cohesive state.

The new, colonial state required educated natives. These came into contact with the western world, but colonial racism prevented them from realizing their ambitions. The political principles established in Europe in connection with the democratic breakthrough were not applied in the colony. The result was anti-colonial currents. During the 1910s, large, popularly rooted political organizations saw the light of day. Despite different ideologies, the basic requirement was the same: freedom from the Netherlands. Following a communist-inspired uprising attempt in 1926-27, all mass-oriented political activities were banned.

The independence movement was weak when the Japanese occupied the country in March 1942 and showed that the colonial masters were not invincible. Natives were promoted to higher positions to replace interned Dutch. The brutality of Japan and the hardships of the war economy created led to nationalism rapidly growing in strength. When Japan surrendered, Indonesia’s independence was proclaimed by nationalist leader Sukarno on August 17, 1945, today the country’s national day. In the following years, a bitter political and military struggle was fought with the Dutch, before independence was reached in December 1949.

During the 1950s, the new state attempted to copy a Western regime. But the political power of action was weak. At the end of the decade, three main political actors were crystallized: the Communist Party (Partai Komunis Indonesia, PKI), the army and President Sukarno. PKI mobilized farmers and workers and became a mass party with millions of members. The army strengthened its position by defeating separatist insurgency in the islands off Java and gaining an economic key position when officers took over the management of nationalized Dutch companies. The conflicts between the army and the PKI made Sukarno a political watchman.

Land reform was enacted in 1959-60, but its implementation met resistance. Communist peasant organizations carried out land occupations. PKI mobilized the workers in the companies controlled by the army. During the first half of the 1960s, Sukarno and PKI represented an increasingly anti-capitalist and anti-imperialist line, the army a pro-capitalist, which required support around the United States and Western Europe. The tensions were triggered in October 1965 when a coup attempt was defeated under the leadership of General Suharto. The army, probably wrongly, accused the PKI of lying behind. The party was banned, and a bloody massacre followed party members and alleged sympathizers, which may have claimed as many as one million dead. Another hundreds of thousands were interned and released only in the late 1970s.

The destruction of PKI meant that Sukarno lost his waver role. General Suharto took power with the support of the military, bureaucracy and parts of the Islamic establishment. The new regime created political stability during the 1970s and 1980s and built up a powerful state apparatus. A capitalist development policy was pursued and significant industrialization took place. Productivity in rice farming increased sharply, so that despite a sharp increase in population, the country became self-sufficient in rice, the basic food of all Indonesians. Class differences increased. A new, urban middle class emerged and took its place within the growing state bureaucracy but also within private enterprise.

The prize for rapid economic development was an authoritarian regime, an almost non-existent space for political opposition and widespread corruption, which eventually undermined political stability. When the financial crisis broke out in East Asia in the summer of 1997, Suharto was severely criticized for his authoritarian governance. A great dissatisfaction with corruption and sly policies led to demands for the immediate resignation of the government. After ten days of street fighting, riots and looting, Suharto resigned in May 1998, and his loyal Vice President, Bacharuddin Jussuf Habibie, took over the presidency. Free elections were held in June 1999 and took the country a first step away from the dictatorship.

The Suharto Party Golkar’s power monopoly was broken, but the military retained a number of seats in the parliament until 2004, when the president was also directly elected by the people for the first time.

The breakthrough of democracy

During the first two presidents after democratization, the country’s economic and political problems existed. The reform work was slow and no noticeable progress was made in the fight against corruption. Muslim leader Abdurrahman Wahid, who was elected president in 1999, was deposed in 2001 for incompetence and succeeded by Vice President Megawati Sukarnoputri. She was the daughter of the first President Sukarno and had been one of the front figures during the rebellion against Suharto. As head of state, however, she failed to live up to expectations and was voted off in the 2004 election.

The abolition of totalitarian state power led to previously suppressed forces being released. Separatist uprisings and religious strife erupted in several places. Gerillan Gerakan Aceh Merdeka (‘The Movement for a Free Aceh’, GAM) had been fighting for the independence of the province of Aceh since the 1970s, but intensified its struggle when East Timor in 1999 voted for its independence. GAM’s management was in exile in Sweden. In Irian Jaya (since 2001 Papua) in New Guinea, Organisasi Papua Merdeka (‘Organization for a Free Papua’, OPM) demanded release from Indonesia.

In the Moluccan archipelago there were bloody confrontations between Muslims and Christians. The country also had problems with Islamist terrorism. In October 2002, 202 people, including six Swedes, were killed in the blast attacks on the tourist island of Bali, carried out by extremist movement Jemaa Islamiyya (JI), who swore allegiance to al-Qaeda.

As a result of an intense fight against Islamic extremism, Indonesia has been spared from several large-scale terrorist attacks. A number of minor attacks occurred during the 2010s, most of them by groups affiliated with the Islamic State. The attacks were primarily aimed at government institutions such as police stations. In May 2018, however, suicide bombers attacked three churches in Surabaya.

Following the election of former General Susilo Bambang Yudhoyono as president in 2004, both economic progress and political stabilization have taken place, especially since his own party Partai Democrat (the “Democratic Party”, PD) gained a majority position in parliament in 2009. In Aceh, a peace agreement 2005, accelerated by the need for joint efforts across ideological boundaries following the December 2004 flood wave disaster.

In May 2006, nearly 6,000 people died in an earthquake in Yogyakarta in central Java, and in September 2018 an earthquake with subsequent tsunami killed about 4,500 people in Palu and Donggala in northern Sulawesi.

Democracy stability was confirmed in 2014 when Joko Widodo, with no links to the country’s power elite, was elected president with 53 percent of the vote in battle with former general Prabowo Subianto (born 1951). In the parliamentary elections that year, the Indonesian Democratic Fighting Party (Partai Demokrasi Indonesia Perjuangan, PDI-P), which supported Widodo in the presidential election, became the largest party. Widodo was re-elected in 2019 with 56 percent of the vote.

Political stability, coupled with sustained economic growth, has given way to a number of reforms in the health and education fields, which together offer a certain social protection network.

History of Indonesia
Tagged on: Indonesia