Kazakhstan’s history extends back to the Khasaki khanate, a loose association of autonomous tribes united under a common khan. In 1731 the area was incorporated in Russia. After the Russian revolution in 1917, Kazakhstan became part of the Soviet Union, as a separate Soviet republic from 1920. When the Soviet Union disintegrated in 1991, the country became independent. 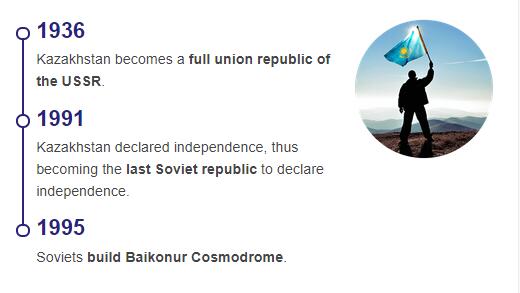 The people in the area that today make up Kazakhstan, the Kazakhs, have traditionally been a nomadic people without scriptural culture, and there are few written sources about their oldest history.

People have lived in the area that is today Kazakhstan since the Stone Age. The nomadic peoples of the Saka and Huns appeared between the year 500 BCE. and 500 AD The first state, or at least state-like entity, created in the area was the Turkish khaganate (also called the Göktürk khaganate). There are traces of the khagan dating back to the 500s.

In the 13th century, the area was conquered by Genghis Khan and the Mongols. When the Mongol Empire was divided in the 1240s, the area became part of the Golden Horde.

Kazakhs speak a Turkish language, but also have strong Mongolian features in their culture. They were converted to Islam as early as the 1300s, but for many centuries their knowledge of Muslim traditions was rather superficial. It was only towards the end of the 18th century that Islam gained a proper foothold as a result of Tatar missionary activity. To see more information other than history, please visit AbbreviationFinder for geography, history, society, politics, and economy of Kazakhstan.

A Kazakh khanate was created in the mid-1400s as a federation of a number of ethnically very different tribes. The core areas of the Khanate were south of Lake Balkhash and along the Chu and Talas rivers. Gradually, Kazakh tribes began to migrate further north towards the Irtysh and Ural rivers in search of pasture for their cattle herds.

Around the middle of the 16th century, the khanate was divided into three tribal federations or “hordes” – the big, middle and small zhuz. These were at times ruled by the same khan, and at other times by their own leaders. In any case, the Khan and the Kazakh nobility (often called “the white leg”) had little power. The individual tribes and families were self-governing in all internal affairs.

At the beginning of the 18th century, the Kazakhs were threatened by the Mongolian Zhongs, who had established a powerful khanate in southern Siberia. In order to resist this pressure, the two northernmost Zhuz, the small and the middle, sought protection from the Russian tsar power in 1731 and 1740, respectively..

The Kazakh tribal communities were characterized by internal feuds. Last year, the tribes often invaded each other’s territories, stole cattle from one another and attacked trading caravans. To keep them under control, the Russian authorities built fortresses against the steppes, which were largely manned by Cossacks. However, they acknowledged that the unrest among the Kazakhs was often due to sheer distress, and in 1801 some Kazakh tribes allowed new grazing lands on Russian territory west of the Ural River. Here the “inner horde” was established.

In 1822, the northern khanates were dissolved and the Kazakh territories under regular Russian rule. Russian statesman Mikhail Speransky drafted a new administration rule for the “Kyrgyz” steppe (at this time and a hundred years on, the Kazakhs were referred to as Kyrgyz). Several Kazakh revolts against the Russian government were fought, the most extensive in 1835.

In the 1860s, the southern great Zhuz was also conquered by Tsar Russia. Towards the end of the century, more and more land-hungry Russian farmers migrated into Kazakh territory and often seized the best soil. By the outbreak of the First World War, Kazakhstan had over one million Slavic inhabitants. In 1916, the exasperation of the Kazakhs culminated in a major uprising as the Tsar attempted to deport troops from all over Central Asia for war service.

Parts of the Kazakh upper class had gradually begun to build houses in Russian fashion, and sent their sons to Russia for education. This laid the foundation for the emergence of a thin layer of Kazakh intelligentsia. During the Russian Revolution of 1917, a group of Western-oriented Kazakh intellectuals proclaimed an autonomous Kazakh state, Alasj Orda, which supported the Provisional Russian Government against the Bolsheviks. But it only existed for just over two years before the nationalists had to surrender to the Bolsheviks in 1920, and Kazakhstan became its own Soviet republic.

An “Kyrgyz” autonomous Soviet republic was established in 1920 as part of the Russian Federation. In 1936, it was upgraded to the Union Republic under the name Kazakh Union Republic. Stalin’s forced collectivization in the 1930s hit the Kazakhs very hard. Most of them were still nomads or semi-nomads and had their traditional nutritional base destroyed. Perhaps as many as one million Kazakhs died and hundreds of thousands emigrated to China and Mongolia.

After that, Kazakh resistance to Soviet power was broken. The Kazakhs were more generally Russianized and better integrated into Soviet society than the other peoples of Central Asia. Much Soviet industry was added to Kazakhstan, to keep it close to the oil and gas deposits in the Republic.

During and immediately before World War II, over one million Koreans, Germans, Poles, Chechens and some other peoples groups were forced to move to Kazakhstan from various parts of the Soviet Union. In the 1950s, Nikita Khrushchev launched a large-scale campaign to cultivate the so-called “virgin land” in northern Kazakhstan. Kazakh leaders who opposed this campaign were removed. Many hundreds of thousands of Russians and Ukrainians moved into what had previously been the Kazakh’s pasture lands.

As a result of all these demographic changes, the Kazakhs’ share of the total population of Kazakhstan in 1959 dropped to about 30 percent, while the Russians made up 42 percent. Not in any other Soviet republic did the titular population stand so low in numbers. However, the Kazakhs had far higher birth rates than Europeans, and by the 1989 census, the Kazakhs had again become the largest ethnic group.

In the post-war years, Russians and other slaves dominated Kazakh economics and politics. In 1959, however, Kazakh Din Dinukhamed Kunajev was elected First Secretary of the Kazakh Communist Party, and under his leadership, ethnic Kazakhs filled more and more top positions in the state and party apparatus. When Kunajev was elected full member of the Politburo as the first Kazakh in 1971, it was an expression of Kazakhstan’s increasing importance in Soviet economy and social life.

The Kunajev regime was known as very corrupt, and in December 1986 Mikhail Gorbachev recruited an ethnic Russian, Gennady Kolbin, as the new first secretary. This triggered violent demonstrations in Almaty with many dead. Following new unrest in Novyj Uzen on the Mangysjlak Peninsula in June 1989, Kolbin was replaced by Nursultan Nazarbayev, Kazakhstan’s party leader. Since then, Kazakhstan has largely been spared ethnic violence.

In December 1991, just before the Soviet Union disbanded, Nazarbayev was elected president of Kazakhstan. He has since been a dominant figure in Kazakh politics. By a referendum in April 1995, he was allowed to extend his term of office until 2000. At the same time, Kazakhstan’s Supreme Soviet was forcibly dissolved and replaced by a new, smaller national assembly, Madsjilis. The 1995 Constitution gives the president very wide powers.