Kenya’s archeology is one of the continent’s richest and best explored. Findings from very early settlements have been found in connection with geological fracture systems (compare Great Rift Valley). The pioneering work begun by Louis and Mary Leakey in the early 1930s has been followed by a series of studies that have clarified Kenya’s Stone Age periods, which date back to the Holocene (post-glacial) era and some 3 million years back.

Early agricultural production, especially around the present Lake Turkana, has been demonstrated from around 2500 BC. The use of iron spread through Kenya at the time of Kr.f. From about 900 AD Kenya’s coastal country was the center of a domestic, urbanized Swahili culture, whose trade contacts include. extended over the western part of the Indian Ocean. 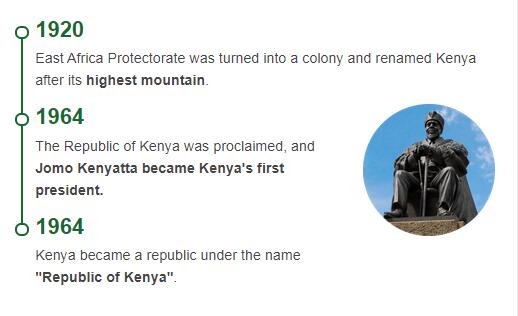 The present Kenya became an early meeting place for immigrant Bantu people, Nilots, Nilohamites and Kushites. The hinterland was unknown outside Kenya until the 19th century, while the coastal areas have been known through the centuries for their trade relations with, among other things. southern Arabia. To see more information other than history, please visit AbbreviationFinder for geography, history, society, politics, and economy of Kenya. Ivory and slaves were the most important commodities on the caravan route between Lake Victoria and Mombasa. Trade strengthened, among other things. the political power of Luo on Lake Victoria, and in the east, even kikuyu could benefit from the caravan trade and expand north, west and south. There they were stopped by the livestock massagers, who by the mid-18th century had immigrated north from central Kenya. From the mid-19th century, Arab and Swahili-speaking peoples took over the trade routes, and trade was controlled by the Sultan of Zanzibar.

As the first Europeans in the country, German missionaries appeared in the early 1800s, but in 1888 the British trading company East Africa Company began acquiring territories in Kenya. The British declared Kenya a British protectorate in 1895 and began building railways between Mombasa and Uganda the same year. In 1897, European settlers were granted the right to land that was not farmed or inhabited by Africans. Later, the British promoted the European settlement, especially in Kenya’s highlands, by take land from Africans and give to Europeans, who grew export crops such as coffee, cotton and wheat with the help of African labor. The Africans protested violently, not least the masses and the kikuyu, who went on armed attacks against the European settlements. In 1920 Kenya became a British crown colony.Kikuyu Central Association was founded. In 1929, Jomo Kenyatta traveled to the United Kingdom to speak for the rights of indigenous peoples, but without success because of the great influence of European settlers on the administration of the colony.

World War II benefited European farmers and plantation owners, while many Africans, forced into marginal agricultural lands, had to abandon their barren lands in order to seek employment in cities or plantations in vain. Discontent grew, and from 1950 a guerrilla movement began to emerge, the so-called Mau-Mau movement, which fought for the rights of Africans to the earth. In October 1952, the colonial administration introduced a state of emergency, and for the next four years it was at war with, above all, the kikuyu, which dominated the Mau-Mau movement. About 13,000 Africans, most of them Kikuyu, were killed during the uprising, of which 2,000 civilians, while only 32 European civilians were killed. During the uprising, Kenyatta was imprisoned, and all political activity was banned until 1955. The state of emergency was first lifted in January 1960.

In 1957, for the first time, the African people were given the opportunity to elect representatives to the Legislative Assembly, and in 1960 the Kenya African National Union (KANU) was formed. Kenyatta was elected leader of KANU, which won the 1961 election and then formed a coalition with the smaller Kenya African Democratic Union (KADU). KANU won an overwhelming victory at the 1963 regional elections, and Kenyatta became prime minister that year. Kenya was declared independent on December 12, 1963, and the following year the country was declared a republic with Kenyatta as the country’s first president. KADU had then gone up in KANU, and thus Kenya had in effect become a one-party state.

Economically, independent Kenya achieved some successes, but the government’s west-friendly policy left no room for critical votes. Attempted insurgency attempts in 1964 with the help of British troops, and Kenya signed a defense agreement with the United Kingdom that year. In 1966, Vice President Oginga Odinga left KANU and formed his own Kenya People’s Union (KPU), which was, however, banned in 1969. The same year, Odinga was arrested, and Finance and Planning Minister Tom Mboya was murdered. Throughout the 1970s, Kenyatta’s sovereignty increased, and the country was practically ruled by a click of close friends and family members to the president.

Kenyatta died in 1978 at the age of 82, and new president became former Vice President Daniel arap Moi. Hopes for a more liberal political climate were not met, and criticism of the regime grew. A coup attempt in 1982 was beaten down and followed by extensive arrests and several death sentences. According to a constitutional supplement in 1982, Kenya became de facto one-party state with KANU as the only permitted party. Presidential candidates and candidates for the National Assembly must be members of KANU.

In the early 1990s, the political debate in Kenya was characterized by ever stronger demands on multi-party systems. Democratization requirements and foreign pressures, including from the World Bank, in December 1991 led to KANU deciding to allow several parties. The Forum for the Restoration of Democracy (FORD), founded by Oginga Odinga, was registered as a party and tried to keep a united front against KANU and the president. Already in January 1992, the opposition was divided by Mwai Kibaki forming the Democratic Party(DP), and soon more lots had been registered. Developments in the 1990s went towards increased political pluralism, but were also marked by increasing ethnic and religious contradictions. In 1992, at least 2,000 people were killed and 20,000 became homeless at ethnic clashes in western Kenya. The opposition accused the government of instigating the unrest with the idea of ​​discrediting the multi-party system.

The initiatives taken at the end of the 1990s to reform the state administration and fight corruption did not produce any tangible results, and in the early 2000s Kenya was close to an economic collapse. In 2001, Kenya got its first coalition government, after Moi entered into a settlement with Raila Odinga (son of Oginga Odinga who died in 1994), leader of the National Development Party(NDP), who was appointed Minister of Energy. Both the cooperation with the former opponent Odinga, from the Luo people’s group, and the appointment of Uhuru Kenyatta (kikuyu, and son of the first president) to the prime minister were regarded as attempts by Moi to improve relations with the dominant peoples before their approaching departure. The NDP was dissolved shortly thereafter and was in KANU. When in August 2002, Moi recommended that KANU nominate Kenyatta as its presidential candidate, the newly won consensus broke. Both Odinga and several other leading KANU members left the party and joined the valaliance that a dozen opposition parties have just entered into. The new opposition front took on the name of the National Rainbow Coalition(NARC). DP leader Mwai Kibaki was named NARC presidential candidate and received just over 62% of the vote in the December election, against just 31% for Uhuru Kenyatta. In the parliamentary elections conducted simultaneously, NARC received 125 of the 210 directly elected seats.

The change of power was met with great enthusiasm, also in the outside world, and the donors resumed the support, which in most cases had been frozen for several years. However, the high hopes were not met, and donors also expressed strong concern that the fight against corruption did not produce any noticeable results.

The contradictions within the broad government coalition, which reminded itself early, increased when a proposal for a new constitution presented in 2005 suggested a continued strong presidential office. The constitution was rejected in a referendum, and critics within the coalition were dismissed. The government was divided, and before the 2007 general elections, both President Kibaki and Raila Odinga, now opposition leaders, profiled themselves through new parties. The electoral movement was conducted in a toughening political climate, and when Kibaki was proclaimed victorious on dubious grounds and quickly resigned to office, severe unrest erupted. In late December 2007 and January 2008, up to 1,500 people were killed, and perhaps as many as 600,000 were driven away from their homes in well-organized forms that carried clear features of ethnic cleansing. After mediation by the UN: s former Secretary General Kofi Annan formed a new unity government with Odinga as prime minister. A domestic investigation showed that high-ranking politicians and businessmen, primarily among the kikuyu and luo groups, had ignited the unrest. After Parliament rejected his request to set up a special court to investigate those responsible, Annan submitted a naming list to the International Criminal Court (ICC) in The Hague, which in March 2010 gave preliminary investigations to the main suspects, including top politicians Uhuru Kenyatta and William Samoei Ruto.

In August 2010, through a referendum, a new constitution was adopted which, among other things. diminishes the power of the president. An upper house, Senate, is created, and the new two-chamber parliament will be able to put the president before the national court. A Supreme Court with the power to review disputes over presidential elections was also established.

Kenyatta and Ruto, former political rivals, collaborated before the March 2013 elections and formed the party alliance The Jubilee Coalition, which prevailed in the parliamentary elections. More controversial, given that both were prosecuted at the ICC, was that Kenyatta stood in the presidential election with Ruto as vice presidential candidate. Despite this, Kenyatta ended up as the winner after winning just over 50% of the vote in the first round. Odinga, who got the second most votes, appealed the result but accepted the same after the Supreme Court ruled that Kenyatta won fairly.

In 2011, Kenyan soldiers entered Somalia to fight the Islamist militia al-Shabab, which conducted several attacks in Kenya. The operation, which formally became part of the African Union peacekeeping force AMISOM in 2012, helped push back al-Shabab and, by extension, the Somali government was able to take control of large parts of Somalia.

History of Kenya
Tagged on: Kenya