The first people to settle on the islands of present-day Kiribati probably came from the west around the third millennium BC. However, the main stream of immigrants came from the area around Samoa in the 13th century AD.

The population was eventually organized into small communities that could include several islands, led by a chief. The Gilbert Islands were the only archipelago in Micronesia where the social order was not strongly influenced by a matrilinear family structure.

The first Europeans in the area were probably Spanish seafarers in the 16th and 16th centuries, but officially known only after a visit in 1765 by British Admiral John Byron (Lord Byron’s grandfather). The archipelago was named after a later visitor, Thomas Gilbert, a British adventurer who settled in the area in 1788. The name “Kiribati” is believed to be the way of the locals to pronounce Gilbert.

James Cook discovered Kiritimati (Christmas Island “Christmas Island”), which was named after the day he landed: December 24, 1777. The first Christian missionaries settled on the islands in 1857. To see more information other than history, please visit Abbreviationfinder to learn more about climate, population, government, and economy for the country of Kiribati.

In the latter half of the 19th century, both Protestant and Catholic missionaries arrived, and Christianity was established. At the same time, whalers used several of the islands as a base during sperm whaling; this business was greatly reduced after 1870. 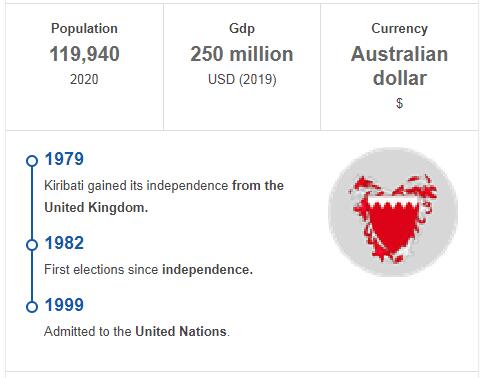 Britain began to formally annex the various islands in the 1880s, and in 1892 the area (along with the Ellis Islands) was made British Protectorate; at the request of the native population, crown colony status was granted in 1915. The islands in the northern part of the Line Islands were incorporated into the crown colony during and after World War I, the Phoenix Islands only in 1937 (except the Canton and Enderbury Islands, administered by the United States and the United Kingdom together).

During the Second World War, the Gilbert Islands and Banaba were occupied by the Japanese. Later, the United Kingdom and the United States have used Kiritimati as the operating base for nuclear test blasts; Britain blew up its first hydrogen bomb here in 1957.

Large phosphate discoveries were made at Banaba, but the development did not start until 1900. When this activity on the island grew, the population after the Second World War was moved to Rambi, an island in the Fiji group, but they received an annual percentage of phosphate revenue. as replacement.

The Crown Colony gained internal autonomy in 1971, but in 1975 the Ellis Islands were separated as an independent state, Tuvalu. Throughout the 1970s, the desire for independence in the rest of the area also grew, and the new state of Kiribati gained independence on July 12, 1979. By a friendship agreement that same year, the United States formally waived its territorial claims on the Phoenix Islands and the Line Islands, which together make up 14 of the the 33 islands of Kiribati consist of.

Iremia Tabai was the island’s first president from 1979–91. His successor Teatao Teannaki was fielded by a corruption scandal in 1994. Teburoro Tito then sat for president for two terms, but was fielded by distrust on the first day of his third presidential term in 2003. Anote Tong overcame his brother Harry Tong in a new presidential election. In 2003, Tong established diplomatic relations with Taiwan. China reacted promptly with diplomatic breach and dismantling of a Chinese satellite monitoring station on the main island. China stopped all aid, including the construction of a new stadium in the capital. The Kiribat station was by Beijingdesignated as an important factor when the first Chinese were shot into space just a month earlier. However, the station had become the subject of political strife following its opening in 1997, with claims that it had as its main task to follow the US missile attempt on the Pacific Kwajalein atoll.

The highly export-oriented economy, built on phosphate (until 1979) and copra, the dried meat of a coconut, laid the foundation for a rapid modernization process. Schools and health care were expanded according to Western patterns, regular air connections were established to other parts of the Pacific, and a growing number of young people received higher education abroad.

The location has given Kiribati several aerospace engagements. Japan’s Aerospace Directorate (NASDA) established in 2000 a spacecraft landing base at Kiritimati, the former British base for nuclear test explosions. The contract is valid until 2020. As the world’s largest coral atoll, Kiritimati is also being tried as a tourist destination. The international satellite company Sea Launch, where Aker Solutions has a 20 percent stake, has launched communications satellites from a rocket platform in international waters near Kiritimati.

In 1995, Kiribati got the international date line moved east of the easternmost of the islands, the Karolines. Thus, the same date became applicable throughout the vast island kingdom, which had previously been divided into different time zones. In 1999, the Carolines changed their name to Millennium Island (“Millennium Island”) in the hope of attracting tourists.

In 1999 Kiribati joined the UN. The Tito government announced in 2002 that it, along with the Maldives and Tuvalu, would file lawsuits against the United States after Washington refused to sign the Kyoto climate – reduction agreement. Kiribati had been on the UN list of nations most likely to drown in the sea in 1989 if water levels rise as a result of global warming. In 1999, the government announced that rising water levels had completely submerged two unpopulated coral reefs, and that some of Kiribati’s land area had been lost.

Prime Minister Anote Tong has asked countries such as New Zealand and Australia to join a long-term emergency plan for the evacuation and settlement of Kiribati’s population of nearly 100,000. Tong argued that rising water levels could make Kiribati uninhabitable by 2050 if global warming continues in the same pace. He pointed out that the highest point in the widespread island kingdom is only two meters above sea level. Kiribati is also plagued by erosion and the drinking water sources are contaminated by salt water.

Speaking at the United Nations Environment Day in 2008, Tong spoke in New Zealand, followed by talks with New Zealand’s Prime Minister Helen Clark about the contingency plan for moving most of the islanders to other countries. He met representatives of the Australian government in the same matter.

History of Kiribati
Tagged on: Kiribati