Kuwait’s history is closely linked to the country’s strategic location at the heart of the Gulf of Persia, and early as a center for international trade; later as one of the world’s leading oil producers.

The area has been under varying influence and control, but direct precursors to later state formation are linked in particular to the immigration of Arab tribes from the Arabian peninsula in the 17th and 18th centuries. Among these were the al-Sabah family, which founded the dynasty that ruled Kuwait from 1756. The area was formally part of the Ottoman Empire, but with autonomy. The threat of direct rule led to Kuwait’s ruler, Sheikh Mubarak, in 1899 signed a protection agreement with the United Kingdom. After World War I, Kuwait became a British protectorate.

In the 18th century, Kuwait became a center for trade between India, the Horn of Africa and the Arabian Peninsula, as well as Mesopotamia and the Levant. To see more information other than history, please visit Abbreviationfinder to learn more about climate, population, government, and economy for the country of Kuwait. Alongside trade, the economy of the 1920s was dominated by pearl fishing. After World War II, oil exports provided substantial revenues to the country, which enabled early modernization, and laid a good foundation for independence from 1961.

Already in 1938, Iraq claimed Kuwait and the country did not recognize the new state by its independence. Kuwait therefore called for British military protection, until 1971. During the first Gulf War, between Iraq and Iran, Kuwait fully supported Iraq, considering the threat posed by the new regime in Iran as greater. 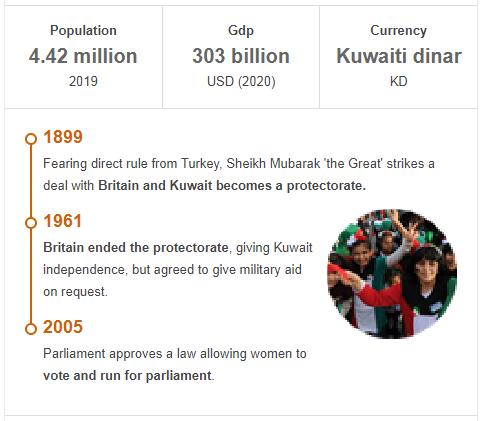 Nevertheless, Iraq reiterated its territorial claims on Kuwait in 1990, invading the country. As a result, a multinational military force was deployed in Operation Desert Storm in 1991, and Kuwait was released in 1991. Norway participated in this operation, and in the subsequent UN observer force (UNIKOM). The tense situation in the region has characterized Kuwait’s foreign policy.

After the war, demands for political liberalization have to some extent emerged, with several elections at a national assembly. However, the emir still sits with widespread power, and the tug-of-war between parliament on the one hand and him and his government on the other has characterized Kuwait’s recent political history. During the Arab Spring, demonstrations also took place in Kuwait, but to a lesser extent than in other countries, such as Bahrain.

After the Arab Spring, the government has still been criticized for, among other things, corruption, and has responded with the arrest of critics. Criticism of the royal family is criminalized.

After the resignation in 2011 by Prime Minister N. al-Mohammed al-Ahmad al-Sabah Nasser, the legislative elections held in February 2012 registered the victory of the opposition Islamist parties, but in June of the same year the Constitutional Court the consultations canceled, reconfirming the Parliament elected in the electoral round of 2009. In October 2012 the Parliament was formally dissolved, the new amendment to the electoral law that lowers the list of preferences that can be expressed from four to one approved and new elections called; held in December 2012, in June of the following year they too were canceled due to the boycott of the opposition and the Parliament dissolved again. The new elections, held in July 2013, saw a drastic defeat of the Shiite minority, which lost more than half of its seats from seventeen to eight, while the Liberals got three and the Sunnis saw their political weight increased from five to seven seats. In October 2016, due to the tensions that arose within government forces following the introduction of some austerity measures to tackle the drop in oil prices, Parliament was dissolved; the legislative elections held the following month with a turnout of 80% recorded the victory of the opposition, represented by the Islamist, nationalist and liberal groups, which, although not winning an absolute majority, obtained 24 out of 50 seats. Since October 2020, the position of emir has been held by N. al-Ahmad al-Jaber al-Sabah.

History of Kuwait
Tagged on: Kuwait