Several Paleolithic cave settlements have been surveyed in the Tian Shan area; Neolithic cave settlements are also known in Kyrgyzstan. During the Bronze Age, the population of the valleys increased. Parts of Kyrgyzstan were minted during the second millennium BC of livestock management groups belonging to the Andronovoculture; in other parts there were local groups with a greater focus on agriculture. This division was reinforced during the Iron Age as a true nomadic culture developed. Northern Kyrgyzstan belonged to the area of things (the Asian shooters). In the centuries before Kr.f. increased cultural influence from the Sogdiana affiliated to the Persian Empire. From Kr.f. included parts of Kyrgyzstan in Kushan. 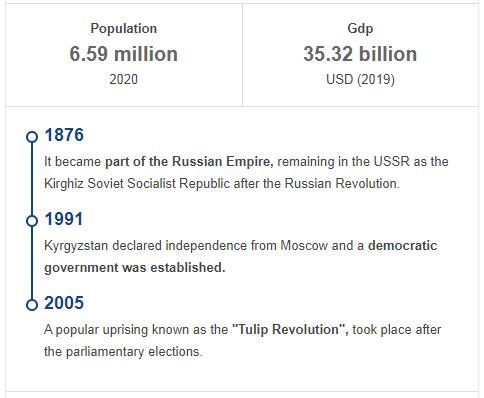 Even pre-Christian sources speak of the Kyrgyz as a nomadic people in the area between the Amu-Darja and Jenisei rivers, but their origins are disputed. The political history of Kyrgyz dates back to the 8th century AD, when they conquered the kingdom of the Uyghurs in present-day Mongolia. They took possession of their present territory north of the Fergana Valley in the 15th century, when Kyrgyz tribes were temporarily united into an independent kingdom. Mostly, however, the divided Kyrgyz were forced to submit to foreign people, such as Mongols, Kalmuck and Kazakhs. The Russians, who came into contact with Kyrgyz tribes in connection with the conquest of Siberia in the 17th century, conquered parts of Kyrgyzstan from the Kokand Khan in the 1860s and incorporated the area into a Turkish-Turkish government in 1867.

The Russian Empire’s lack of interest in ethnic features is evident from the fact that both Kyrgyz and Kazakhs were long under the term “Kyrgyz”, with the only difference being that the former were endowed with the attribute kara ‘the black’. A hard-handed empire regime with a large influx of Russians into Kyrgyzstan and proposals for forced re-enrollment of Kyrgyz to the Russian army led in 1916 to a rebellion that was fought down and followed by mass escape to China. During this so-called Urkun (about ‘exodus’), at least a hundred thousand Kyrgyz perished, according to some sources considerably more. The rebellion flared up again in connection with the October Revolution of 1917.

Kyrgyzstan was included during the first Soviet years in Turkestan autonomous republic, gained 1924 autonomy in the Soviet Republic of Russia (RSFSR) and in 1936 became its own Soviet republic, Kyrgyzstan SSR. The incorporation into the Soviet state meant a social revolution, which in a short time transformed a people of nomadic herdsmen into permanent kolchos farmers and industrial workers. Nevertheless, like other Central Asian republics, Kyrgyzstan remained an economically underdeveloped area, heavily dependent on assistance from more developed parts of the Soviet Union. In 1990 a conflict arose between Uzbek and Kyrgyz farmers over a piece of arable land outside Osj. During the clashes, more than 300 people were killed and more than a thousand people were injured.

In 1990, neither of the two Communist candidates got the necessary majority when Parliament was to appoint a new head of state. Instead, the chairman of the Academy of Sciences was called in as a compromise candidate by Askar Akajev. After Kyrgyzstan declared its independence in August 1991, Akajev was elected president in October by universal suffrage. In the beginning, Akajev won great respect by refusing to accept parliamentary decisions in favor of any ethnic group. Akajev also pushed through a broad privatization program and Kyrgyzstan’s accession to the WTO. However, during his second term in office, which began in 1995, criticism began to emerge against his own business. When Akaiev was criticized in 2002 by a fighting deputy, Azimbek Beknazarov, for a border agreement with China, he was detained in another case. This triggered the so-called Aksymaker.

The country’s democratic development can today be described as almost stopped (2018). In 2017, the Freedom House research institute, which measures political and civil liberties in the countries of the world, changed its classification of post-Soviet Kyrgyzstan from partially free to consolidated authoritarian rule.

Foreign policy, Kyrgyzstan continues to seek good relations with the Russian Federation and joined the Russian-led Eurasian Economic Union in 2015. The Russian Federation still has a military base in Kyrgyzstan and may, by agreement, retain it until 2032. In connection with the military operation in Afghanistan, a US military base was established on the territory of Kyrgyzstan, which was closed in 2014. Kyrgyzstan seeks good relations with the economic superpower of China. The relationship with neighboring states Kazakhstan and Uzbekistan is periodically tense and involves conflicts of interest of an economic, territorial and ethnopolitical nature. Compare Kyrgyzstan (State and Politics).