Judging from the few documented archaeological finds from Laos, its oldest cultures followed the general development of Southeast Asia. In the north, skeletal finds and stone implements suggest that the residents of the Paleolithic (older Stone Age) were an early type of Australians. During the Neolithic (younger Stone Age), local development followed. Prior to the Bronze Age, contacts with the Northeast and Southeast were probably stronger than those with the West, but neolithic finds with parallels in Indian cultures exist.

Bronze Age finds from Laos are late and dated to the centuries closest to BC. In northern Laos, as in Vietnam, there are remains of a megalithic culture linked to Bronze Age finds (compare Krukslätten). However, the archaeological foundation is still too scarce to be able to determine which peoples experience this culture. Included in the period were incipient rice cultivation and animal husbandry, among other things. of oxen and buffalo. At the beginning of the historical period, Laos was probably inhabited by people who spoke monkhmeric languages. According to Chinese sources, the current Laos were included in the kingdom of Funan from the 20th century to the 5th century AD. 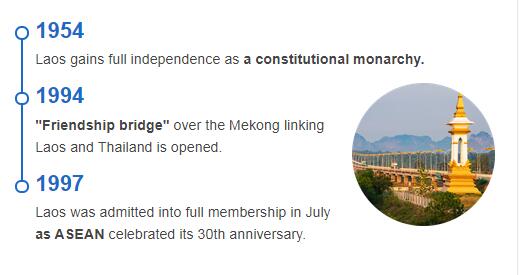 Laos, the smallest, militarily weakest and most economically least developed state on mainland Southeast Asia, is also the least studied by historians. To see more information other than history, please visit Abbreviationfinder to learn more about climate, population, government, and economy for the country of Laos. Today’s boundaries are a consequence of historical coincidence rather than of geopolitical logic. They cut across different groups of people, each with their own history.

The centuries after Kr.f. immigrant Thai people from southern China. This immigration was probably extended between the 800 and the 1100s by the Lao people, whose descendants today make up about 55% of the population and who live in the lowlands. The highlands are inhabited by different, smaller groups of people, who either existed in the area before Lao’s arrival or who later immigrated.

The Lao people became state-bearing during the 13th century. Political and religious centers were developed in Luang Prabang, Xiangkhoang and That Phanom. These were part of the Angkor Empire’s sphere of influence, from which Buddhism was transmitted as a state-bearing religion. The collapse of Angkor in the 1300s enabled the creation of a united Laotian kingdom, Lan Xang. This was founded in 1353 by King Fa Ngum (1353-73), had its headquarters in Luang Prabang and covered most of today’s Laos as well as parts of northeast Thailand. Lan Xang was an important regional power factor during the period 1442-1571, when an original Laotian identity was created, supported by its own form of Buddhism and its own political symbols. Its golden age was in the reign of King Soulignavongsa (1637-94). But the kingdom rested on fragile ground, and the authority of the Luang Prabang dynasty depended on personal ties and changing alliances with local kings and dignitaries. Around 1700, Lan Xang collapsed into three little kingdoms: Luang Prabang, Vientiane and Champassak. In the 1770s, these kingdoms were made into Thai vassal states, and territorial losses continued during the 19th century.

Laos existed as a political entity in that Thailand could not hinder the French expansion westward from Vietnam, conquered in 1859-83. In 1893, Thailand abandoned the area east of the Mekong River, and Laos became part of French Indochina. For the French, Laos was a chip in the game of Thailand, but their plans were halted by the second colonial power in the area, Britain. This allowed Thailand to maintain its independence, and since Laos had little to offer financially, the French’s interest soon diminished.

World War II ended French rule, and Japan occupied the area. When the war was over, the returning French encountered Laotian independence aspirations, rooted in Japanese times. It was partly forces that, for fear of Vietnam, were prepared to cooperate with the French, and partly the radical Lao Issara, which was supported by Vi那tminh and who was ready to take up arms. In 1946, a French-Lao Agreement was signed, which restored the Lao Kingdom as a unit. The French interest was still fixed on Vietnam. Consequently, Laos was able to gain limited independence within the French Union as early as 1949.

The Kingdom of Laos, with the capital Vientiane, gained independence from France as a result of the Geneva Conference on Indochina in 1954. From the beginning, there was already the breeding ground for a future conflict in Laos by the fact that the armed resistance movement, Lao Issara, from the war against France was allowed to be regrouped into two of the country’s provinces. Domestic politics was marked in the period 1954-73 by the struggle between the Laotian government, led by Prince Souvannaphouma, and the Communist Pathet Lao, successor to Lao Issara and led by Prince Souphanouvong. In the shadow of the Vietnam conflict, the contradictions were polarized. The Laotian government, along with right-wing forces and military groups backed by the United States and Thailand, stood on the American side; Pathet Lao was in alliance with North Vietnam and the FNL. Large-scale fighting erupted in the early 1960s. US intervention, which include involved bombing of areas controlled by Pathet Lao guerrillas as well as the supply route through Laos between North and South Vietnam, Pathet Lao played into the hands and undermined the government of Vientiane. A ceasefire was concluded in 1973, when Pathet Lao controlled 2/3 of the country. In 1975, Pathet Lao took over the land, the old kingdom was abolished, andThe Democratic People’s Republic of Laos was proclaimed.

The previously extensive US financial assistance ceased, and the artificial economy it created in the cities around the Mekong River collapsed. Socialist reforms were implemented, and foreign policy was oriented towards Vietnam and the Soviet Union. The old elite was eliminated; almost 10% of the population left the country, including trained administrators, teachers and technicians. In the latter half of the 1980s and early 1990s, socialist policy was loosened up. The collectivization of agriculture was abolished, and nationalized industries were sold or returned to the former owners. The collapse of communism in Eastern Europe resulted in economic crisis, as the Soviet Union was by far the country’s largest donor of aid – followed by countries such as Sweden, Australia, Japan and France. The result was political and, above all, economic reorientation. Improved relations with China since the late 1980s and with Thailand since the 1990s have led to a lessened dependence on Vietnam. This has led to a complex situation where Laos balances economic dependence on Thailand with continued political alliance with Vietnam, at the same time as both economic and political relations with China have become increasingly important. Laos also benefits from ASEAN membership to broaden its foreign relations. Due to its economic dependence on Thailand, Laos was also affected by the financial crisis that hit the region in the late 1990s. Extreme fluctuations in the exchange rate and reduced demand for export goods at least temporarily halted the trend towards market economy.

History of Laos
Tagged on: Laos