In the early 1820s, the American Colonization Society philanthropic organization organized a colony on the coast of Liberia for the purpose of repatriating freed slaves from the United States to Africa. The colony was named Liberia in 1824, and its capital became Monrovia (named after US President James Monroe). Liberia became an independent republic in 1847 with a constitution that, based on the American model, was based on a division of power. Until 1892, approximately 16,400 black former slaves are estimated to have immigrated from the southern states of the United States. To this was added 5,700 Africans freed from slave ships by British or American warships. The freed slaves and their descendants, the Americo-Liberians, established themselves as a political, economic and social elite in the new country. Their True Whig Party (TWP) ruled the country continuously from 1877 to 1980, not least because the indigenous peoples had long lacked voting rights. After years of border disputes with the colonial powers France and Britain, the borders of Liberia in 1892 were established by treaty. To see more information other than history, please visit Abbreviationfinder to learn more about climate, population, government, and economy for the country of Liberia. 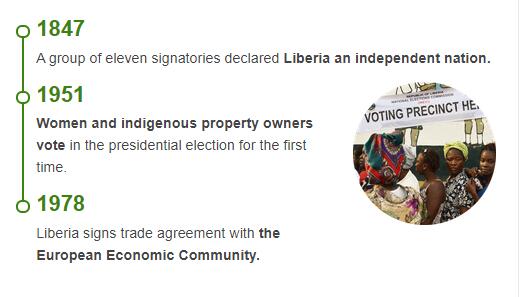 Until World War I, Liberia was financially oriented towards Europe with Germany, the United Kingdom and the Netherlands as its main trading partners. Thereafter, American influence increased sharply. In the 1920s, for example, in exchange for a loan, Firestone Tire & Rubber Company was granted the right to lease vast areas for rubber plantations. The company became the country’s largest private employer and rubber Liberia’s most important export commodity. William Tubman, president 1944–71, seemed determined to merge the Americo-Liberian elite (about 3 percent of the population) with the majority of indigenous peoples and introduced universal suffrage for men, later for women, all within the framework of a one-party state. He further stimulated foreign investment through economic open-door policy, including in the mining industry (for example, the Lamco consortium).

The power-monopoly of the American-Liberian elite was broken by a military coup in 1980, when President William Tolbert was assassinated. The coup leader, Sergeant Samuel Doe of the Krahn people, abolished the constitution and ruled dictatorially until 1984, when a new constitution was adopted and a provisional parliament was appointed. A year later, Doe – probably through electoral fraud – was elected president. In December 1989, Liberia from the Ivory Coast was invaded by a rebel force called the National Patriotic Front of Liberia (NPFL), led by former civil servant Charles Taylor, and civil war broke out. The invasion was interpreted as an attempt by Taylor to restore the power-monopoly of the American-Liberians, which weakened during Doe’s government.

At the initiative of Nigeria, in 1990, a West African peacekeeping force, formed by the regional cooperative organization ECOWAS, was sent to Liberia to prevent Taylor from taking the capital Monrovia. Doe, however, was captured and murdered by a rival NPFL faction. A civil interim government under Amos Sawyer was formed by the peacekeeping force, but Taylor continued to control most of the countryside. During the early 1990s, the number of regionally or ethnically based armed factions increased, and the conflict also helped to trigger a civil war in neighboring Sierra Leone. The war drove over 600,000 Liberians into refuge in neighboring countries and nearly one million became homeless in the country. At least 150,000 people were killed.

A series of peace agreements enforced by ECOWAS failed to put an end to the fighting. First, the eleventh agreement, signed in Abuja (Nigeria’s capital) in 1996, led to a ceasefire and the formation of a transitional government. Subsequently, general elections were held in 1997, which resulted in Charles Taylor being elected president with just over 75 percent of the vote and his National Patriotic Party (NPP, formed from NPFL) gaining a large majority in both the House of Representatives and the Senate.

Taylor formed a broad unity government, but new problems arose almost immediately. Already in 1999 new fighting broke out in northwestern Liberia, where former militia leaders formed the guerrilla movement Liberians United for Reconciliation and Democracy (LURD). At the same time, Liberia became increasingly diplomatically isolated due to Taylor’s support for the rebel movement RUF in Sierra Leone. EU aid was withdrawn, and in 2001 the UN imposed economic and political sanctions on Liberia. In 2003, LURD advanced to Monrovia, at the same time as a new militia called Movement for Democracy in Liberia(MODEL) entered Liberia from Ivory Coast. MODEL had been recruited mainly among the Krahn people and consisted in part of supporters of former President Doe. In June and July, fierce fighting was fought inside Monrovia, with severe hardships for the civilian population as a result. After a peace treaty was signed in early August, Taylor went into exile in Nigeria, where he was later extradited to Sierra Leone via his home country to face war crimes. A transitional government led by Gyude Bryant, representing one of the smaller parties, took office in October. ECOWAS sent a peacekeeping force of about 3,500 men, which at the end of the year was transformed into a UN force called UNMIL. This was expanded in 2004 to close to 16,000 men, of which about 230 Swedish soldiers. The Swedish squad was withdrawn in November 2006.

General elections were held at the end of 2005. In the presidential election, former Finance Minister Ellen Johnson Sirleaf, who formed a government consisting mainly of experienced trade experts, prevailed. Through powerful anti-corruption measures, the new government was able to gradually re-integrate Liberia into the international community. The UN sanctions were lifted and the country received promises of debt restructuring and new credit opportunities.

In 2006, a Truth and Reconciliation Commission was appointed whose task was to investigate the human rights violations committed in 1979–2003. The final report recommended that some 50 politicians should be banned from holding public office for the next 30 years. One of those affected was Ellen Johnson Sirleaf, who before the Commission acknowledged that she initially supported Charles Taylor’s rebellion in 1989. For that, the president apologized, but she has nevertheless been criticized for her actions. Many have also expressed dissatisfaction that the reconstruction work has been slow, despite strong economic growth during the second half of the 1990s. Corruption has continued to be a problem in the country, although Johnson Sirleaf has appointed an anti-corruption commission.

After all, Johnson Sirleaf ran for president in 2011. Shortly before the election, she was announced that she was one of three women to be awarded the Nobel Peace Prize this year, which was questioned given the imminent election. In the first round, Johnson Sirleaf received 44 percent of the vote against Winston Tubman’s 33 percent. Ahead of the two crucial rounds between the two crucial elections, Prince Johnson declared he would support Johnson Sirleaf. Tubman, with former football star George Weah (second in the 2005 presidential election) as vice presidential candidate, eventually chose to boycott the second round. The day before the election, violent demonstrations degenerated, but the election was held as planned and Johnson Sirleaf’s time in power was extended by six years.

In the 2017 presidential election, George Weah eventually won with Vice President Joseph Boakai second. Weah received the strongest support already in the first election round, but the second round was postponed after the election result was appealed. In the election to the House of Representatives, Weah’s party for Congress for Democratic Change (CDC) and United Party (UP), to which Johnson Sirleaf and Boakai belong, became the two by far the largest parties.

In early 2014, the largest outbreak of ebola fever ever spread from Guinea to Liberia, among others.

History of Liberia
Tagged on: Liberia