Some paleolithic and mesolithic finds are known. During the Neolithic and Bronze Age, the Danube farmland culture and early metal culture reached the area. Remarkable metal finds from the Hallstatt and Latene cultures have been made, and a significant fortified settlement, a so-called oppidum, has been excavated (Aleburg). In ancient times, the area was divided by the Roman provinces of Gallia Belgica and Germania Superior. 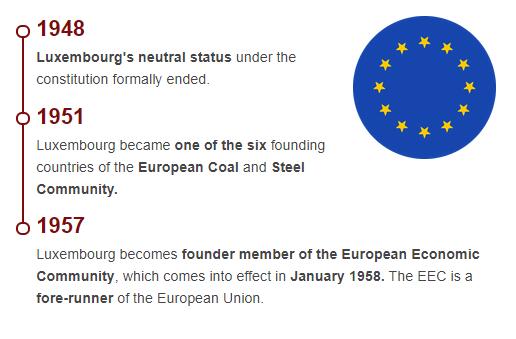 During the 400s, Luxembourg came under Frankish control and later became part of the Carolingian empire. From 963 Luxembourg emerged as an independent political entity. The Counties, after the 1354 Dukes of Luxembourg, dynastically played a significant role in European development. Four Luxembourg rulers became German-Roman emperors after 1312, when Henry of Luxembourg was elected emperor under the name of Henry  VII. To see more information other than history, please visit Abbreviationfinder to learn more about climate, population, government, and economy for the country of Luxembourg. This man succeeded in getting his son Johan crowned king of Bohemia in 1310.

In the 1440s, the princes of Burgundy gained control of Luxembourg, and through the so-called Burgundian inheritance, Luxembourg in 1477 passed to the Habsburg house. In connection with the Dutch revolt against the Habsburg Empire in the latter part of the 16th century, Luxembourg belonged to the territories which, under the name of the Spanish Netherlands, remained under Habsburg’s rule. France tried to gain control of Luxembourg during the latter part of the 17th century, but after the Spanish war of succession (1701–14), Luxembourg was instead assigned to Austria as part of the Austrian Netherlands.

During the Revolutionary War, Luxembourg was incorporated in 1795 with France as the Département des Forêts. At the Vienna Congress of 1814–15, Prussia claimed Luxembourg but had to settle for minor parts. The majority came as part of the Grand Duchy of the newly created, united Kingdom of the Netherlands but at the same time was a member of the German Confederation. When Belgium broke out of the Netherlands in 1830–39, a majority in Luxembourg wanted to unite with Belgium, but instead the area was divided. Western Luxembourg became the Belgian province of Luxembourg, while the remainder under the name of the Grand Duchy of Luxembourg was united with the Netherlands in the personnel union. In connection with French and German claims to Luxembourg and the dissolution of the German Confederation, Luxembourg’s international status was regulated by a conference in 1867, which guaranteed the country’s neutrality and independence.

Luxembourg was occupied by Germany during the First World War, and the reigning Grand Duchess Marie-Adélaïde was forced to abdicate after the war in favor of Sister Charlotte. Luxembourg, which during the 19th century industrialization became a center for iron and steel handling, wanted an economic union with France but, because of Belgian requirements, entered into a similar union with Belgium in 1921.

After the war, Luxembourg has been active in Western and European cooperation as a member of organizations such as the Brussels Pact, the Western European Union, the Coal and Steel Community, NATO, the EC and the EU. Luxembourg, which has close economic cooperation with Belgium and the Netherlands (Benelux), has become an important financial center.