Archaeological activities in Malaysia have so far concentrated on relatively few finds, and many dates are still uncertain. The people (Homo erectus) who inhabited Java about 1.5-1 million years ago may have reached there via the Malacca Peninsula; yet, however, no traces of them have been found in either West or East Malaysia. In addition to a difficult-to-date, possibly paleolithic find, several Mesolithic settlements in the Hoabinh tradition have been occupied in Western Malaysia (compare the Hoabinh culture). There are similarities between the hunter and gatherer population of these settlements and the current monkhum-speaking “indigenous population” (orange asli). During the 2000s BC agricultural communities began to occur, probably under the influence of developments in Thailand.

In eastern Malaysia, stone-age finds have been found in cave dwellings at Madai (in Sabah) and Niah (Sarawak); at the latter site dating from about 40,000 years ago to metal-using periods AD. To see more information other than history, please visit Abbreviationfinder to learn more about climate, population, government, and economy for the country of Malaysia.

It is unclear when Austronesian-speaking peoples first reached the Malacca peninsula, but probably Indian-influenced Malay minorities existed along its shores already during the centuries immediately preceding Kr.f. From the 700-1200s, however, the region was dominated by major national formations such as Srivijaya in Sumatra, Singasari in Java and Sukhothai in Thailand. In the 1300s, Islam probably reached present-day Western Malaysia. 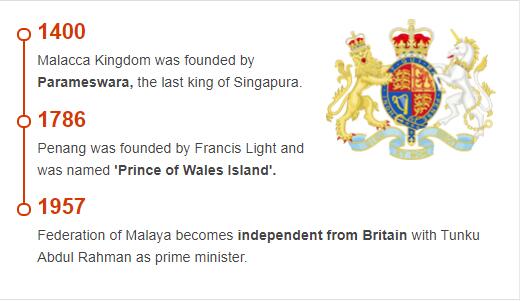 The Malacca peninsula has been named by the city of Melaka, which was the center of a sultanate of the same name and which during the 15th century developed into Southeast Asia’s most important port and trading town. It was conquered by the Portuguese in 1511 but played a crucial role in the emergence of a Malay identity and culture in the following centuries. The people of Melaka called themselves Malays, practiced Islam and spoke Malay, a long-used trade language in the region. Language and way of life were crucial to who was Malay, not descent, and Hindu-Buddhist and animist groups could therefore assimilate with the Melaka culture.

The Dutch entered Melaka in 1641. New, small sultanates took over some of the trading activities, and at the beginning of the 19th century there were about ten states. By this time, Chinese began to settle in the Sultanate on the west coast to trade but, above all, to extract tin. Communities grew up around the mines. Kuala Lumpur and Ipoh. The tin extraction and good conditions for plantation cultivation attracted British capital and strengthened the British ambitions. They had acquired a bridgehead in Penang in 1786, founded Singapore in 1819, and took over Melaka from the Dutch in 1824. In 1914, they had effectively subjugated all states. The indigenous sultans remained heads of state and ceremonial leaders, but it was the British who exercised power through their colonial administration.

The British Malaya that was created was a multi-ethnic society. Millions of Chinese came from southern China to work in the mines, and Tamils were imported from India to work on the plantations. In 1800, 90% of the peninsula’s residents were Malays, but by 1931 their proportion had dropped to 45%. The Chinese then made up 39% of the population. They had largely settled in the emerging cities and taken control of the local business world, while the vast majority of Malaysians remained in the countryside and used the land.

The Japanese occupation of 1941-45 became a historic turning point. The British were defeated, while political tensions grew between the Chinese and the Malays. The Sultans and Malay administrators cooperated with the Japanese, while important parts of the kings community offered strong resistance, including within the framework of the Malayan Communist Party (MCP). After Japan’s surrender, political life was organized along ethnic lines. The Malays established the United Malays National Organization (UMNO) in 1946. The same year, the Indians established the Malayan Indian Congress (MIC). The Chinese Malayan Chinese Association(MCA) was created in 1949. The formation of UMNO was a direct result of the British’s attempt to create a unified state with equal rights for all population groups. The Malays, who considered themselves the legitimate residents of the peninsula, reacted strongly, and the British were forced to change their policies. When the Malaysian Federationformed in 1948, the rights of Indians and Chinese were limited. The MCP, dominated by the Chinese, began armed struggle. The uprising, which took place in 1948-58, propelled a political alliance between the non-communist organizations UMNO, MCA and MIC; these received 81% of the vote in the first federal elections in 1954. This laid the basis for a release from the United Kingdom, and the Malaysian Federation became independent in 1957. In 1963, the State of Malaysia was created through a merger of the Malaysian Federation, Sabah, Sarawak and Singapore. In 1965, Singapore was excluded from Malaysia.

Societal development after independence has rested on an alliance between a Malay administrative elite and Chinese businessmen, compare State Condition and Politics above. The country is in the form of a parliamentary democracy, but personal alliances, brother-in-law and economic rewards have been important elements of politics. The ethnic tensions have been kept in check by intensive but discreet work on the part of the security police, but also thanks to strong economic growth, which has resulted in a higher standard of living for large sections of the population.

History of Malaysia
Tagged on: Malaysia