The Maldives became a Muslim sultanate in the 13th century, after the former Buddhist population was converted to Islam. The islands were a British protectorate in the period 1887-1965, but the British did not interfere in internal affairs.

In 1965, the Maldives became independent, and three years later the Sultanate was abolished by a referendum. President Maumoon Abdul Gayoom ruled the country as a one-party state for 30 years. During this time, the country’s economy developed gradually. After a riot in 2003, Gayoom pledged to introduce democratic reforms and expand political freedom.

The Maldives introduced a new constitution and a multi-party system in 2008. Dealing with major economic challenges and the direct impact of climate change on the archipelago are key political issues, in addition to religion and tourism.

In recent years there has been much political unrest. The authorities have been hard at political demonstrations and have received international criticism for disrespect for fundamental human rights. 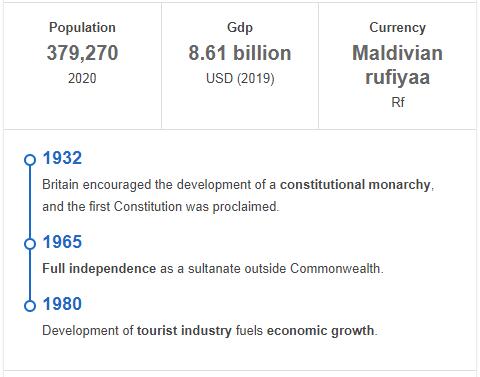 The first inhabitants of the Maldives probably came from India and Sri Lanka. Thor Heyerdahl’s excavations in 1982–1983 uncovered pre-Muslim remains from Hindu and Buddhist times.

The first king of the Maldives was Sri Maharabana, who was crowned in 1137. The Buddhist population was converted to Islam in the 1100s, Islam became the official religion of the country in 1153 and the Maldives became a sultanate. The Portuguese occupied the islands in the 16th century and ruled for 17 years; this is the only longer period where the islands have been completely under foreign power.

The Maldives became an independent British protectorate in 1887, but the British did not interfere in internal affairs and never had a governor on the islands. To see more information other than history, please visit Abbreviationfinder to learn more about climate, population, government, and economy for the country of Maldives. In 1957, the British established an air base on the island of Gan on the southernmost atoll of Addu. This base was closed down in 1976.

The Maldives became an independent Sultanate on July 26, 1965. The Sultanate was abolished in 1968 when the Republic was established.

Amir Ibrahim Nasir, who was prime minister in 1954–68, was the first president of the archipelago in 1968–1978. He was succeeded by Maumoon Abdul Gayoom, who was president in 1978-2008. The president must be renewed every five years by first being elected by parliament and then approved by a referendum.

Several coup plans against Gayoom were revealed in the 1980s. In 1988, mercenaries, for the most part Tamils from Sri Lanka, invaded through the sea. India sent a rescue force and struck down the coup attempt. President Nasir, who was living in exile in Singapore after a corruption affair, was accused of being behind.

After 17 years of work, a constitutional commission in 1997 presented its proposal for constitutional reform. Among other things, it meant that several candidates could stand when Parliament elected the country’s president. The following year, five candidates voted in the presidential election, but Gayoom nevertheless got all the parliamentary votes and more than 90 percent in the referendum.

The Constitution extended the civil rights. Parliament, which changed its name to the People’s Majlis after the Constitution, opened for party politics in 2005 for the first time. Before this, political parties were banned, although there was no prohibition on political activities.

The authorities have received international criticism for a lack of respect for fundamental human rights. Opposition demonstrations have been brutally beaten by the police several times.

Mohamed Nasheed was strongly involved in international climate issues, declaring that the Maldives would become the first carbon-neutral country in the world. Nasheed was a well-known human rights activist and critic of Gayoom’s monarchy. Nasheed wanted to change the constitution and allow other believers to be able to practice their religion in the Maldives.

In 2012, Nasheed was arrested and charged with abuse of power, and Vice President Mohamed Waheed Hassan took over as president. Nasheed said he had been threatened to step down as president, claiming the charges against him were politically motivated. In the 2013 election, Abdulla Yameen won a pinch victory over Nasheed.

In March 2015, former President Mohamed Nasheed was arrested for 13 years, charged with terrorism. This led to mass protests from his supporters, who believed the charges were politically motivated. In October of that year, Vice President Ahmed Adeeb was arrested because President Yameen claimed he was behind a planned killing attempt.

In November 2015, the state of emergency was declared due to large demonstrations in support of the arrested ex-president Mohamed Nasheed. Protesters were arrested by security forces and several online newspapers were closed. Nasheed was granted political asylum in the UK in 2016. In the same year, the Maldives decided to leave the Commonwealth of Nations.

At the February 2018 presidential election, opposition leader Ibrahim Mohamed Solih won a surprising victory over incumbent President Abdulla Yameen. Yameen was accused of hitting hard on his opponents in the election campaign, including arresting a number of opponents. Maldives politics is characterized by the rivalry between China and India. The US and India were very pleased with Solih’s electoral victory, while Yasmeen had linked the Maldives closer to China, including through increased Chinese presence in the Indian Ocean in recent years.

Tourism has expanded rapidly in recent years. The authorities are concerned about the influence of mass tourism on Maldivian culture and traditions. Restrictions have been introduced and tourist facilities may only be built on uninhabited islands. There are about 90 so-called tourist islands. Tourism suffered a setback when the island kingdom was hit by the tsunami disaster in December 2004.

Maldives is very low above sea level and in 1989 came on the UN list of nations most exposed to global warming, if the sea level continues to rise. 80 percent of the land is 1 meter or less above sea level. Rising sea levels are likely to exacerbate existing environmental pressures in the Maldives, such as water shortages. The Maldives have therefore had an active role in international climate negotiations, and the authorities are keen to identify potential strategies for adapting to rising sea levels.

History of Maldives
Tagged on: Maldives