Objects groups from the Middle Palaeolithic have been found in the southwest, and finds have been made of microliters from about 10000 BC. From about 6000 BC is derived from settlements of a more permanent nature in i.e. Uuteidat and Kouronkorokale. Stone artifacts for long-distance trade were produced in The Oueyan Valley from about 5000 BC Livestock management is known from about 3300 BC, but agriculture first about 800 BC. In the Djenné-Djeno on the Niger Inland Delta occurred from the 100 century BC. ironmaking, increasing urbanization and rice cultivation. During the first millennium AD Western Mali came to be dominated by the Ghanaian kingdom. 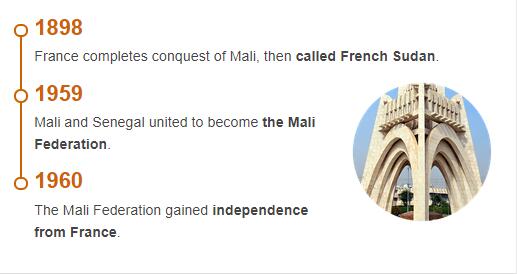 In the triangle between the Sahara desert and the upper reaches of the Senegal and Niger rivers, man-speaking peoples founded around 1200 the so-called Mali Empire, which at its peak during the 1300s reached the Atlantic in the west and beyond Timbuktu in the east. The economic basis was the caravan trade with the Islamic kingdoms of the Mediterranean, mediated by the Berber (including Tuareg), which brought gold and slaves from Mali in exchange for salt from the mines of the desert. The Mali royal family and the merchants were Muslims, the mass of the population retained their traditional religion. Timbuktu developed into a major religious and cultural center. The Mali kingdom then went back and was conquered by Morocco in the 16th century. By that time, Europeans had also established factions on the Atlantic coast. Trade sought new roads, south and west towards the sea, not north through the desert. Western Sudan thus came economically into the backwater. To see more information other than history, please visit Abbreviationfinder to learn more about climate, population, government, and economy for the country of Mali.

Around 1800, the region was reached by a new Islamic offensive. Muslim fulani created a great kingdom north of the Niger curve, and by the middle of the century Umar Tal, a Caliph over a Muslim order, built a state including both fulani and the bambara men (whose language is now the region’s lingua franca). Another man, Malinke, was given a state-building leader in Samory Touré (born circa 1830, died 1900).

Around 1860, France began colonial expansion from its Senegal bridgehead. Tribes and Muslim empires, including Samorys, were gradually subjugated. By the turn of the 1900, the conquest was completed, and the area under the name French Sudan became part of the vast but mostly poor French West Africa. The French abolished slavery but used forced labor to build the railway from Koulikoro (in Mali) to Dakar (in Senegal), which is still used. In World War I, 49,500 French Sudanese soldiers participated in the French armies; only 20 percent survived. The returning soldiers played an important role in the independence process.

Then paint the independence

When the French colonial empire dissolved after World War II, French Sudan, now called Mali, formed a short-lived federation, the Mali Federation, with Senegal (1959–60). Among other things, the Federation cracked down because the leader of Mali’s ruling party, Modibo Keïta, who counted from the Mali kingdom’s founder Sundiata Keita (dead circa 1255), wanted to pursue a radical anti-French and eastern bloc-oriented policy.

During Keita’s presidential term, Mali became a one-party state. Keïta was overthrown in a 1968 military coup led by Moussa Traoré, who remained a dictator, supported by the one-party system. He was deposed by a military coup in 1991 and sentenced to death for embezzlement and the shooting of protesters. The sentence was converted to life imprisonment and in 2002 he was pardoned. Neither Keïta, who pursued a socialist policy, nor Traoré, who was more market-oriented, could solve Mali’s financial problems. During the Provisional Government that took office in 1992, a new democratic constitution was drafted. In the 1992 general elections, the Alliance pour la democratie au Mali (ADEMA), and its candidate Alpha Oumar Konaré (born 1946) won) won the subsequent presidential election. He was re-elected president in 1997.

Konare’s presidential term was filled with conflicts caused by both economic austerity policies and difficulties in the transition from military dictatorship to multi-party democracy. Party fragmentation within the opposition reinforced ADEMA’s dominance over several years, which in turn created a distrust of the political system. The general elections were characterized by a very low public interest. Nevertheless, Mali was seen in the outside world as a democratic and economic example for Africa, and the country was granted large debt write-offs. The general elections in 1997 were characterized by unrest and boycott demands. Konaré was re-elected with close to 96 percent of the vote after having appealed to the opposition to stand for a counter-candidate. The first round of the parliamentary elections was annulled by the Constitutional Court, and when it was re-done, three months delayed, it was boycotted by a large part of the opposition. The result was a total dominance in the Parliament of ADEMA, which sought to strike a conciliatory tone by incorporating a number of opposition politicians into the government.

After a number of legislative changes, including a decision on state aid to political parties, the opposition in 2000 decided to fully participate again in the electoral process. Ahead of the 2002 elections, 16 opposition parties formed the Alliance Espoir in 2002, the largest of which was Rassemblement pour le Mali (RPM), formed the year before by former Prime Minister Ibrahim Boubacar Keïta. The popular former general Amadou Toumani Touré, who led the coup in 1991 and gave the country democracy, ran in the presidential election as an independent candidate. He got the most votes in the first round and also won in the second round. In the parliamentary elections, ADEMA gained a scarce majority before the RPM, after which Touré formed a broad unity government.

In the 2007 elections, Touré and ADEMA were again victors. The president was re-elected with 71 percent of the vote and one of the ADEMA-led alliances received 113 of the 147 seats in parliament. Touré was deposed in a military coup in March 2012, just over a month before the presidential election where his successor would be elected. The leader of the national council formed by the coup makers, Captain Amadou Sanogo (born circa 1972), assured that he would surrender power to elected politicians as soon as the army could again guarantee the security of the kingdom. The background to the coup was the fighting in the northern part of the country that again flared up between the army and Tuaregic rebels.

Difficult periods of drought 1970-74 and 1984-85 hit particularly hard against the Tuareg regime in the northern parts of the country; Thousands died, others went to neighboring countries or cities. When thousands of Tuaregans returned north from Mali in the early 1990s, a conflict erupted with the resident population and Tuaregis made an armed uprising. The fighting lasted until 1996, when the Tuaregians agreed to voluntary disarmament. By then, thousands more had died, and 120,000 were on the run in neighboring countries. Even then, sporadic disturbances have occurred in the north.

In 2011, hundreds of well-armed Tuaregans returned from Libya, where they served as mercenaries for the Khadafi regime in the civil war in 2011. A newly formed Tuaregian rebel group, the Mouvement national pour la libération de l’Azawad (MNLA), launched an offensive against the significantly worse in early 2012 equipped the Malian army. Dissatisfaction with how the government handled the situation led to the military coup in March. However, the junta that took power quickly lost control of the northern part of the country, and since the MNLA took the cities of Gao and Timbuktu, the independent state of Azawad was proclaimed, but this was not recognized internationally. The junta isolated by the outside world then gave up and Parliament’s President Dioncounda Traoré (born 1942) was appointed interim president.

A collaboration between the Islamist organization Ansar al-Din, which is believed to have links to al-Qaeda, and the MNLA soon went into conflict and during the summer of 2012 Ansar al-Din took control of northern Mali. In Timbuktu, the Islamists destroyed a number of cultural buildings that were included on the UNESCO World Heritage List. According to reports, punishments under Islamic law, such as mutilation and stoning, also began to be meted out in the area.

Since 2009, the armed group al-Qaeda in the Islamic Maghreb (Aqim) has also been active in the country. The movement, whose members are largely Algerian, operates in the desert areas of Algeria, Mauritania, Mali and Niger, where, among other things, they have carried out a series of kidnappings.

When the rebels around the end of 2012/13 also threatened southern Mali, the government received military support from France and ECOWAS, and the rebels were directed north. Presidential elections were held in July and August 2013 with the result that Ibrahim Boubacar Keïta was elected new head of state. Her party, Rassemblement pour le Mali (RPM), won the parliamentary elections at the end of the same year. Keita re-elected 2018.

History of Mali
Tagged on: Mali