Mauritius was known by Arab and Malay mariners from ca. 1000 AD, and the island probably had no native population. Portuguese seafarers visited the island in the 16th century, but did not settle. 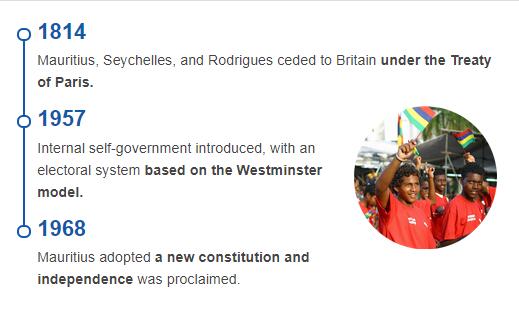 The first European colonization came with the Dutch 1598-1710, which gave the island the name Mauritius, and for two periods sought to establish permanent settlements. In 1712, the French East India Company took over the island, which they called Île de France. In the 18th century, French colonists developed a plantation economy with sugar as the most important product and with slaves from East Africa and Madagascar as labor.

The island was a French colony from 1715, but was occupied by Britain in 1810 and formally became a British colony in 1814. After the abolition of slavery in 1835, the bulk of the workers were imported from India, and still the majority of the island’s population is of Indian origin. To see more information other than history, please visit Abbreviationfinder to learn more about climate, population, government, and economy for the country of Mauritius.

The first political party in Mauritius was formed in 1936 – the Mauritius Labor Party (MLP). It advocated expanded voting rights and labor law reform, and built a base in the working class on the island. In 1947, a new constitution with a people-elected assembly and expanded voting rights was introduced, and the first elections held in 1948 were won by MLP. Under the leadership of Seewoosagur Ramgoolam, the MLP also won the following elections, but in competition with the Party of Mauritius (PM), which sought to break the political dominance of the Indian majority.

A form of internal self-government was introduced in 1964, and elections were held in 1967. A group led by MLP gained a majority; 44 percent of the population supported parties that opposed independence. In January 1968 there were riots over the issue of independence. Twenty-five people were killed, the state of emergency was introduced and British troops deployed.

On March 12, 1968, Mauritius became an independent state within the British Commonwealth. Ramgoolam became the country’s first prime minister and leader of an MLP-led coalition government.

Mauritius is one of the very few African states that has maintained both a civilian rule and a multi-party system ever since independence. This is not least attributed to widespread tolerance for political opinions – and an electoral system that ensures that the various ethnic groups are represented in parliament. The political picture has first and foremost been characterized by frequent changeable party and personal constellations, rather than party political stability.

After independence, the foremost opposition to Ramgoolam came from the radical Mouvement Militant Mauritius (MMM), led by Paul Bérenger. At the 1982 elections, MMM formed an alliance with the Socialist Party Mauritius (PSM), which won a clear majority, after which Aneerood Jugnauth became prime minister, Bérenger’s finance minister. In 1983, Jugnauth formed a new party, the Mouvement Socialiste Militant (MSM). A proposal to make Mauritius a republic was voted down that year, but after a constitutional amendment, the republic was nevertheless introduced in 1991, however within the British Commonwealth.

After the 1995 elections, Prime Minister Jugnauth was succeeded by MLP leader Navin Ramgoolam – the second peaceful transfer of power to the opposition since independence. After the election in 2000, Jugnauth returned as prime minister, with Bérenger as deputy prime minister and finance minister, based on electoral cooperation between MSM and MMM. In accordance with the agreement between the two parties, Bérenger assumed the post of prime minister in 2003. This was also the first time the prime minister’s post was held by a person who did not belong to the Indian/ Hindu part of the population; Bérenger is of French descent. At the 2005 elections, Navin Ramgoolam returned to power at the head of an opposition alliance, the Alliance Social, consisting of MPL and several smaller parties.

Widespread riots broke out in 1999, with four fatalities and significant material damages as a result, after a popular singer died in the arrest following a demonstration to legalize marijuana. The rebellion was the most serious in three decades, and was considered to be the result of social tensions in Mauritanian society.

Located in the Indian Ocean, Mauritius is both culturally and economically at the intersection of the two continents. Politically belongs to Mauritius Africa and is a member of the African Union, but much of the economic contact is directed eastwards. Mauritius has pursued an alliance-free foreign policy with close ties to Africa, but also with contacts to Europe and Asia.

The establishment of the Indian-Ocean Rim Association (IORA) in Mauritius in 1997 emphasizes the country’s special background and location. IORA will strengthen cooperation between states on both sides of the Indian Ocean. The secretariat for the 20-member organization was established in 2000 in the capital of Mauritius Port Louis. At the same time, Mauritius has close ties to southern Africa, and in 1995 became a member of the Southern African Development Community (SADC).

Mauritius has been a driving force in cooperation between the states also in the Indian Ocean. Much of foreign policy has concentrated on regaining sovereignty over the Diego Garcia Atoll, which before independence was separated and incorporated into British territory in the Indian Ocean. After 1960, the atoll was leased to the United States, which later built a military base there. All the approximately 2000 inhabitants of the archipelago were forced to move to Mauritius and Seychelles to make room for the base, and along with their descendants, they have since struggled to return. In 2000, Mauritius upheld a UK law for the expulsion of its citizens was illegal, and they were upheld in several UK courts for their claim to the right to return to their home country. However, the citizens, who were granted British citizenship, have been rejected by the British government, which in 2008 was also supported by the House of Commons. The case led in 2004 to Mauritius threatening to withdraw from the British Commonwealth.

History of Mauritius
Tagged on: Mauritius