Merida is a charming cultural city in Mexico. The city of Merida is the choice of a tourist interested in culture in Mexico.

Merida is a city of about 1.5 million inhabitants in Mexico on the Yucatan Peninsula. Merida, which has retained its small-town feel, is known for its beautiful buildings and lush parkland such as the Zocalo, where you can watch local musical performances. The Paseo de Montoje park street with its magnificent palaces is a nice place for a day trip.

Merida is the cultural capital of the Yucatan Peninsula, known for its beach resorts, known for its quality museums and short distances to historic Mayan ruins. Merida is an excellent base for travelers who want to explore the rich heritage of Mayan culture.

You can spend a beach holiday at the destination by traveling to the village of Progreso, for example, about an hour’s drive away. Cancun, the region’s most popular beach resort, is just over a three-hour drive away.

There are shopping opportunities in the city

Merida is a good shopping city with an affordable price level. Discoveries can be made in both local small boutiques and American-style malls. Most commonly, tourists buy local handicrafts, pottery, and jewelry from Mexico. Colorful Mexican-style hammocks are also popular souvenirs.

Bargaining is especially important in the market – however, remember that the deal should remain in the good mood of both parties. Because of a few euros, you shouldn’t worry about hours.

Local flavors on the hunt

A vacation in Mexico would be nothing without learning about the local cuisine. Finnish tourists accustomed to Tex mex restaurants will experience surprising food experiences in Merida: tacos made from soft wheat tortillas are the most popular fast food in Mexico, with fresh fillings and tasty spices.

Mexican food, despite its reputation, is not hot – the spiciness of the portion can be adjusted yourself with the help of sauces brought to the table.

Tequila, considered a traditional Mexican drink, is also a popular gift to take home. In the evenings, the margaritas enjoyed in the Merida’s bars can later be prepared in your own home kitchen.

Good to know about Merida

Merida is the choice of a tourist interested in Mexican cultural history and city life – those who crave a beach holiday should head to the beach resorts of the same peninsula.

Merida is a safe travel destination that, despite its large population, does not have the atmosphere of a hectic million city. However, it is a good idea for tourists to keep in mind the basic precautions for pickpockets, for example. It is also not natural to move alone in the dark.

Finnish tourists do not need a visa for a holiday trip to Mexico. The best time to travel to Merida is in the winter or spring – Mexico has a hurricane season from June to November.

FLIGHTS, ACCOMMODATION AND MOVEMENT IN MERIDA 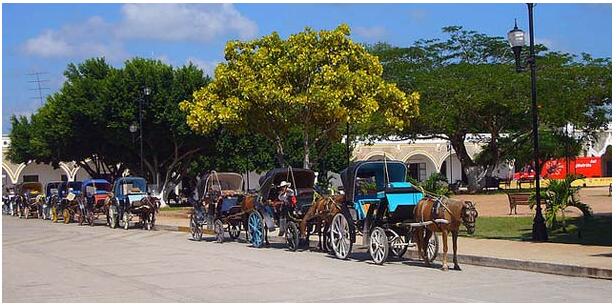 Merida is not one of the most common package travel destinations in Mexico, but a few Finnish tour operators offer package tours to the destination. However, the destination usually operates on a self-catering basis without guide services.

Trips to Merida are usually made via Cancun Airport, which is about a four-hour drive from the destination.

The price range of accommodation is wide

Merida, like the big cities, has a lot of choice when it comes to accommodation. Hotels can be found at low-cost luxury options, and backpackers have their own hostels.

Getting around the city

In Merida, it is easy to get around by local buses, whose tickets are very cheap. When traveling by taxi, the price must always be agreed with the driver in advance. Renting a car doesn’t do anything in Merida’s maze of alleys, but you can consider renting a car if you want to make self-guided excursions to nearby areas.

Popular outing games in Merida also include horse-drawn carriages, which can be used to fold a trip like a taxi or hire a driver for a city ride.

Located in Merida’s central square, Plaza Grande, San Ildefonso Cathedral is the oldest church on the continent, completed as early as the late 16th century. The cathedral is known for the huge cross and statue of Christ rising on the altar.

There are several world-class museums in Merida that are worth picking up at least a few options of interest during your stay. One of the city’s most famous attractions is the Anthropological Museum, where you can discover, among other things, the Mayan culture of the area.

Tourists interested in art can head to the Museum of Folk Art, the Museum of Contemporary Art or the Juan Gamboa Guzman Art Museum. There is also interesting painting in the Governor’s Palace.

Expedition to the Mayan ruins

Merida is an easy excursion to famous Mayan ruins such as Chichan Itza, one of the seven wonders of the world. Another famous Mayan city is Uxmal, surrounded by jungle, whose archeological sites cater to tourists interested in history. Both ruined cities are UNESCO protected sites.

It is worth noting that getting around in ruined cities can be difficult for people with reduced mobility.

The zoo invites families with children

Families with children on holiday in Merida spend time at the Centenario Zoo, where you can see lions, tigers, hippos and exotic birds, among other things. There is also a museum of natural history next to the zoo.

THE BEST OF MERIDAN

Experience these in Merida