The best time to go to Milan

If you ask Italians in the rest of Italy, Milan is always grey, wet and mostly foggy.

That is only partly true. Although it can rain all year round in Milan, the months of October, November and April have the most rainy days .

From November to March , the fog is particularly common and can be so dense that you can hardly see the other side of the street. So not exactly ideal for sightseeing.

In summer, on the other hand, it can get very humid. The months of July and August are particularly hot , with temperatures exceeding 35 degrees.

Our tip for the best time to travel to Milan is definitely autumn and spring . In the months of May to June and September to October there is a good balance of as few rainy days as possible and pleasant temperatures.

According to Allcitycodes, Milan is very well connected and you can easily reach the city with any means of transport.

Arriving in Milan by plane

Of course, the quickest way is by plane. Milan has three international airports : Linate, Malpensa and Orio al Serio.

The airports are at different distances from the center, but you still need about 45-50 minutes to get to the center from all three.

The best way to compare flight tickets is to use Skyscanner , our favorite flight search engine.

The largest of Milan’s airports is Malpensa. You can reach it from all major cities in Germany.

Malpensa is also well connected to the center. In addition to the Terravision shuttle bus , you can also take the Malpensa Express train directly to the main station in the center. The journey to the city also takes about 50 minutes.

You can get the cheapest flights with low-cost airlines to Orio al Serio Airport, which belongs to the neighboring city of Bergamo.

Orio al Serio is the furthest from Milan, but the Orioshuttle shuttle bus runs to Milan Central Station every 30 minutes. The journey takes about 50 minutes.

Linate Airport is located near the city, about 8 kilometers from the center. You can only get to the Domplatz from Linate with the normal city bus (line 73), which takes about 50 minutes.

However, direct flights to Milan Linate are only available from Düsseldorf and Frankfurt am Main .

Arriving by car: where to park in Milan?

You can easily reach Milan by car from the south of Germany: It is about a 6-hour drive from Munich .

However, hotel parking can be quite expensive. The most central hotels even charge up to around 50 euros per day for this . If you don’t want to pay, you can park in a separate parking garage and then reach your accommodation by public transport or on foot.

However, if you don’t absolutely need the car in Milan, you should rather switch to the train or the plane . So you don’t have to deal with the traffic in Milan and looking for a parking space.

Milan has a well-developed metro system, as well as bus and tram connections . So if you want to stay outside of the old town, you can still get to the center by bus and train.

The metro lines are marked with the letter “M”, i.e. M1, M2 etc. There are currently four in total, the fifth is still under construction (as of 2022).

So if you’re looking for the nearest subway station, look out for a big red “M” .

Normal tickets cost 2 euros and are valid for 90 minutes. A 24-hour ticket costs 7 euros. You can also take the tram with the same ticket.

You can get tickets in tobacco shops, at newsstands or in the subway stations.

Attention : the Milan metro only runs until 12:30 a.m., the tram until 2:30 a.m. But there are night buses that then replace the metro.

How many days do you need for Milan?

It is best to give yourself at least three days . Milan is big and the city’s attractions are fairly scattered. You also need some time for shopping!

No, at least no more dangerous than Berlin , London or Paris . However, do not leave any valuables in the car and always take good care of your bag, especially in the crowded metro.

Milan is the most expensive city in Italy. Overnight stays in the historic city center cost at least 200 euros per night, a meal in a simple restaurant around 30-40 euros per person.

But if you book a hotel outside of the old town, you can save a lot of money, for example. But it’s best to make sure that it’s near a metro station.

What is a must-see in Milan?

If you are short on time, you should definitely visit the streets around the cathedral. There are several highlights here: the Galleria Vittorio Emanuele, the Teatro alla Scala, the fashion square and the Brera district. 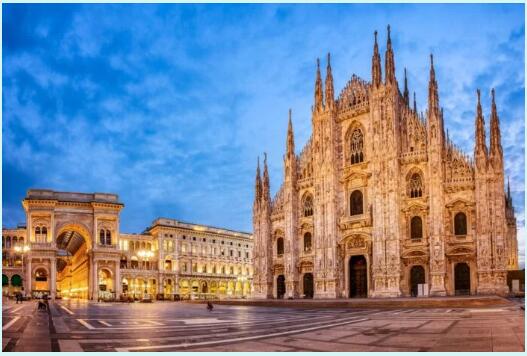