The oldest traces of people date back to the early Stone Age (about 200,000-100,000 years before today). Late Paleolithic settlements (between 40,000 and 12,000 years old) have been found in the southern parts of the country. From the 4000s to the 2000s BC the economic base seems to have been made up of hunting and fishing, while a gradual transition to agriculture in southern and eastern Mongolia took place during the 11th century BC. At the transition from the Bronze Age to the Iron Age (first millennium BC), nomadic livestock management became the dominant nutritional form.

Between the third century BC and the first century AD mentioned in Chinese sources, the Xiongnu tribal federation in Mongolia. This federation is sometimes considered (on uncertain grounds) by the people known in Western sources as females. However, whether xion gnu is to be regarded as “ancient Mongols” is unclear. Those from 130 AD However, xianbei known in this area are generally regarded as Mongols. 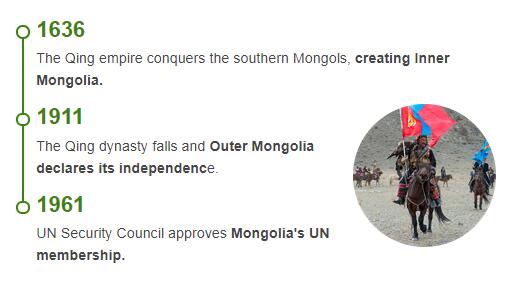 Since Xiongnu lost its power, the territory was ruled completely or partially by several different state formations up to the 1100s, among which the Turkish khanate (552-745) followed by the Uighur khanate (745-840) were the most important. After the area was united under Djingi’s Khan in the 13th century, but under its successors again split, Mongolia came in the 17th century under Manchu-Chinese supremacy. To see more information other than history, please visit Abbreviationfinder to learn more about climate, population, government, and economy for the country of Mongolia.

In connection with the Chinese Revolution of 1911, Mongolia (then Outer Mongolia) declared itself under the country’s religious leader Bogdo Gegen (1869-1924) and with Urga (from 1924 Ulaanbaatar) as its capital. Independence was tolerated in 1915 by China, which in 1919 again occupied the country. In 1921, the Chinese were defeated by the Russian general Roman von Hungary-Sternberg, whose occupation of the country led to a civil war that was waged on both sides with great cruelty. Mongolian revolutionary units led by Damdiny S邦chbaatar (1893-1923) and Chorloogijn Tjojbalsan succeeded in 1921 in collaboration with the Soviet Red Army to defeat the occupiers, and a provisional government led by Bogdo Gegen was established. On his death in 1924, the Mongolian People’s Republic was proclaimed with the Tjojbalsan as its leader.

The new state was organized according to the Soviet pattern with a supreme Soviet called Ich chural. The friendship agreement signed with Soviet Russia in 1921 meant that the continued development in Mongolia was entirely in accordance with Moscow’s guidelines. The socialization was carried out gradually, and during the 1930s the Lamaist community was extremely brutally crushed. A Stalinist colored cult of the Tjojbalsan was introduced. With the Soviet Union, a new friendship treaty was concluded in 1946, which was renewed again in 1966. Even before the death of the Tjojbalan in 1952, Jumdjaagijn Tsedenbal had emerged as the country’s true leader. His long time in power meant a cultural and economic stagnation period. Mongolia joined the UN in 1961.

The political transformation of the Soviet Union in 1989 led to widespread demonstrations in Mongolia, and political changes were forced in March 1990. The leadership of the Communist Party (MFRP) was forced to resign, and the party renounced the Communist ideology. Parliament (Chural) was strengthened, political parties were legalized and Punsalmaagijn Otjirbat (born 1942)) was named President of the country. The first relatively free elections were held in July 1990, and the MFRP then got a majority of seats in Parliament. In June 1992, despite a growing social and economic dissatisfaction, the MFRP won 70 of the 76 seats in the newly formed parliament Chora. A new constitution was adopted in January 1992. The same year, the last Soviet troops left Mongolian territory, and the country’s official name was changed from Mongolian People’s Republic to Mongolia. Relations with China have subsequently improved.

The MFRP, which in 2010 changed its name to the Mongolian People’s Party (MFP), has maintained its position as one of the country’s two dominant parties and won the parliamentary elections in 2000, 2004, 2008 and 2016. However, the opposition candidates have won all presidential elections since 2009. President since 2017 is Chaltmaagijn Battulga, representing the Democratic Party (DP), which became the largest party in the 2012 parliamentary elections.

History of Mongolia
Tagged on: Mongolia