Nepal’s history is characterized by the geographical and cultural function of the country as a bridge between India and Central Asia. Nepal has had many self-governing kings with great power, and for many years has been relatively isolated from the outside world. The forerunner to Nepal is the small mountain state of Gorkha. In the 18th century, Gorkha, under the leadership of King Prithvi Narayan Shah, conquered a number of small neighboring states. Shah conquered Kathmandu in 1786, laying the foundations for the Kingdom of Nepal.

The mighty Rana family had power in the country from 1846 to 1951, and the king in the country was deprived of political power. The Rana family ruled by making the Prime Minister’s title heritable. In 1960, King Mahendra took power in a coup, disbanded the parties and arrested several political leaders. Nepal was an absolute monarchy for 30 years, until democracy was introduced in 1991.

The desire to remove the country’s constitutional monarchy led to the bloody Maoist insurgency that began in 1996. Nearly 15,000 people were killed in the fighting during the 10-year civil war (1996-2006). In 2006, a peace agreement was signed between the Maoists and the parliamentary government. 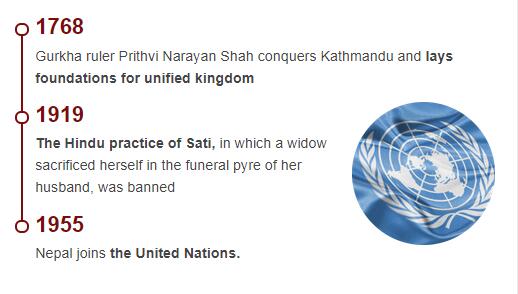 Nepal’s early history is characterized by the geographical and cultural function of India as a bridge between India and Central Asia. While southern districts are populated by ethnic groups with close ties to India, the neighborhood of Tibet has been dominant in the north. Buddha was born in Lumbini on the Indian border. To see more information other than history, please visit Abbreviationfinder to learn more about climate, population, government, and economy for the country of Nepal.

The oldest chronicles of newari mention dynasties from the time before our time, but so far neither archeology nor inscriptions have been able to shed light on this period.

The Licchavi kings ruled in central Nepal (Bagmati) from around 350–750. They came from Northern Bihar in India and had close links with the Guptad dynasty. There are inscriptions in Sanskrit from this time. The city of Patan southwest of Kathmandu was already founded in 299. It was called Lalitpur and had Buddhist stupa; also Charumati near Kathmandu has Buddhist monuments. Otherwise, the Licchavit era bears the mark of Hinduism. It is obvious to believe that both main directions, both Vishnuism and Shivaism, were tolerated.

During the Thakurik kings (750-1000), political conditions were characterized by Tibetan domination. The present capital, Kathmandu, which until the 16th century is called Kantipur, is to be founded in 723. In 899, the third of the cities of the Bagmati Valley became: Bhaktapur (Bhadgaon) east of Kathmandu. After the year 1000, Shivaism became the dominant religion. This is linked to a similar development in Northeast India, where tantrism became more or less prevalent at this time.

Around 1150, Nepal came under the Karnataka kings, who had come to Bihar from southern India and from there to southern Nepal. But in the 1300s, they had to relinquish power to the Mallad dynasty, which ruled until 1768. The Mallad became a heyday of Nepal; then the Newar culture reached its peak. Bhaktapur was the capital.

During Muslim ravages in India, Hindus sought refuge in Nepal. Among these refugees were written both Sanskrit and Maithili, and the Newarians, who had lived in the Bagmat Valley for ages, noticed. In particular, the dramatic poetry flourished. The wooden architecture and visual arts that still characterize Patan, Kathmandu, Bhadgaon and other cities were shaped in the Mallat era.

Nepal has never been colonized, but both India and the United Kingdom have for a long time ruled foreign policy.

In 1768–1769 Prithvi Narayan Shah (1723–1775) laid down the Kathmandu districts. The Mallad dynasty asked the East India Company for help, but had to capitulate as the aid did not reach. Prithvi Narayan had started his bloody campaign from Gurkha further west. The new ruling family was called the Gurkhad dynasty, and their language became the official language of Nepal, the Gurkhali. While the Malls were Buddhists, the new rulers were Hindus. Inscriptions show that there was an infiltration of cucumbers in Kathmandu long before the conquest of 1768.

Conflicts with Tibet soon broke out. As late as in 1730 had the small states of northern Nepal paid tribute to the Chinese Manchu -keiserne. The Gurkhas stopped this and moved into Tibetan territory. The Chinese responded with a campaign against Nepal, which in 1792 had to agree to pay taxes. Only in 1856 did this end, as a peace treaty with China forced the Tibetans to pay annual tribute to Nepal. They did so until 1953.

Conflicts also arose with the British. The border disputes culminated in war in 1814-1815; Nepal had to forgo large border areas and allow a British resident in Kathmandu. Following this, Nepal chose an isolationist policy. The king eventually became a shadow ruler. The power lay with the First Ministers, who from 1846 to 1951 belonged to the Ranas family. It was purely federal, and promises of reforms after the Second World War were not fulfilled. Especially it was the Newarans, who were not allowed to use their own language for a long time.

Nepal’s Congress Party (NPC) was formed in 1950 according to Indian model, and received support from the king. But the prime minister deposed the king, who had to flee to India. After Indian mediation in 1951, there was a kind of reconciliation between the king and the democrats on the one hand, and the Rana party on the other.

The power concentration of the genus was eventually broken. Under King Mahendra (1955-1972), Nepal was given a new constitution, which introduced the country’s first democratic system. In the first election, the moderate-socialist Congress Party gained an absolute majority, and the first parliamentary government was formed. But in 1960, the king seized power by a coup, dissolved the parties and arrested several political leaders.

Party politics was replaced by the panchayat system by the Constitution of 1962. This indirect system ensured the king’s concentration of power, and the possession classes retained power at the local level.

During King Birendra (1972–1990), considerable dissatisfaction with the authoritarian regime arose. After severe turmoil, the king organized a referendum in 1980, and the panchayat system was confirmed by a scarcely majority.

Until 1990, Nepal was one of the world’s few absolute monarchies. A bloody public uprising, in which hundreds were killed, provided breakthroughs for democratic reforms. A new constitution in November 1990 deprived King Birendra of his almost monarchical power. The king now became a constitutional monarch.

Frequent change of government crippled the administration and slowed economic development. In the period 1990-2005, 15 different governments had power, on average one change of government per year. People’s confidence in the new democratic system was weakened. The many new parties were characterized by internal divisions and personal struggles, corruption and abuse of power. Upset factional fights also split the traditional Congress party, with a breakaway wing led by Sher Bahadur Deuba and the “old” NPC, led by veteran Girija Prasad Koirala.

The militant Maoist Communist Party of Nepal’s Communist Party (Maoist) (NPC-M) and its fighting organization, Nepal’s United People’s Front (UPF), became a serious challenge to the governing powers. On February 13, 1996, the Maoists sent a parole on the “People’s Liberation War.” The aim of the “war of the people” was to make radical social and political changes. With China’s revolutionary leader Mao Zedong as the guiding star, the rebels would rule the monarchy and make the Hindu kingdom a communist people ‘s republic following the pattern of the culture-revolutionary China in the 1960s.

The Maoists waged an intense armed struggle. The guerrillas gradually spread from the original core area in the west to most provinces. The government sought to overcome the Maoist revolt with favorable loans to smallholders and other financial incentives. Another instrument was stricter anti-terror laws.

In June 2001, the nation was shaken by a massacre of almost the entire royal family. Crown Prince Dipendra reportedly went drunk in a drunken state following a quarrel with her parents about choosing her husband. King Birendra, Queen Aishwaraya and eight other members of the royal family were shot dead by automatic weapons before the Crown Prince shot himself. The murdered monarch’s younger brother, Gyanendra, was appointed new king.

The Palace Massacre created an acute crisis of confidence among the people. The Maoist guerrillas took advantage of this for a new major offensive. The government responded with even stricter security laws; the army was now deployed in the war with full weight. After new government crises, Sher Bahadur Deuba took over as prime minister in the fall of 2001. Failed peace talks were followed by new Maoist push. The government struck with a state of emergency throughout the country. In 2002 alone, more than 4,000 people were killed.

In October 2002, King Gyanendra proclaimed that he had personally taken over the executive power. The Deuba government was disbanded and the House of Representatives dissolved. Leading politicians labeled the king’s intervention as a constitutional “royalist coup”. According to the Constitution of 1990, the king was almost to be a symbol figure.

At the turn of the year 2002–2003, the rebels had almost control over more than one-third of the land area. After six months of ceasefire, the war flared up again in full in August 2003. The conflict was now further brutalized. Humanitarian organizations have criticized both the Maoist guerrillas and the government forces for gross human rights violations, including arbitrary liquidations and widespread use of torture. The conflict fled many.

In July 2004, the king bowed down and took Deuba to his mercy again as head of government. On February 1, 2005, the king again reversed, set aside the constitution, deposed the Deuba government and took his own power over the board. Deuba was sentenced by the King’s Corruption Commission to two years in prison for corruption. The conflict between the king and an alliance of seven leading political parties was now further intensified.

The seven-party alliance entered into negotiations with the Maoists, and the parties reached a 12-point agreement in November 2005. The Maoists were willing to lay down their weapons on certain terms, including the convening of a constitutional assembly to decide the issue of monarchy or republic. The Maoists had announced a three-month ceasefire in September, but in January 2006 the war flared up again. The country was characterized by general strikes, curfews and demonstrations.

On April 14, 2006, King Gyanendra spoke on television in connection with the Nepalese New Year. When the king gave no signal of political change, thousands of people poured into the streets and demonstrated until King Gyanendra ten days later – April 24 – resigned power and reinstated parliament.

Girija Prasad Koirala, leader of Nepal’s Congress Party, was appointed as new prime minister in November 2006. The Maoist leader Prachanda and Prime Minister Koirala signed a peace agreement. Thus, the ten-year “civil war” ended. The conflict had killed about 13,000 people, most of them civilians.

History of Nepal
Tagged on: Nepal