New Zealand is one of the last large land masses inhabited by humans. Eastern Polynesians immigrated between 1250 and 1300 AD and developed Moorish culture.

Dutchman Abel Tasman came as one of the first Europeans in 1642 and named the archipelago New Zealand. In 1769 James Cook surveyed almost the entire coast and annexed the islands to the United Kingdom.

New Zealand participated in World War I with large forces on the Allied side and the Americans established military bases in the country.

In 1984, New Zealand declared the South Pacific a nuclear-free zone and the United States declared its defense obligations to the country. To see more information other than history, please visit Abbreviationfinder to learn more about climate, population, government, and economy for the country of New Zealand.

Since the 1990s, the activism of the indigenous people, including in connection with land control, has increased. 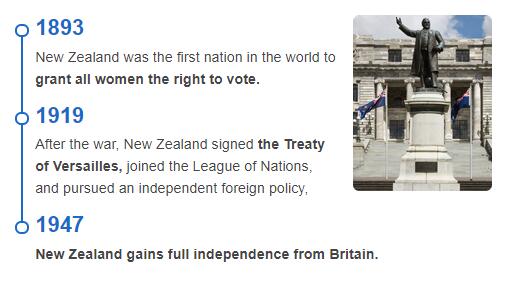 Dutchman Abel Tasman came to New Zealand in 1642 as one of the first Europeans and gave the archipelago its name. In 1769, James Cook visited the islands and began a more methodical exploration. He annexed them for the British crown, but the annexation was then not recognized by the government.

In the early 1800s British traders, whalers, adventurers and missionaries came and settled among the Moors. There were contradictions between the residents and the immigrants. In order to protect the interests of the British and to control the development, the Government of London in 1832 sent a magistrate to New Zealand.

Eight years later, the islands were formally made into British colony. Most Maori rulers submitted to Queen Victoria’s supremacy, but brutal repression began and the fighting lasted for over 30 years. In 1852, New Zealand became a self-governing colony, and in 1907 an independent state with dominion status in the British Commonwealth.

Domestic political reforms in the latter part of the 19th century made New Zealand a pioneer in social policy and democratization. Men were given general voting rights before 1880, women in 1893, age benefits to all over 65 were introduced in 1899, and advanced labor protection legislation and forced arbitration in labor disputes before 1900. There was state operation of heavy industry, railways and hospitals before such reforms were implemented. some western European country.

From 1891 sat a coalition of Liberal and Social Democrats with the government of the Conservatives won the election in 1912.

New Zealand participated in the First World War on the motherland side. The Conservatives retained power until 1935, when the Labor Party became the largest party. In 1936, the Conservatives and the Liberals joined forces in one party, the National Party. The country was relatively little affected by the international crisis that followed the Wall Street crackdown in the early 1930s and implemented a strong expansion of the economy and social system with 40 hours of work week (1936) and comprehensive national insurance (1938).

New Zealand participated with military forces in World War II, especially after 1941 when the country felt directly threatened by Japan. The Americans had bases in the country.

Politics has traditionally been dominated by the National Party and the Social Democratic Labor Party (Labor Party). These have since 1991 received competition from the Alliance, a coalition of five smaller left and center parties.

In the second half of the 1980s, Labor pursued a liberal market economy policy, winding up much of the state-controlled economy. The Social Democrats lost the election in 1990 when the National Party took over with James Bolger as prime minister.

Bolger’s three governments (until 1997) pursued an energetic free trade policy and abolished virtually all state subsidies. As a result, New Zealand’s economy, formerly one of the most regulated and protected in the world, became one of the most open and competitive. The position of the trade union movement was further weakened. In 1991 it was decided that the retirement age should gradually be raised from 60 to 65 years.

The Bolger government largely continued Labor’s economic policy, and could point to rising economic growth and falling unemployment. Drastic cuts in the social sector, along with far-reaching labor market reforms, sparked protests against what opponents called a “dismantling” of a welfare system that has had many similarities to the Scandinavian ones.

In a referendum in 1993, it was decided to replace the British-inspired election in one-man circles with a mixture of direct and ratio choices according to the German pattern. The first proportional representation election took place in 1996. Bolger continued as head of government, but in a coalition with an extremely nationalist party, the New Zealander First (NZF), which will restrict immigration. Jenny Shipley of the National Party’s right wing carried out a political coup in 1997 and took over as prime minister.

The 1999 election led to a regime change with Helen Clark as leader of a Labor government where the Alliance was also represented. After nine years of civic rule, Clark went hard to mark a new course. The trade union movement regained some of the rights that had been lost in the 1990s. The government promised greater assistance to the Polynesian indigenous people, the Moors, but was criticized for special treatment.

In 2002, the Alliance was split due to the government’s decision to send troops to the war in Afghanistan; Deputy Prime Minister Jim Anderton formed a new party: Progressive Party. In the 2002 election, Labor won 41 percent of the vote, while the National Party made its worst election in 70 years with just under 21 percent. Labor now entered into a government coalition with the Progressive Party.

Two new laws created political tensions. In 2003, prostitution was legalized. The following year came a partnership law that would apply to both gay and heterosexual couples. Nevertheless, the fiercest political controversy was about the demand of the Polynesian indigenous people, the Moors, for compensation for land and fishing rights. In the 1990s, compensation was paid to several tribes following separate compensation cases. A renaissance for the original Moorish culture led, among other things, to changing many place names according to demands from activist groups.

In 2004, the Clark government presented a bill that would allow the country’s beaches (the area to be eroded by ebb) and the seabed to be state-owned. A new party, the Maori Party, was formed in 2004, the same year the beach law was passed with the support of NZF. In the 2005 elections, Labor held the position, while the National Party almost doubled its membership. The Maori party was given four seats. John Phillip Key of the National Party was elected prime minister in 2008.