Nicaragua, located on the southern border of ancient Mesoamerican high cultures, belongs to the so-called circum-Caribbean archaeological zone (compare Central America, Prehistory). Nicaragua was influenced by Mayan culture, but the strongest Mesoamerican influence did not come until a few hundred years before the Spanish colonization, through the immigration of Nahuatlal people from central Mexico. 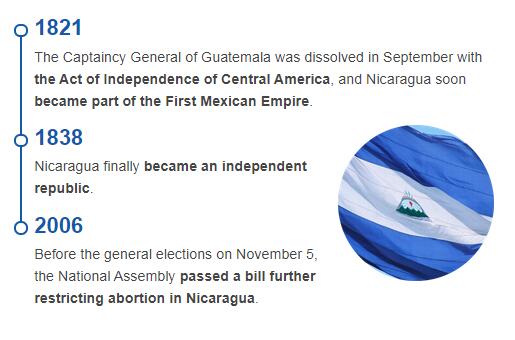 The Spanish conquered Nicaragua in the 1520s, and from 1570 and during the rest of the colonial era, Nicaragua was ruled from Guatemala. As early as the end of the 16th century, Nicaragua’s Atlantic coast was attacked by English pirates. The English presence in the area was gradually strengthened and received effective support by the Miskito Indians. During the years 1740–86, the Mosquito Coast was under British control. At the same time, Nicaragua was divided by the conflicts between the province’s two most important cities, Granada and León.

Nicaragua’s break with Spain occurred in 1821 in connection with Guatemalan Declaration of Independence. After a brief union with Mexico (1822–23), Nicaragua was incorporated into the newly formed Central American Union. After fifteen years of tearing apart conflicts, Nicaragua was declared independent in 1838. To see more information other than history, please visit Abbreviationfinder to learn more about climate, population, government, and economy for the country of Nicaragua.

Violent conflicts between conservative and liberal forces, anchored in Granada and León respectively, characterized the rest of the 19th century. Already in the 1840s, conflicts with other Central American states began, and a lengthy dispute with Britain over the Mosquito coast. President Tomás Martínez began a long period of conservative power in 1857. As a way of bringing peace between Granada and Leon, in 1857 a third city, Managua, was elected as the country’s capital. In 1893, the Liberals, led by José Santos Zelaya, were able to seize power. Zelaya was a hot supporter of a Central American Union. His involvement in the political development of the neighboring republics led in 1906 to war with Guatemala and El Salvador and in 1907 with Honduras.

A serious dispute with the United States over the right to build a channel between the Atlantic and Pacific led to Zelaya’s fall in 1909 after a successful conservative uprising backed by the United States. A long era of American involvement in Nicaragua’s politics began in 1912. In 1916, the United States was granted the right to build military bases in Nicaragua. César Augusto Sandino started a guerrilla war against the US Navy in 1928, who left the country in 1933. Sandino was murdered in 1934 on the order of Anastasio (“Tacho”) Somoza, head of the National Guard formed by the United States. In 1936, President Juan Bautista Sacasa was deposed by Somoza, who took over the presidential post in 1937. It was the beginning of the Somosa family’s brutal holdings of power, which lasted until 1979. Tacho Somoza was assassinated in 1956 and succeeded in 1957 by his son Luis. After a period with some of the family’s deputies in power, Somoza’s second son Anastasio (“Tachito”) became Somoza president in 1967.

In the early 1960s, various opposition groups formed the Sandinist Front for National Liberation (Frente Sandinista de Liberación Nacional, FSLN), named after César Augusto Sandino. The Sandinists began a guerrilla war against the Somozar regime, where the fighting took place mainly in the countryside. Large parts of the capital Managua were devastated in 1972 by a powerful earthquake with tens of thousands dead. International relief efforts came to the country but the regime and the Somosa family stopped most of the aid in their own pockets, which led to increased support for the Sandinists.

During the 1970s, opposition to Somoza grew in all parts of society and Pedro Joaquín Chamorro, publisher of the prestigious newspaper La Prensa, became one of the regime’s most important critics. He formed a party and called for civil protests against the regime but was assassinated in 1978. In response to the murder, nationwide strikes erupted and support for the FSLN’s armed struggle increased. In June 1979, the FSLN called for a general strike and a general uprising against the regime, and on July 19, the Sandinists entered the capital since Somoza fled the country.

The war had cost more than 30,000 lives, much of the country’s infrastructure had been destroyed and the economy was ruined. A provisional government was formed with the Sandinists at the forefront, which led to land reform being implemented, major parts of the economy being nationalized and a comprehensive literacy campaign launched. The Sandinists’ revolution initially received great support within the country and also internationally. UNESCO praised Nicaragua for its literacy campaign and the country received tremendous international attention.

At the same time, the contradictions within the Provisional Government grew stronger and criticism of the Sandinists’ claim to power grew. The FSLN’s close ties to Cuba and outspoken socialist policies prompted the United States to begin supporting Somoz supporters who launched an armed struggle against the new government. Initially, these groups, called contras, consisted mostly of military and police from the overthrown regime, but soon joined groups that jumped off cooperation with the Sandinists. In 1982, the Sandinese government introduced a state of emergency with reference to the armed assaults of various contras groups.

The CIA largely financed contras, for example through the sale of weapons to Iran in the so-called Iran-contras deal. The United States also supported the mining of Nicaraguan ports, leading to a conviction in the International Criminal Court. The Sandinists were supported by Cuba and the Soviet Union and the civil war became part of the Cold War.

The fighting harmed tens of thousands of victims and as much resources were concentrated on the war, poverty became even deeper. In 1984, general elections were held, and Sandinist leader Daniel Ortega was elected the country’s president. The US introduced a boycott of the country and the economy became increasingly dependent on the support of the collapsing Soviet Union. Although a ceasefire agreement was signed in 1988 between the government and the contras groups, the fighting continued. The consequences of the war and international isolation created a growing dissatisfaction with the Sandinists and in the 1990 presidential election, opposition candidate Violeta de Chamorro, widow of Pedro Joaquín Chamorro, won.

The war ended and Chamorro’s government ruled over the market economy policy, but unemployment rose sharply and despite the peace, people’s living standards dropped. Dissatisfaction among former army soldiers and contras rebels, who were promised land and work under the peace agreement, led to new fighting in the countryside.

Despite continued strong support, the Sandinists, which were divided into several different groups, weakened and in 1996 Arnoldo Alemán from the right-wing party Partido Liberal Constitucionalista (PLC) was elected president. He continued to liberalize the economy and privatized most companies the Sandinists had nationalized. Alemán also entered into a political pact with the Sandinis’ leader Ortega, who laid the foundation for a two-party system through barriers against other smaller parties. The economy started to grow, but the positive development was halted in 1998 by the powerful hurricane Mitch, which led to thousands of casualties and which broke down much of the newly built infrastructure.

The 2001 presidential election was won by Enrique Bolaños, also from the right-wing PLC, who was vice-president of Alemán. Although the party also had its own majority in parliament, the Bolaño government faced major problems after breaking with its former colleague Alemán, which he accused of corruption. The split in the PLC party led to a paralyzed government and worsening economic situation for the country.

At the end of 2003, Alemán was sentenced to 20 years in prison for corruption and fraud. Bolaños formed his own party, but the remains of the PLC settled with the Sandinists and succeeded in stopping much of the government’s policy. The Sandinists returned to power in 2006 through their presidential candidate Daniel Ortega, who had downplayed his earlier socialist policies in favor of a more market-oriented rhetoric and a conservative social policy. With Ortega’s support, a total ban on abortions was introduced.

The Sandinists did not have their own majority in Parliament but ruled with the support of the right-wing PLC, and in 2009 the Supreme Court annulled the verdict of corruption against former President Alemán.

Ortega implemented reforms to reduce poverty and gained momentum on the economy, including through increased foreign investment and an alliance with the Hugo Chavez government in Venezuela. Ortega was accused by the opposition of power-ups and after controversy and suspicions of cheating in the 2008 local elections, several countries that have long been major donors to Nicaragua, including Sweden, decided to withdraw their aid. Ortega pushed through a change in the constitution to make it possible for the president to be re-elected and then re-elected as candidate for the 2011 election.

Despite harsh criticism from other parties, Ortega’s popularity grew as he was seen by many as a guarantor of stability in a country plagued by wars and internal conflicts for decades. Support programs for the poorest and the expansion of schools and health care have also led to increased support.

In 2011, Daniel Ortega was re-elected with 62 percent of the vote while FSLN won a two-thirds majority in parliament.

History of Nicaragua
Tagged on: Nicaragua